Emerge Energy (NYSE:EMES) has had a mind of its own lately, as it has generally performed inversely to overall benchmarks. When the S&P 500 (SPY) or oil is down, usually EMES bucks the trend. However, on most market rallies, the company has had little to no volume trading in its shares.

Despite the inconsistency of participating with the overall market on a day-to-day basis, the general trend for EMES is up and constructive, and still resembles charts from its peers in the oil & gas space.

More importantly, EMES recently added an M&A specialist in Eugene I. Davis to the board of directors for cash considerations (not stock), which leads some people to believe that a takeover of some kind may be in the works.

This move comes as no surprise really since share prices reached the $2.00 level in 2018, where buyout territory can come into play for many companies, especially ones with quality assets and operations like EMES.

Consequently, I remain long EMES, regardless of takeover prospects, since the company has made the moves necessary to survive the 2016 oil & gas downturn, and is expected to implement a dividend soon. A takeover would just be icing on the cake.

Hi-Crush (HCLP) recently announced earnings that were not as poor as expected, considering the problems that frac sand producers faced in the fourth quarter of 2018, such as delayed completions from poor takeaway capacity, poor weather, exhausted E&P budgets, and lower oil prices.

Since EMES has almost completed building its two mines that were planned for two separate basins, as opposed to HCLP's two mines that are located in one basin, I believe revenues could surprise to the upside when EMES reports next.

This is due to the lack of traffic and local sand supplies that exist in the Eagle Ford Basin and Anadarko Basin, where EMES has a marked advantage over peers.

Also, Emerge's last mile strategy continues to progress and win market share through Solaris (SOI). The alliance also carries an advantage of sorts over HCLP because it is asset light, so costs and CapEx should be less of an issue for EMES vs. HCLP on the last mile front.

So, considering the advantages EMES has over peers with its comprehensive, asset-light strategies that span all basins, as well as its new in-basin volumes that should increase revenues significantly, I believe a takeover or a merger with a strategic partner makes sense at these depressed share price levels. Either this or bankruptcy is imminent.

On January 31, 2019, Eugene I. Davis was appointed to the board of directors (the "Board") of Emerge Energy Services GP, LLC (the "General Partner"), the general partner of Emerge Energy Services, LP (the "Partnership" and, together with the General Partner, the "Company"). The size of the Board was increased from nine to ten members in connection with this appointment. Mr. Davis was also appointed to the newly formed Special Committee of the Board.

For his services on the Board, Mr. Davis will receive an annual retainer of $360,000, paid in equal monthly installments in advance, and the remainder of which will be payable to Mr. Davis in a lump sum upon a termination of his service by the Company without cause, subject to his execution and non-revocation of a release of claims.

In such an event, the Company also has agreed to execute a general release of claims against Mr. Davis. Mr. Davis will have rights to indemnification pursuant to the First Amended and Restated Agreement of Limited Partnership of the Partnership.

The foregoing description is qualified in its entirety by reference to the Non-Employee Director Compensation Letter, dated January 31, 2019, by and between the Company and Mr. Davis, which is filed as Exhibit 10.1 to this Current Report on Form 8-K and is incorporated herein by reference.

As readers can see, not only was Mr. Davis given a board seat in 2019, but he was also given an "annual" retainer of $360,000. This language to me implies that he could be at EMES for over a year, and so the takeover may not be imminent.

However, the money he is being paid is nothing to scoff at. Large payments to someone like this from a company that doesn't have much money to afford it in the first place means EMES is taking the services of Mr. Davis very seriously, and one needs to look closer at the deal.

Who would employ such a person without the thoughts of M&A or hostile takeovers being kept in mind? To get a better idea of what EMES is trying to accomplish, a better understanding of Mr. Davis is needed.

Mr. Davis is a truly a legend in the field of M&A and hostile takeovers. As a personal investor, I am glad EMES has such a person on its team. But nothing I could say will do justice in describing this man's illustrious career.

So, here is a brief biography on Eugene I. Davis' extraordinary career in M&A taken from the Vici Properties LP website:

Since forming PIRINATE in 1997, Mr. Davis has advised, managed, sold, liquidated and served as a chief executive officer, chief restructuring officer, director, committee chairman or chairman of a number of businesses operating in diverse sectors.

From 1990 to 1997, Mr. Davis served as President, Vice Chairman, and director of Emerson Radio Corporation and from 1996 to 1997 as Chief Executive Officer and Vice Chairman of Sport Supply Group, Inc. He began his career as an attorney and international negotiator with Exxon Corporation and Standard Oil Company (Indiana) and was in private practice from 1984 to 1998.

I am not sure what others take from Mr. Davis' biography, and the connection that he has now with EMES. But, for me personally, I am just putting two and two together and assuming a takeover, restructuring, or merger of some kind is in the works.

In the case of a restructuring, investors who were holding the stock for a dividend reinstatement may be disappointed. At the same time, if EMES is taking the route of Hi-Crush and moving towards becoming a C-corp, then EMES could attract a new investor base and finally see shares rally again.

If it is a merger with a strategic partner, then that would make a lot of sense as well. More scale adds better cost savings and cross-selling opportunities, empowering both parties involved. Who this strategic partner would be is hard to say, and would be pure speculation at this point.

Regardless of whether EMES is being acquired, restructured, etc., I continue to believe in the company's original story, as in-basin frac sand is the backbone of oil & gas operations, and EMES will have two premier, in-basin mines online in 2019 that it didn't have in 2018.

I say premier because EMES has reported that customers rank its Eagle Ford mine very highly, as it is truly state of the art, and lies in a basin with less crowding and 10% higher proppant usage rates.

Believing in Emerge Energy's fundamental story (again, with or without the takeover) is only half of the battle. The technicals tell the other side of the story.

As investors can see below, Emerge Energy's share price has come down severely from its one-year highs of nearly $10 a share. However, a lengthy consolidation pattern is taking place at $2, and shares are resting on the 50-day moving average (blue line). 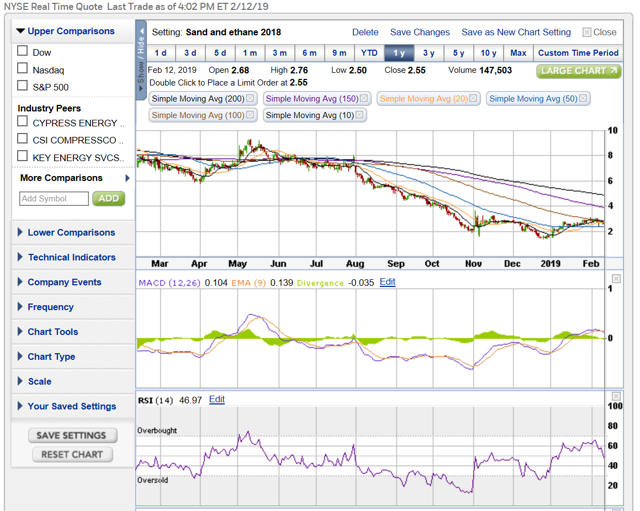 EMES is also displaying a healthy RSI at 50, and may see its MACD cross back to the upside.

The 100-day moving average does lie in the way, and has acted as resistance in the month of February. But it is converging with the 50-day moving average and making a volatility squeeze to the upside likely. This event, of course, is contingent upon oil stocks sustaining their rally from 2018 lows, and future earnings coming in at healthy levels.

In addition to the risks of general economic slowdowns, or more delays in completions by E&Ps as pipelines take longer than expected to come online, there is always the real risk that the appointee of Mr. Davis is not for the hopes of being taken over, hostile or not.

Rather, the enlisting of Mr. Davis' services by EMES could have been because bankruptcy is imminent. I doubt this is the case, as new mines are coming online, and new last mile services are being added by EMES.

Why would someone like Solaris partner with a bankrupt company in EMES? Why would EMES be signing new contracts with E&Ps? Surely these entities have done their due diligence on EMES, and would not risk having their operations disturbed in case of a failure on EMES's behalf.

Another risk is the dividend, which could be in danger not only from a restructuring with Mr. Davis, but also simply because conditions in the fourth quarter weakened more than investors expected.

So, even if a move away from an MLP structure occurs, EMES may not even have the funds on hand to resume its distribution policy in the first place. Investors looking for yield would be disappointed if this move occurred.

However, the share price appreciation potential is large for such a small market company like EMES (under 100 million), which happens to have been making real revenue in 2018, and is only expected to grow those revenues as volumes from new in-basin mines nearly double in 2019.

Emerge has a bullish fundamental story to warrant my investment, as it should finish expanding, and will be focusing on returning profits to shareholders in the coming years.

The chart is also showing a nice consolidation pattern for EMES after taking a major haircut from the highs, and the fact that 2019 is upon us (the year that pipelines come online and allow more completion activity) should provide the catalyst needed to push shares past resistance of the 100-day moving average.

Of course, the appointment of Mr. Davis to the board of directors for EMES seems to change the entire equation, as now investors like myself have to be wondering if a takeover, merger, or structuring is imminent. This could change the path towards dividend reinstatement for EMES.

Then again, Mr. Davis could just like the company so much and be providing so much expertise in the sand business that EMES feels compelled to hire him for his wisdom. Somehow this scenario seems unlikely, and change in some way is coming to EMES.

Regardless, assuming EMES is not doing this move out of bankruptcy, then the appointment of Mr. Davis seems to be like a positive no matter how one views the situation, since change is occurring to make the company stronger in the end.

As a result, I continue to stay long EMES for its bullish, long-term story, valuation, and new possible catalysts coming from the hiring of Eugene Davis.

Todd Akin
2K Followers
Graduated from the University of Houston- Downtown with a degree in Finance. My site, Wallstreetstocksolutions.com, focuses on portfolio management and unique investment opportunities.

Disclosure: I am/we are long EMES. I wrote this article myself, and it expresses my own opinions. I am not receiving compensation for it (other than from Seeking Alpha). I have no business relationship with any company whose stock is mentioned in this article.