Here are four charts that look at key aspects of the US and Eurozone economies: swap spreads, industrial production, equity prices, and exchange rates. By now everyone knows that the Eurozone has its problems, especially with the UK's bumbling attempt to exit the Eurozone trade agreement, France's violent protests, Germany's struggle to assimilate millions of Muslim immigrants, and Italy's refusal to address its fiscal deficit. But if you think things are bad in the US, you've been reading too much fake news. 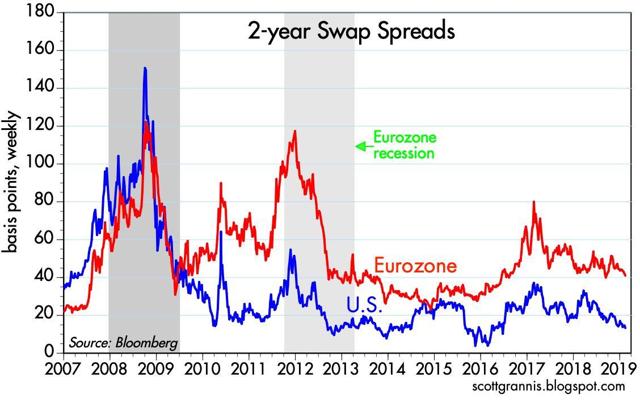 Chart #1 compares 2-yr swap spreads - my all-time favorite financial indicator - in the US and Eurozone. Here we see that swap spreads have been extremely well-behaved in the US, trading within a normal range of 10-30 bps for most of the past 5 years. This is a clear sign that the financial fundamentals of the US economy are sound: systemic risk is low and liquidity is abundant. The Fed has not made any move that would disturb this. The Eurozone, in contrast, has been struggling with above-average systemic risk and liquidity shortages for the better part of the past 3 years, even as many Eurozone bond yields trade in negative territory; low interest rates are not necessarily stimulative. Eurozone yields are low because growth and opportunity are in very scarce supply.

Note in particular how Eurozone swap spreads began to surge in the first half of 2011, some 3-6 months before a recession hit, and how they began to decline well in advance of the end of the Eurozone recession. This is yet more proof that swap spreads can be excellent leading indicators of economic and financial market health. I have more background on swap spreads here, and numerous charts on swap spreads over the years here. 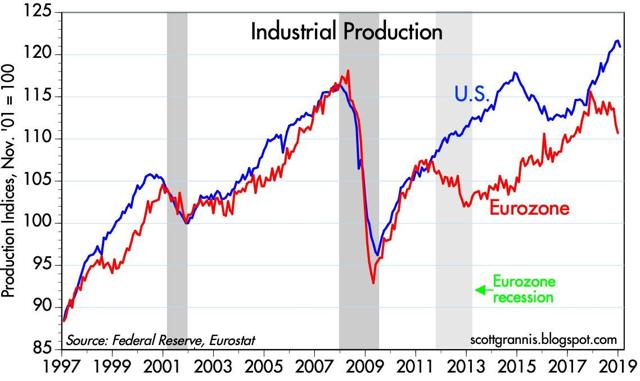 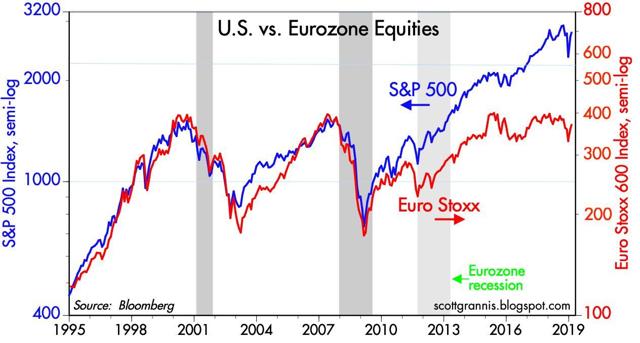 Chart #3 compares equity market performance in the US and Eurozone. Note how both markets suffered a setback in the run-up to the Eurozone's 2011-2013 recession, then proceeded to rally throughout the course of the recession. Equity markets can indeed be leading indicators of economic troubles, but not always. In any event, the industrial side of the US economy has zoomed far ahead of its Eurozone counterpart over the past decade. The US is, by this measure, the most dynamic of the advanced economies on the planet. 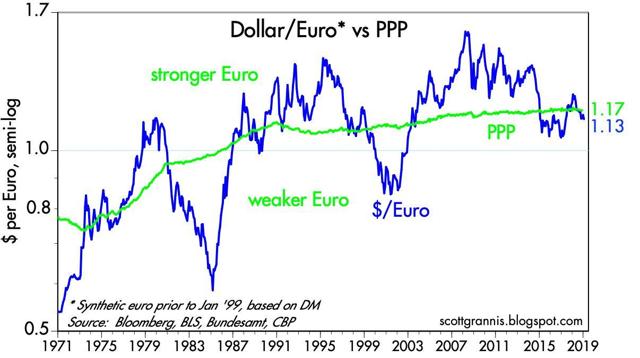 Chart #4 compares the value of the Euro/Dollar exchange rate to my calculation of the Purchasing Power Parity of the Euro. (The PPP value of one currency versus another is driven by changes in relative inflation, and in theory, it is the rate which would make prices in both economies roughly equal. In this case, since Eurozone inflation has been lower than US inflation since 1995, the PPP value of the Euro has been slowly rising since 1995.) Over the past decade, as Eurozone industrial production has lagged US industrial production (and by inference the US economy has outperformed), the nominal value of the Euro has been falling, from a high of 1.60 to now 1.13. This supports my view that the current strength of the dollar is largely driven not by tight money or higher interest rates, but by the fact that the US economy is simply a much more attractive place for capital.

Calafia Beach Pundit
55.54K Followers
Scott Grannis was Chief Economist from 1989 to 2007 at Western Asset Management Company, a Pasadena-based manager of fixed-income funds for institutional investors around the globe. He was a member of Western's Investment Strategy Committee, was responsible for developing the firm's domestic and international outlook, and provided consultation and advice on investment and asset allocation strategies to CFOs, Treasurers, and pension fund managers. He specialized in analysis of Federal Reserve policy and interest rate forecasting, and spearheaded the firm's research into Treasury Inflation Protected Securities (TIPS). Prior to joining Western Asset, he was Senior Economist at the Claremont Economics Institute, an economic forecasting and consulting service headed by John Rutledge, from 1980 to 1986. From 1986 to 1989, he was Principal at Leland O'Brien Rubinstein Associates, a financial services firm that specialized in sophisticated hedging strategies for institutional investors. Visit his blog: Calafia Beach Pundit (http://scottgrannis.blogspot.com/)
Follow
10 Comments