The U.S. Treasury will auction $8 billion in a new 30-year Treasury Inflation-Protected Security, CUSIP 912810SG4, on Thursday. Should you take a serious look? Probably not.

I've noted often that I'm not a fan of 30-year TIPS, partly because my investing style is to buy and hold to maturity. When this TIPS matures on February 15, 2049, I will be 95 years old. (Or, more accurately, I would have been 95 years old. Let's be realistic.)

But the 30-year term isn't my only gripe about these very long-term TIPS. While they appear to be solidly safe Treasury investments, they are highly volatile and can lose more than 10% of their value in a couple of months. Traders in TIPS might like that volatility. I don't.

The coupon rate and real yield to maturity for this TIPS will be set at the auction's close. An interesting side note: The Treasury is issuing $8 billion of this TIPS, compared with $7 billion of the same term in February 2018 and February 2017. That is a 14% boost in supply, reflecting rising federal deficits. Will there be enough demand to support a 14% boost in yearly supply?

On the positive side are two factors that make this auction somewhat attractive: 1) 30-year after-inflation yields have been climbing over the last two years and remain "relatively" high, and 2) the 30-year inflation breakeven rate has plummeted, making this TIPS more attractive versus a nominal 30-year Treasury.

At Friday's close, the U.S. Treasury was estimating a full-term 30-year TIPS would have a real yield to maturity of 1.10%, meaning it will outperform inflation by 1.1% over the next 30 years. Although that is well below the near-term high of 1.32% hit on November 2, 2018, it remains well above the sub-1% yields that have been common over the last two years.

So, yes, real yields for 30-year TIPS have climbed from the pre-2018 election lows, but remain rather unimpressive when compared to yields of just a few years ago. Here's that same chart stretched back to 2010, showing that 30-year yields were sharply higher before mid 2011, the dawn of aggressive Federal Reserve manipulation of the bond market.

Real yields began 2010 well above 2.0%, which I think should be considered the "optimal" real yield of a 30-year TIPS. But even as quantitative easing was winding down in 2014, the 30-year real yield climbed above 1.5%.

Today's real yield of 1.1% isn't attractive enough to be tempting.

With a 30-year nominal Treasury currently yielding 3.00%, this new TIPS should get an inflation breakeven rate somewhere around 1.9%, about 20 basis points below the results of recent auctions for this term. Clearly, inflation expectations have been falling sharply, and rightly so, as I noted in my recent article, 'Painful Truth: Inflation Protection Has Been A Losing Bet.' Inflation over the last 10 years has averaged just 1.8% and is currently running at an annual rate of 1.6%.

Here's a chart showing the trend in the 30-year inflation breakeven rate over the last two years, showing the extraordinary drop from about 2.16% in early October 2018 to 1.90% today:

I think this chart reflects reality: Despite massive efforts by the Federal Reserve since 2011 to rekindle inflation, and despite low unemployment, relatively strong economic growth and a towering federal deficit, overall U.S. inflation hasn't been able to climb above 2.0%.

Would I bet that inflation will average less than 2.0% over the next 30 years? No, I wouldn't. But I can understand how the market believes it is possible.

Conclusion: It's just too risky

I'll be ending this article with a results chart for all 29- to 30-year TIPS auctions since 1999. It's an interesting chart to study, even just to find that one TIPS that auctioned in October 1999 with a glorious real yield of 4.138%.

But the chart also shows the sharp price fluctuations for 30-year TIPS, even in the span of a few months. Last year, CUSIP 912810SB5:

What does it mean? It means that buyers at the June auction lost about 7% of their investment's value, in four months.

Thursday's 30-year TIPS auction will close to noncompetitive bids at noon and finalize at 1 p.m. EST. Normally, I post the auction results as soon as possible after the auction close, because ... well, I am the only person on Earth who writes about each TIPS auction. But this week, I am traveling in Vietnam, where the auction will close at 1 a.m. local time. (Today, I am writing from Hanoi.) Sorry! I will post an analysis when I can. Meanwhile, check this page for a results summary after 1 p.m. Thursday, if you are interested. 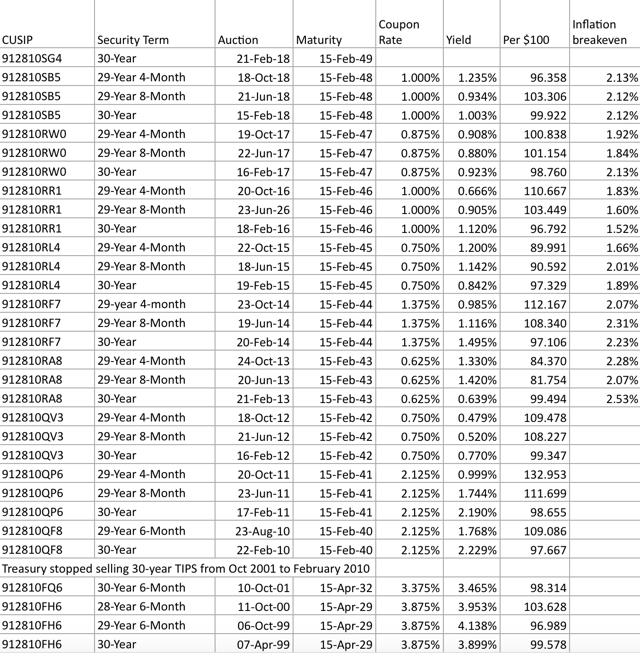