Pioneer Natural Resources (NYSE:PXD) reported a strong fourth quarter despite issues of inadequate takeaway capacity, lower oil prices, and exhausted budgets that weighed on the sector. This outperformance comes as no surprise when talking about a best of breed like Pioneer Natural Resources, which is more insulated from the above issues than smaller E&Ps.

The theme of the call seemed to be that PXD continues to debundle from larger oilfield services companies to save on well costs, particularly with sand, water, and pressure pumping services, and is also keeping production strong, even with a cut in CapEx. This points to the company's efficiency with capital spending, and also highlights a larger theme - which is that less CapEx does not necessarily equate to less production.

Therefore, I expect PXD's earnings to strengthen over the next quarter, as oil prices should rally on the backs of the recent OPEC cuts and China trade risks begin to diminish. I also continue to believe in E&Ps like Pioneer Natural for their ingenuity and ability to relentlessly save on costs while growing production, even in turbulent markets, and I am staying long the sector as a result.

As readers can see below, PXD stated in its latest conference call that CapEx was falling 11%, but production growth will still be strong at 15%:

Finally, the steps we took in 2018 will be really important when it comes to 2019 in the sense that we in our 2019 plan can point to a significant CapEx decrease about 11% compared to 2018, while at the same time delivering a strong 15% increase in production. So, we're very excited about what 2019 holds when we can show that kind of capital efficiency gains.

Sure, production growth is still down from the 20% rate that it has seen in times past. But for CapEx to fall double digits while production maintains a double-digit growth means that PXD is getting more bang for its buck, and this is, perhaps, because CapEx that was being used for drilling and exploration before is now being used for drawing down DUCs. 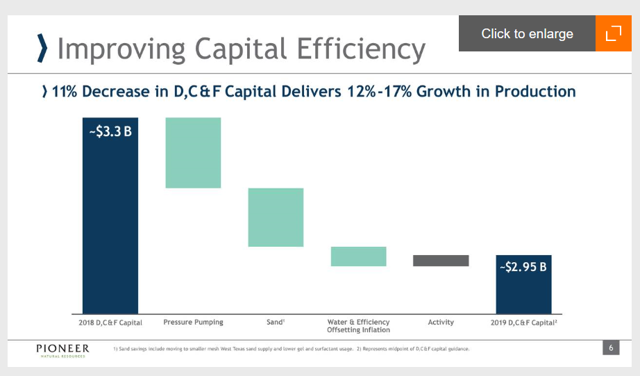 Of course, one has to assume that these efficiencies gained in the field are not solely what are causing production numbers to increase. Debundling from larger oilfield services players is also allowing PXD to save more money as well, and I would imagine increase the amount of activity possible, especially on the frac sand and pressure pumping side.

These debundling savings are due to the smaller nature of these companies that PXD is switching to, like ProPetro (PUMP) U.S. Silica (SLCA), and Emerge Energy Services (EMES), over the likes of the larger oilfield services players like Halliburton (HAL) or Schlumberger (SLB).

In the case of PXD switching operations to a smaller pressure pumper like PUMP, it will save the company an estimated $650,000 per fleet, again due to the more efficient business that a pure pressure like PUMP can have over a more diversified OFS player. This debundling theme is truly a gamechanger for PXD and the E&P industry, and a possible detriment to larger OFS companies.

Savings on the frac sand side are significant as well. It has been widely publicized that PXD is selling its Brady sand mine in order to get its frac sand needs met closer to well site, and is partnering with companies like Emerge and U.S. Silica, and this benefits all parties involved.

By closing its existing mines and going with pure-play, in-basin sand providers like EMES or SLCA, PXD will save $350,000-400,000 per well, as well as be able to focus all of its efforts in one area with more intensity and surety of supply.

In addition, by changing completion techniques and switching from coarser grades to pure 100 mesh sand, which EMES and SLCA currently provide, PXD saves an additional $200,000 on gel costs. This is due to heavier grades of sand needing a form of proppant transport, like gels, to prevent those grades form dropping out and causing blockage while the well is flowing (I believe).

For the record, PXD's earnings were strong. Its fourth-quarter revenues came in at $2.68 billion, and net income of $324 million was definitely respectable.

The company continues to repurchase shares at attractive prices here, it believes, and has also doubled its dividend. Both of these events have extremely bullish implications for PXD. After all, companies rarely spend precious capital on dividends and buybacks when they believe share prices and business activity levels have room to fall.

Its net debt is also manageable, which is now slightly under $1 billion, and cash and investments on hand stands at $1.4 billion, providing crucial financial flexibility for future operations.

Lower oil prices from a slowing economy, or inflation from a growing economy, are real risks to Pioneer's growth story. After all, the company claims that for every $5 gain in oil prices, revenues are expected to increase by $400 million.

This is why basis risk management is an important key to sustain margins. When Midland differentials can climb to as high as $15 from lack of takeaway capacity, obviously, margins will shrink substantially. So, to mitigate this risk, PXD ensures that 98% of its barrels get Brent-related pricing, as opposed to Midland pricing, which adds about $9 per barrel extra in margins, when all things are considered.

Pioneer continues to raise the bar in the E&P industry when it comes to increasing performance while cutting costs.

Efficiencies are being gained through debundling (which are saving over $1 million per well), new completion techniques with 100 mesh sand, pad drilling, and zipper fracs. Therefore, I continue to believe that PXD, like many other E&Ps, is now fully equipped to sustain its transition into manufacturing mode.

I also believe that PXD will be predominantly focused on bringing mega pads on-line next quarter that were drilled in previous quarters, and this, along with debundling and efficiencies gained in the field, is why CapEx can fall while production rises.

As a result, I continue to stay long E&Ps like PXD for their ingenuity and financial prudence, and will use further dips to add to shares.

Todd Akin
2K Followers
Graduated from the University of Houston- Downtown with a degree in Finance. My site, Wallstreetstocksolutions.com, focuses on portfolio management and unique investment opportunities.