Transocean (NYSE:RIG) recently published its quarterly earnings report and held a conference call. I assume that the majority of those reading these lines have already had time to look at the headline numbers and, since they are not a major catalyst in current circumstances, I want to jump straight to the most interesting things - the big picture and the key comments from the conference call. This time, it contained plenty of very useful information.

Transocean's strategy from a financial statements point of view

Those who have been reading my work and comments here on Seeking Alpha for some time surely know that I've been skeptical about Transocean's aggressive strategy amid ongoing offshore drilling market challenges. The acquisition of Ocean Rig looked especially reckless to me. In my opinion, Transocean's yearly numbers tell the story of balance sheet destruction.

As seen in the income statement, Transocean managed to revert the trend of lower revenues, something that other drillers struggled to do as better-era high-margin contracts were replaced by near-breakeven contracts or no contracts at all. However, this revenue increase came at a price as Transocean had to acquire Songa Offshore and then Ocean Rig. These acquisitions hit the company from several sides. First, the number of Transocean shares increased by roughly 28% from the end 2016 to the end of 2018:

At the same time, cash on the balance sheet took a hit while the debt load continued to grow: 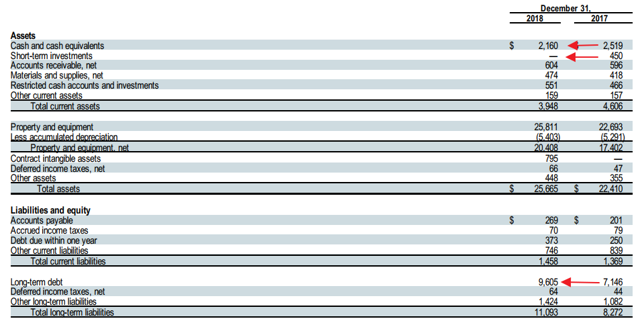 One might argue that the company was scooping up assets on the cheap during very bad times, and that the company was preparing for the rebound while taking the crown as the leader by backlog and number of floaters. However, such an argument is under significant pressure since Transocean significantly weakened its balance sheet and apparently overpaid for Ocean Rig. Let's go step by step, starting with the Ocean Rig purchase.

What will happen to Ocean Rig rigs?

As we have learned from the recent fleet status report, the company decided to scrap drillship Ocean Rig Paros, a decision that was hardly a surprise. However, the comments about the state of the rig are so astonishing that they are worth reading:

That rig had gone through some pretty tough times with an owner that had gone bankrupt and had not invested in the asset at all. There were no records of any maintenance or original equipment documents. It had been cannibalized for parts and it was in pretty bad shape.

As per Transocean's calculations presented during the earnings call, the rig's reactivation could have cost as much as $250 million. As it turned out, Ocean Rig Paros is not the only rig that Transocean decided to scrap. Semi-sub Eirik Raude also goes under the knife due to high reactivation costs (~$100 million).

The most interesting comment was about the potential reactivation costs of other Ocean Rig drillships. Transocean stated that it has not done the work to update the original guidance (it was $25 million, and the conference call transcript cites $35 million - both numbers look artificially low to me). The fact that the company has not done the homework on reactivation costs means that the rigs will not be reactivated anytime soon.

As per Transocean's original marketing materials published both in the presentations of Ocean Rig acquisition as well as form 424B3, the implied steel value of Ocean Rig's drillships (excluding Paros which was a dead horse right from the start) was $278 million.

As seen above, Bassoe currently values Transocean's stacked drillships at an average of $231 million per rig, or $924 million for the group. I'd argue that the whole value of these rigs is at risk as they will obviously spend more time in the stacked position while the market is not short of drillships. Their unstacking costs and the technical challenges associated with bringing modern drillships back to life after years of stacking are hard to predict, but I'd argue that the original Transocean guidance is way below the true cost of bringing a rig back.

Bassoe Offshore database shows that currently 56 modern (made after 2006) drillships are working, 29 are warm stacked, 20 are under construction and 10 are cold stacked, with Transocean holding the dubious leader crown for five cold stacked drillships (including Paros).

Other cold stacked rigs include Noble's (NE) Bully I (scrap candidate), Sertao (Paros sistership, sure scrap), Ensco's (ESV) DS-3 and DS-5 (likely to be cannibalized by Rowan's (RDC) modern working and warm stacked drillships) and Opus Tiger 1, a drillship suitable for drilling in depths up to 5,000 feet and not comparable with other rigs in this list. Put simply, the cold stacked list is a list of rigs with very dubious perspectives, and Transocean has not shown why Ocean Rig's drillships have real perspectives to return to the market and compete with warm stacked rigs and newbuilds.

Originally, I thought that Transocean would rush to reactivate Ocean Rig drillships because otherwise they'll be way behind the competition, see increased reactivation costs, and just slowly die. However, the company appears to be in no position to execute this strategy. Why? Let's now turn to the balance sheet situation.

Transocean finished the year 2018 with $2.2 billion of cash and $1 billion of available credit. This looks like a normal situation only at the first glance. The comments regarding future liquidity perspectives were eye-opening: "Including our $1.1 billion revolving credit facility which matures in June 2023, our end of year 2020 liquidity is estimated to be between $900 million and $1.1 billion." Put simply, if the company does not take more debt, it will run out of cash. Oops.

The reason for this major problem is the capital expenditures on newbuild drillships (2 Transocean's and 2 Ocean Rig's that have a favorable financing scheme), which led to a capex budget of $440 million for 2019 and $1.3 billion in 2020. Another problem is the necessity to finance the debt, leading to $620 million annual interest payments.

Transocean's prized backlog is just sufficient enough to carry the weight of the debt load at this point. For 2019, the company estimates revenues of $3 billion, operating costs of $1.8-$2 billion, G&A of $185 million-$195 million, and net interest expense of $620 million. There is little room for capex, let alone for building any cash for debt repayments.

Given the liquidity projections, the debt schedule looks difficult with huge amounts of debt to deal with in 2023-24: 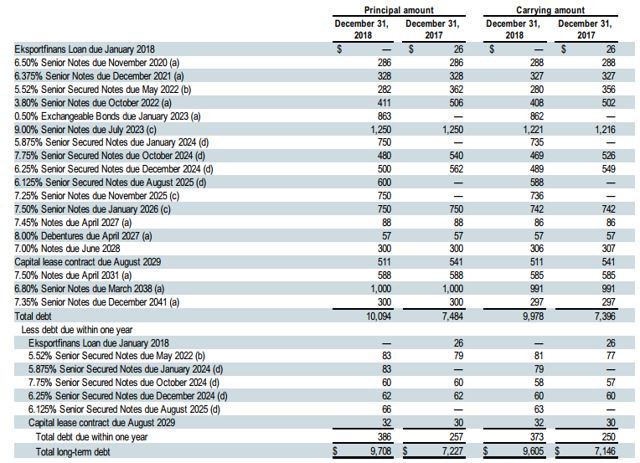 The company needs a significant improvement in the offshore drilling market and, therefore, the number of contracted rigs and dayrates to deal with the debt. Otherwise, it will face restructuring in 2023. This is probably the first time I've mentioned a possibility of restructuring (although I'm not calling it as of now) for Transocean, but the numbers are alarming.

I'd also say that the weakness of balance sheet puts pressure on Transocean's rig reactivations. Besides Ocean Rig drillships, the company also has Deepwater Champion, Discoverer Americas, Discoverer Luanda, and Discoverer Clear Leader that are under question. If the recovery is not as robust as Transocean believes it will be, the company could lose eight modern drillships that will fail to come back to the market from the stacked state due to insufficient demand, stronger competition and Transocean's weak finances.

Market commentary is upbeat as ever, but utilization projections contradict the ultra-bullish tone

Transocean was very bullish on ultra-deepwater perspectives which is not surprising to those who have followed the company for some time. However, I'd want to highlight one number from the earnings call. Here is Transocean's answer on working ultra-deepwater rigs projections at the end of 2019: "And if you factor in all the rigs that have rolled off contract this year and all the new opportunities that we think are available out there, we can see an exit rate for 2019 between 5% and 10% higher than where we exited 2018."

In my opinion, there is simply no way this level of demand increase will lead to major dayrate improvements that Transocean was talking about in the latest earnings call. There are just too many rigs on the sidelines. One can expect material dayrate improvements for the very top rigs, but not for the whole pack. 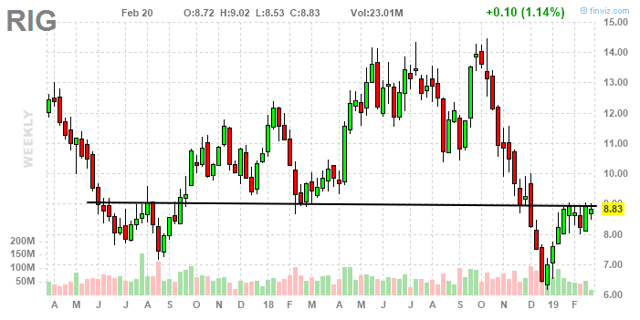 Transocean shares are now dealing with the major resistance at the $9.00 level. In case Brent (BNO) oil prices continue their journey to $70 per barrel, this bastion might fall, attracting momentum players as well as forcing shorts to cover. Such a situation will create a possibility for short-term upside play in Transocean shares.

However, the longer-term view is alarming, and those investors who are in Transocean for the multiyear term should start monitoring the situation seriously. Transocean bet the farm on ultra-deepwater; it diluted shareholders, spent cash, raised debt, and will raise even more debt. The company is now in a situation where it depends not only on whether offshore drilling will rebound, but also when it will rebound. I must admit that while I've long been skeptical of Transocean's strategy, I have become more long-term bearish on the company after seeing the numbers and Transocean's projections.

Vladimir Zernov
16.16K Followers
I'm a trader who trades both short-term and long-term. I started my career as a day-trader for a trading firm, but then turned to longer time frames and went on my own to manage my portfolio. I use technical analysis as well as fundamental analysis in my research.
Follow

Disclosure: I am/we are long DO. I wrote this article myself, and it expresses my own opinions. I am not receiving compensation for it (other than from Seeking Alpha). I have no business relationship with any company whose stock is mentioned in this article.