Calculating risk is the key to successful investing in the stock market. In a world of efficient markets, the riskiness of a stock should be inversely proportional to the expected reward possible. But we do not live in a world of efficient markets, and sometimes opportunities with asymmetric risk/reward ratios present themselves. Skyworks Solutions Inc. (NASDAQ:SWKS) is one of those opportunities. The stock is trading at a massive discount to historical prices. However, there's usually a reason why stocks would trade for cheap. The question is are you being compensated for that risk? And is there an asymmetrical reward?

Let’s get the main risk out of the way first. Despite its impressive portfolio of wireless semiconductors, the company’s largest customer remainsApple Inc. (AAPL). According to the company’s FY2018 10-K, Apple accounted for 47%, 39% and 40% of the Skyworks’ net revenue in 2018, 2017 and 2016, respectively. That shows huge concentration risk that's not going away and would indicate that basically any negative news regarding Apple or (Apple’s relationship with suppliers) would send the stock crashing. The two stocks have pretty much moved in tandem for the past two years, and recently Skyworks stock plunged before Apple effectively serving as a warning signal. The chart below shows the movement of the two stocks assuming a similar starting point during the last year and a half. 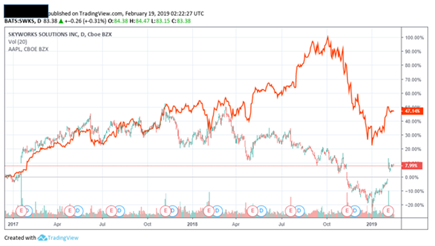 It's well documented as well that earlier this year Apple had to cut its revenue forecasts due to slow iPhone sales. As mentioned in the Verge:

“Apple just announced its financial results for the company’s Q1 2019 fiscal quarter, which includes the 2018 holiday shopping season. Apple reported revenue of $84.3 billion, a decline of 5 percent from one year ago, and quarterly earnings per share of $4.18. “Revenue from iPhone declined 15 percent from the prior year, while total revenue from all other products and services grew 19 percent.”

While Apple has been quick to blame the slowdown on the Chinese market (and the related geopolitics involved) there seems to exist an easier explanation. Market saturation. Everybody who wanted an iPhone already has one and there isn’t really a compelling enough reason to upgrade to a new device. However, the forecasted decline in smartphone (and by extension iPhone) sales is nothing more than a cyclical trend. iPhone sales are most likely no longer on a growth trajectory. However examining a longer-term horizon (five-ten years) for valuation purposes we can still conclude that there's no collapse in the iPhone market. Your smartphone is still an essential device and it may take longer for the average customer to replace their iPhone, but odds are when the time comes they will still go with Apple. In my financial model, I’ve assumed on average that Skyworks’ sales related to its mobile business would grow at 2% per annum (which is around the average US GDP growth rate) for the next five years.

There's some bad news though, as I expect that Apple’s weakening sales could affect Skyworks in other ways. Tim Cook may just pull something from the MBA bag of tricks to increasing net income (Apple already has done trick No. 1 which is increasing prices). The next trick could be squeezing supplier margins. Because of this, I’ve modeled out weakening gross margins for Skyworks from 51% declining to 47% for the next five years.

Management has acknowledged the company’s smartphone exposure and has wisely begun making waves in diversifying its business. As detailed in the Q1 2019 earnings call, momentum in the broad market business helped offset the general weakness of the mobile business.

The broad markets are other product offerings of Skyworks apart from mobile and consists of applications for wireless connectivity in infrastructure, smart energy, automotive and medical among others. The broad market accounted for 27% of revenues and has been growing double digits. Revenue was $972M for Q1 2019, not too far off from Q1 2018 record-breaking revenue of $1.05B. Margins also remained relatively unchanged with 51% gross margin and 37% operating margin respectively.

For longer-term investing, it's important to check company metrics. This is especially true in the case of Skyworks as the company faces near-term headwinds with regard to the slowing mobile phone market. Using the FY2018 10-K, I've calculated that the company had return on assets of 20.5%, gross margins of 50.4% and net margins of 23.7%. I’ve used the FY 2018 figures as this removes quarterly seasonality.

Beyond its healthy margins, what really surprised me about this company is the fact that it carries no debt on its balance sheet. This is important for two reasons. First having no debt gives the company room to make further strategic acquisitions or capital expenditures in the future to fund growth opportunities as they arise. Second, the company has room to return cash to investors. The company already is paying out a relatively healthy dividend (at current prices dividend yield is about 1.8%). The company also has initiated a $2B share buyback on Feb. 5, 2019, on the strength of its balance sheet. At current prices, I believe this share buyback would be value generating for shareholders. The company has combined cash and marketable securities of $1B on FY2018 and has generated cash flow from operations of $1.3B on FY 2018 making these payments to shareholders sustainable moving forward.

Potential kicker from 5G and Internet of things

Skyworks is uniquely positioned to take advantage of the upcoming 5G and IoT revolution. In simple terms, 5G is the next stage in global communications standards. 5G data rates are expected to approach 10 to 100 times the fastest 4G speeds of today with near-zero latency. Combining this with the fact that semiconductor devices continue becoming smaller, faster and more powerful, you can imagine that it's becoming easier to integrate these across multiple items, significantly increasing the company's total addressable market apart from mobile. This will enable a whole host of new applications, some obvious, such as autonomous vehicles, advanced robotics and smart cities, among other things, while others, still left to the imagination. 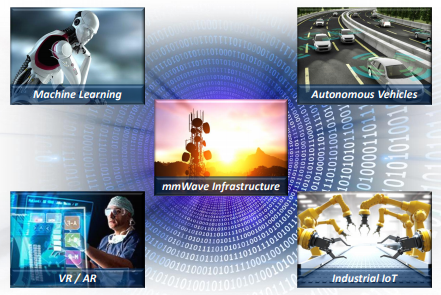 From an investment perspective, modeling rapid technological advance always is tricky. Do you model a 50% increase in revenue, why not a 75% increase in revenue? The fact of the matter is predicting the shape of technology five years from now is difficult at best and spotty at worst. Will 5G open the path to revolutionizing the world? Or are we dealing with the next Google Glass/Apple Watch/ Segway here?

What I would like to see from an investment perspective is if the company is well positioned to take advantage of this opportunity. For Skyworks, the answer is yes because of its strong cash flow, healthy margins and the strength of its balance sheet. 5G and IoT represent a “kicker” when it comes to upside potential for the company.

For the "steady-state" valuation, I'm assuming that 5G just ends up as a modest upgrade from 4G. This assumption means that the advances of 5G don't extend beyond the realm of mobile.

Without even talking about the possible revolutionary potential of 5G and the Internet of Things, at a “steady-state” the company is well valued even considering the risks. Given that FY2018 EPS was affected by the one-time tax expense of $200M and the share buyback program, FY2019 EPS is poised to beat last year's EPS on a GAAP basis. Most analysts are forecasting a non-GAAP EPS of 6.33 to 6.97.

I’ve been more conservative with my estimates as I don’t take into account non-GAAP adjustments. With the following conservative assumptions of a long-term revenue growth of 2-4%, slight gross margin squeeze from 51% to 47% and discount rate of 10% (which is higher than the CAPM implied discount of 8.5%), I have a price target of 98.5 with an upside potential of 18.1% on the last closing price of 83.4 using a discounted earnings approach. At current prices, valuations for the company are compelling and would make a fine addition to a diversified long-term portfolio.

Additional disclosures: Caveat emptor! (Buyer beware). Please do your own proper due diligence on any stock directly or indirectly mentioned in this article. You probably should seek advice from a broker or financial adviser before making any investment decisions. This article was written for fun and should be considered general information, and not relied on as a formal investment recommendation. The author may have a position on this stock or may initiate a position in this stock within the next few hours or so.

Value Kicker
3.15K Followers
Nine to 5 by day. Hobbyist stock trader by night. I got an MBA and a CFA ... so that should count for something. I only care about my own greedy interests and I love feeding trolls. Not your financial advisor. Information for entertainment purposes only. Diamond hands are forever.
Follow

Disclosure: I/we have no positions in any stocks mentioned, but may initiate a long position in SWKS over the next 72 hours. I wrote this article myself, and it expresses my own opinions. I am not receiving compensation for it (other than from Seeking Alpha). I have no business relationship with any company whose stock is mentioned in this article.