It seems like Elon Musk, CEO of Tesla (NASDAQ:TSLA), just cannot help himself when it comes to talking about self-driving cars. Musk made his latest bold claim about Tesla’s autonomous vehicle program during a Feb. 19 podcast hosted by ArkInvest. He now claims that Tesla will achieve full autonomous driving capability this year:

“I think we will be ‘feature-complete’ on full self-driving this year, meaning the car will be able to find you in a parking lot, pick you up, take you all the way to your destination without an intervention this year. I am certain of that. That is not a question mark.”

That's a bold claim, especially the final phrase. It certainly leaves little room for future equivocation. Yet, for all Musk’s confidence, this latest pledge fails to hold up under even a cursory review of the current state of self-driving technology, both at Tesla and elsewhere.

Musk has made numerous claims about self-driving over the years, none of which have come to fruition. A coast-to-coast autonomous drive, for example, was promised repeatedly, only to be quietly shelved. There appear to be no formal plans to resurrect the trip. 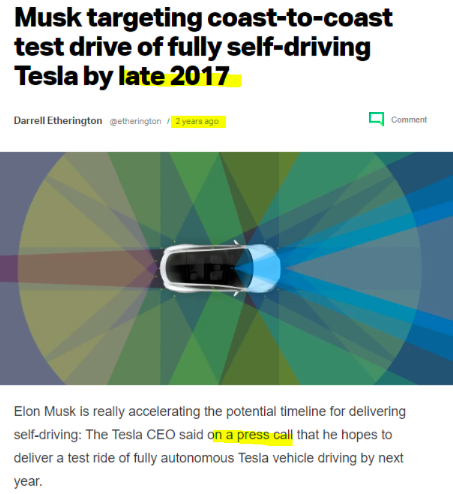 But perhaps the most infamous of Musk’s broken self-driving promise occurred in January 2017. In an exchange with Bloomberg’s Tom Randall on Twitter, Musk promised full self-driving capabilities within months:

Musk’s previous pronouncements on the subject of self-driving were largely met with a mix of uncritical media coverage and rueful disbelief from the auto industry and autonomous driving experts. This time around, the pushback has been far more fierce. Indeed, several respected voices within the auto news industry delivered stinging rebukes of Musk’s latest timeline. Karl Brauer, executive publisher at Cox Automotive, called Musk’s claim misleading:

"I think the term 'misled' works here. I mean, there are so many variables out there. There are so many different ways that a car has to be able to deal with driving: weather, lighting, traffic, pedestrians, bicyclists. To say you'll have all conditions solved in the next 12 to 18 months, nobody else is making that claim and there are some pretty big companies out there like Google who are doing this and have been doing this for a decade."

Mike Jackson, the outgoing CEO of AutoNation, was even more scathing in his criticism:

"I think he is overpromising on autonomous vehicles in an almost unethical way."

Jalopnik, a leading automotive news site, added some seering coverage of its own, casting a deeply skeptical eye toward Musk’s latest pledge while highlighting the litany of broken promises to date:

“Elon’s been saying a fully self-driving Tesla would be able to drive itself coast-to-coast as early as 2018. Keen observers of the collection of events we call ‘reality’ may recall that didn’t happen.”

Despite all these critical voices, numerous publications still parroted Musk’s claims without criticism. Even so, there are clearly signs of mounting industry and media pushback.

With a long track record of failing to deliver on its self-driving promises, Tesla hardly deserves the benefit of the doubt at this point. That's made all the more clear when one considers that pretty much all autonomous driving experts outside of Tesla consider the company to be well behind competitors such as Google’s (GOOG) (GOOGL) Waymo and General Motors’ (GM) Cruise. In fact, by many measures Tesla does not even rank among the top contenders. Navigant, for example, places Tesla in dead last in its autonomous driving rankings: 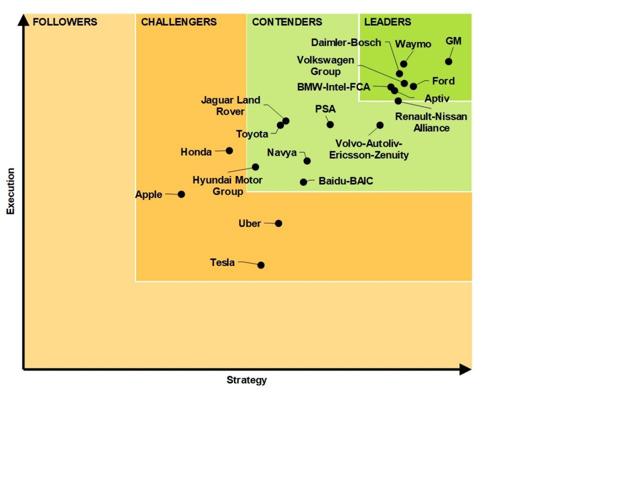 Here's the bottom line: Tesla is selling a technology that does not exist and is not likely to exist for several years. In November, Waymo’s CEO opined that autonomous vehicles would not likely be on the road for at least another decade.

Musk offers no technological advantage or justification for his radically accelerated timetable. His claims about using neural nets to leapfrog technologically have little basis in scientific reality.

While all this may seem to be an ancillary issue to Tesla’s core value proposition, that's far from the case. ArkInvest, for example, attributes the lion’s share of its $4,000 price target to the new earning opportunities that will emerge from Tesla’s autonomous vehicles in the near future. Many of the more sober price targets set by leading investment banks also attribute considerable value to Tesla’s autonomous program.

As the reality sets in that autonomous driving is still a long way off and that Tesla is nowhere near the lead in the race to begin with, it will put a considerable drag on the share price. Analysts already are revising their earnings estimates downward in light of less-than-stellar growth in sales and mounting competition in the EV space. Another broken autonomous vehicle promise will only feed into similar downgrades.

Investors betting on Tesla’s lead in self driving, or on its ability to monetize such capabilities, would be wise to revise their investment thesis before reality bites.