Energy Transfer LP (NYSE:NYSE:ET) owns just over 36% of the entire Bakken Pipeline, a crude oil takeaway system that runs from North Dakota over to Illinois and ultimately on down to the US Gulf Coast. As the operator of the consortium, it's really up to Energy Transfer LP to push forward with new growth endeavors and that's just what management intends on doing. This joint venture offers up a prime example of how Energy Transfer LP is able to target lucrative growth opportunities across its existing asset base and highlights how valuable pipe in the ground really is. Let's dig in.

For those of you that have read my past articles on Energy Transfer LP, you likely know that the small family fund I manage went long the name to take advantage of its 8.3% yield, its growth prospects, and the possibility its cash flow position will improve materially if management keeps a lid on growth-related capital expenditures going forward. Cash flow growth is largely a product of Energy Transfer LP turning new projects online, with some wiggle room concerning fee increases and higher utilization rates. Before going into Energy Transfer's plan to expand the capacity of the Bakken Pipeline, we first need to understand the size of the opportunity this midstream giant is seeking to capitalize on.

Below is a map of the Bakken Pipeline, which Energy Transfer owns along with Enbridge, Inc. (NYSE:ENB), MPLX LP (NYSE:MPLX), and Phillips 66 Partners LP (NYSE:PSXP). 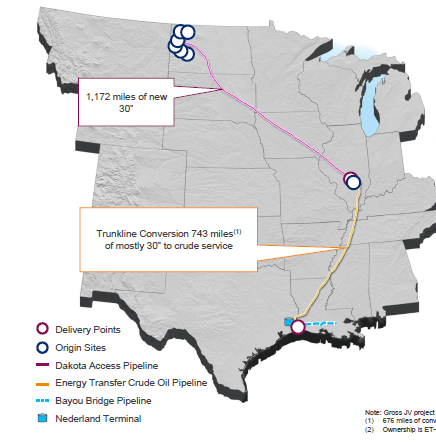 The Bakken Pipeline is really two pipelines linked together for the primary purpose of providing takeaway capacity for North Dakotan oil producers. Upstream players in the state are generally targeting the Bakken and upper Three-Forks formations, with the Middle Bakken horizon representing the core of the play. A combination of hydraulic fracturing and horizontal drilling (colloquially known as fracking) is used to unlock extensive oil-rich hydrocarbon resources in the region, as crude tends to represent 70-75% of what could be considered a standard Bakken well's estimated ultimate recovery. Unconventional production shifts towards gassier output over time, which is why new Bakken wells often sport an oil production mix closer to 80-85% at first, before moving steadily lower over the next five to ten years.

Data from North Dakota's Department of Mineral Resources indicates that the states' crude oil production climbed from less than 100,000 barrels per day in 2005 to over 1.4 million bpd by the end of last year. It's worth noting that Montana and South Dakota produce a modest amount of crude oil as well, which combined pumped out almost 70,000 bpd as of late-2018. There are also volumes that flow down from Canada to the Great Plains and Midwest regions in America to consider, as far as the opportunity those volumes provide long-haul oil pipeline operators in the region like Energy Transfer. 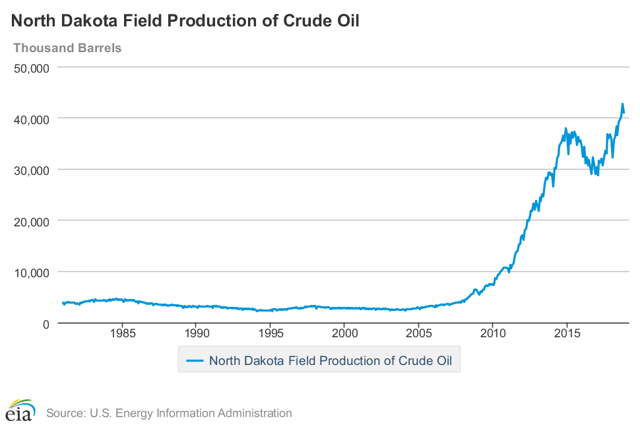 Pivoting to the Bakken Pipeline, the two-part system first runs from North Dakota over to Patoka, Illinois. This portion is called the Dakota Access Pipeline, a 1,200-mile long 30-inch diameter system that originates in the Bakken region (connected to six terminals across the play's three main counties) and delivers supplies to Patoka, a lesser-known oil hub. As a greenfield project, Energy Transfer (as the lead developer) faced a lot of political and activist-related pushback when building this system, but by June 2017, oil was flowing along the route. DAPL is the preferred abbreviation of this pipeline.

The second part of the Bakken Pipeline, the 700-mile long 30-inch diameter Energy Transfer Crude Oil Pipeline (abbreviated ETCOP, map here), was a much easier project. Energy Transfer converted an existing natural gas pipeline system to one that could transport crude oil, enabling significant volumes of crude to leave Patoka and travel towards Energy Transfer's Nederland oil terminal in Texas along the Gulf Coast. Some additional pipe had to be laid down as part of this endeavor, but not much.

Upstream companies utilizing Energy Transfer's Bakken Pipeline have access to refining centers in the Midwest through the Patoka connection (and the East Coast via crude-by-rail), refineries along the US Gulf Coast due to the Nederland connection, and overseas refineries via connections to marine terminals (after arriving at Nederland). Energy Transfer is offering North Dakotan oil producers one of, if not the, best takeaway options around and that is the economic moat that shields its operational performance (measured primarily by utilization rates). After a successful open season, Energy Transfer noted that it can now move 570,000 bpd through the system. Keep in mind that initially, the Bakken Pipeline had only 470,000 bpd of takeaway capacity.

In Energy Transfer's IR presentation dated January 15, 2019, management noted that on average 509,000 bpd of crude oil was transported through the Bakken Pipeline during the third quarter of last year (when peak capacity was around 525,000 bpd). As the Bakken Pipeline continues to ramp up over the coming months, expect this system to keep adding incremental cash flows to Energy Transfer's financial statements. Management mentioned that "during the fourth quarter, volumes on our Bakken Pipeline continued to average above 500,000 barrels per day," indicating the asset is still waiting for new contracts to come into force before reaching peak capacity.

During the company's Q4 2018 conference call, Tom Long (Group CFO of Energy Transfer Partners, which is now under the Energy Transfer umbrella) stated that (emphasis added):

"In January of 2019, we completed a successful open season on the Bakken pipeline to bring the current system capacity to 570,000 barrels per day. This capacity is available today with new shipper commitments from the recent open season becoming effective on or before March 1. Continued basin production growth and fourth quarter differentials drove nominations in excess of our available capacity during the fourth quarter. This demand as well as incredible demand [for] capacity during our recent open season further highlights the need for additional takeaway capacity out of the basin. As a result, we are looking at increasing system capacity to serve this growing demand, and we'll make that decision at appropriate time."

Even better, management expects Energy Transfer could boost the capacity of the Bakken Pipeline without having to extend the mainline or build additional laterals. Simply by upgrading existing pump stations along the system and/or adding new pump stations to the Bakken Pipeline, Energy Transfer sees itself being able to transport significantly more oil barrels out of North Dakota. Management stated that "we'll be able to provide, we believe, significant barrels just by adding horsepower" in regards to this proposed expansion.

If Energy Transfer, along with its partners, launches another successful open season the returns on such a project should be quite strong. Upgrading existing pump stations and/or building new ones is relatively straight-forward in the sense that these endeavors don't draw in the same level of legal, political, or regulatory scrutiny other domestic pipeline projects almost always do.

Rising oil volumes from North Dakota are the key opportunity such a development would target as far as the first leg of this pipeline system goes, but note that at the Patoka hub, an expanded ETCOP could also handle a serious amount of additional volumes from Canada as market conditions and contractual obligations dictate.

It wasn't easy getting the Bakken Pipeline up and running, but now that oil is flowing, there are a lot of additional growth opportunities for Energy Transfer LP and its partners to pursue. Energy Transfer LP's Kelcy Warren (CEO and Chairman) sees investments like these as the "commercial engine of this company" as they drive new business opportunities elsewhere.

As of its latest annual report, Energy Transfer LP had 28 million barrels of oil storage capacity at Nederland, which is supported by a major marine terminal nearby which possesses both import and export capabilities. While Energy Transfer LP does need to scale back elsewhere in terms of spending, this is very much a project worth pursuing. Readers interested in reading more about Energy Transfer LP should check out the giant $16 billion LNG development management is considering by clicking this link here. Thanks for reading.

Callum Turcan
4.76K Followers
Associate Director of Research, Co-Editor of Valuentum's Newsletters, Portfolio Manager-----Valuentum (val-u-n-tum) [val-yoo-en-tuh-m] Securities Inc. is an independent investment research publisher, offering premium equity reports, dividend reports, and ETF reports, as well as commentary across all sectors/companies, a Best Ideas Newsletter (spanning market caps, asset classes), a Dividend Growth Newsletter, modeling tools/products, and more. Independence and integrity remain our core, and we strive to be a champion of the investor. Valuentum is based in the Chicagoland area. Valuentum is not a money manager, broker, or financial advisor. Valuentum is a publisher of financial information.-----Please read our Disclaimer that applies to all articles published on Seeking Alpha: http://www.valuentum.com/categories/20110613.

Disclosure: I am/we are long ET. I wrote this article myself, and it expresses my own opinions. I am not receiving compensation for it (other than from Seeking Alpha). I have no business relationship with any company whose stock is mentioned in this article.