French consumer confidence bounced back in February, from 92 to 95 - the highest level seen since October. However, purchasing intentions are reacting slower than saving intentions and we expect consumer spending to pick up, even more, in March

After the 'yellow vest' protests began in France last October, consumer confidence plunged abruptly in November and went as low as 86 in January.

The degree of anxiety was high, with confidence in consumer's ability to save, down to their lowest levels since 2008. Three months later, with the number of 'yellow vests' protest fading, confidence is recovering.

The main index rebounded in February to its October level. At 95, it is still below the average of the three previous years (98), but it nevertheless indicates a rebound in consumer spending is likely in the first quarter. One thing that could also help is the declining rate of inflation which, on the back of lower oil prices, was only 1.3% in February and should be below 1% in the coming months, adding to the current push in purchasing power.

One shouldn't expect anything spectacular though. The February survey indicated that purchasing intentions are recovering less quickly than saving intentions, implying that consumers intend to remain cautious. Indeed, even though fears of unemployment were also back to their October level, consumers’ assessment of the economic outlook remained grim in February.

Purchasing intentions are rebounding, but less than other components

Is this the end of the 'yellow vest' effect ?

It doesn't mean however that the 'yellow vest' problem has been solved. The impact on growth will still be felt in 1Q19, weighing on growth for the whole year but for now, we keep our GDP forecast unchanged at 1.3% for the year.

The movement’s effects have been temporarily alleviated by the Government’s large public consultations on which President Macron will give a first report on the 6th of March. The movement can regain traction later in the year if reform proposals aren't bold enough. However, for the time being, it seems that tensions can be put under control until the European elections.

Consumer spending should push private consumption up in 1Q19 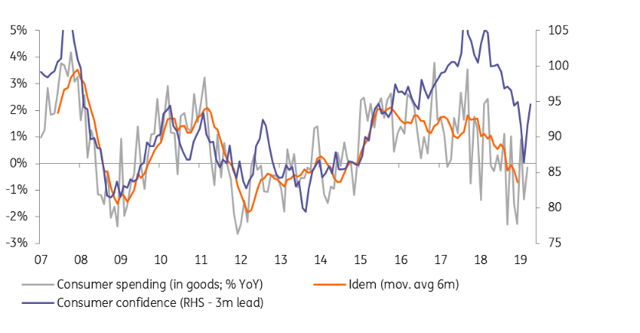 Content Disclaimer: This publication has been prepared by ING solely for information purposes irrespective of a particular user's means, financial situation or investment objectives. The information does not constitute investment recommendation, and nor is it investment, legal or tax advice or an offer or solicitation to purchase or sell any financial instrument. Read more