This article is part of a series that provides an ongoing analysis of the changes made to Alex Roepers’ 13F portfolio on a quarterly basis. It is based on Roepers’ regulatory 13F Form filed on 02/14/2019. Please visit our Tracking Alex Roepers’ Atlantic Investment Management Portfolio article for an idea on his investment philosophy and our last update for the fund’s moves during Q3 2018.

This quarter, Roepers’ 13F portfolio value decreased ~36% from $596M to $381M. The number of holdings increased from 20 to 22. The top three holdings are at ~60% while the top five are at ~80% of the 13F assets: Owens Illinois, Huntsman Corporation, CommScope Holding, Avent Inc. and DXC Technology.

Atlantic Investment Management’s annualized returns since the flagship fund’s inception in 1992 through 2017 was impressive at ~16%. Last two years, the fund has underperformed the S&P 500 Index. In a CNBC interview in May, Roepers mentioned that they are not interested in boardroom battles as they value staying liquid: ~20% of their historical returns can be traced back to active position-sizing around core stakes. To know more about activist investing, check out Deep Value: Why Activist Investors and Other Contrarians Battle for Control of Losing Corporations.

NCR Corporation (NCR): The minutely small 0.34% portfolio stake in NCR was established in Q4 2017 and disposed this quarter.

DXC Technology (DXC): DXC is a large (top five) ~11% of the portfolio stake established this quarter at prices between $50 and $94 and the stock currently trades at $67.27. For investors attempting to follow, DXC is a good option to consider for further research.

Note: In September, Roepers urged the company to sell its European businesses. They value that at between $3.2B and $3.8B. A sum-of-parts valuation would then yield a much higher figure than the current PPS.

Note: An all-stock merger with Clariant AG (OTCPK:CLZNY) was announced in May 2017, but the plans were dropped in October following activist pressure.

Note: In November 2017, a regulatory filing disclosed a letter sent to Diebold. It urged the then CEO to provide 2018 outlook and reaffirm 2020 target. The letter also suggested hiring a financial advisor to device strategic alternatives including buying back 20% of the outstanding shares without adding leverage (preferred converts).

ADT Corp. (ADT) and Crown Holdings (CCK): These very small stakes (less than ~0.65% of the portfolio each) saw substantial selling this quarter.

Timken Co. (TKR) and Lear Corp. (LEA): These very small (less than ~0.65% of the portfolio each) positions established last quarter were reduced this quarter.

Oshkosh Corp. (OSK): OSK was a minutely small ~0.65% portfolio stake as of last quarter. This quarter saw the position built up to a large ~8% stake at prices between $53 and $73. The stock currently trades above that range at $79.30.

American Axle & Manufacturing (AXL) and Navistar International (NAV): These minutely small stakes (less than ~0.50% of the portfolio each) were increased this quarter.

The spreadsheet below highlights changes to Roepers’ 13F stock holdings in Q4 2018: 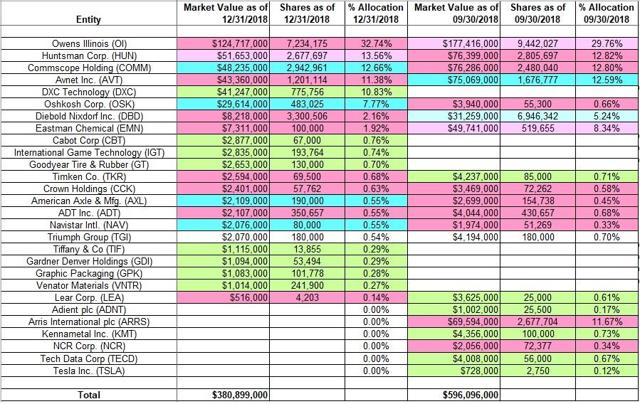 John Vincent
20.73K Followers
Previously a professional in the software industry and currently focused on absolute returns based on investment research and analysis.
Follow

Disclosure: I am/we are long DBD, OI. I wrote this article myself, and it expresses my own opinions. I am not receiving compensation for it (other than from Seeking Alpha). I have no business relationship with any company whose stock is mentioned in this article.