Well, could the Fed end up with a soft landing here? Interest rates have recovered somewhat. We are basically at the same place we were a month ago, but it seems that sentiment has turned toward asking the Fed for more wage growth rather than worrying so much about inflation and asset prices. And, the market seems to believe that the Fed is done hiking. Forward inflation expectations are moving back up too.

In terms of my measure of inversion, it hasn't budged, and when inversion has happened in the past, it has always been uninverted by lowering short-term rates, not by sitting tight while long-term rates rise. That doesn't mean it would be impossible. My hunch is that we are still more likely to see an eventual contraction, where the Fed will hold to the current rate target for too long as conditions deteriorate.

It still seems like the best position is to be somewhat defensive - that the next big asset class move will be higher bond prices.

But there does seem to be a change in the air. Can positive sentiment be strong enough to push savers into risk-taking and push long-term yields up while the Fed stays put? 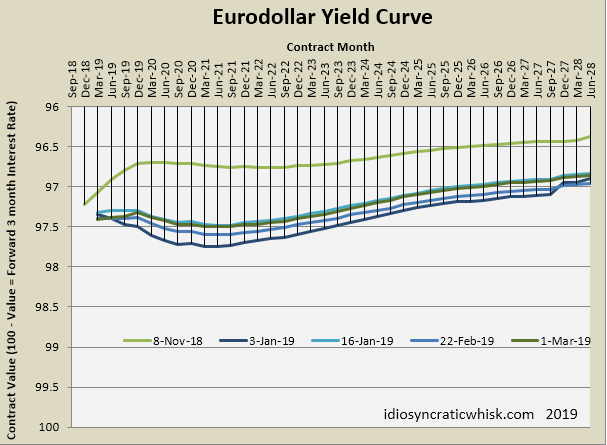 Kevin A. Erdmann
196 Followers
As a private investor, I have concentrated on deep value and turnaround microcaps, where illiquid trading markets and reputational risks allow mispricing to be occasionally extreme. Over the past few years, I have developed a radical new macro-level view of the economy. I have found that the housing bubble was not caused by reckless lending or over-investment in housing. Rather, it was caused by a shortage of housing in several important urban markets. The subsequent bust and financial crisis were not inevitable collapses of a demand bubble, but were avoidable and self-imposed consequences of a moral panic about building and borrowing. The key factors providing insights into financial markets going forward are related to the shortage of housing and the disastrous public policy responses to it. This has led to high rent inflation, perpetually tight monetary policy, a divergence of yields between US housing and bond markets, very low rates of new construction, and labor immobility/stagnation.Two books are in the works on the topic.  Here is the first:https://rowman.com/ISBN/9781538122143/Shut-Out-How-a-Housing-Shortage-Caused-the-Great-Recession-and-Crippled-Our-EconomyI am currently a Visiting Fellow at the Mercatus Center at George Mason University.
Follow
1 Comment
To ensure this doesn’t happen in the future, please enable Javascript and cookies in your browser.
Is this happening to you frequently? Please report it on our feedback forum.
If you have an ad-blocker enabled you may be blocked from proceeding. Please disable your ad-blocker and refresh.