Though the recreational cannabis industry may be viewed by different people from different perspectives, my view is that tomorrow’s industry leaders will be looked back on and have one thing in common: an emphasis on establishing and growing lifestyle brands. The premium that comes with robust name recognition, along with the growth prospects of experimenting in different verticals, makes the lifestyle focus logical. Time and again, one of the companies that most exemplifies this approach is Canopy Growth Corp. (NASDAQ:CGC). The latest such example of this can be seen by looking at the firm’s just-announced partnership with Sequential Brands Group (SQBG) and, more specifically, Martha Stewart. Using these iconic brands, Canopy will utilize the practical applications of hemp and other cannabis-related products to help to build up its own business, while Sequential may benefit in its own way.

A look at the deal

Specific terms of the arrangement between Canopy and Sequential have not been announced, but in its press release talking about the move, Canopy announced that they will collaborate with Sequential and Martha Stewart in an effort to create hemp-derived CBD products aimed at improving the lives of humans and animals alike. Leveraging the Martha Stewart brand name, which reaches 100 million consumers across all media and merchandizing platforms each month and whose products are in at least 70 million households, Canopy will aim to target a wide consumer base in order to grow sales faster than if the firm had to start everything from scratch.

While we don’t know which products will be among the first to come from this partnership, we do know that whatever is chosen will fit under the pets category. Even though this may seem odd given the nature of cannabis, cannabis-related products include, but are not limited to, pet food, pet clothing, and bedding. Outside of the pet-specific options I was able to research, I found that hemp seed oil can produce non-toxic diesel fuel, paint, detergents, inks, and more.

When compared to cotton, the benefits of hemp are clear. Just 1 acre of it is enough to account for the same amount of fiber as 2 to 3 acres of cotton, plus it is considered stronger and softer than cotton, and it does not mildew like cotton does. Applications on this front aside, there’s also the issue of accessibility. According to the aforementioned link, cotton only grows in moderate climates, while hemp can be grown in all 50 states, and every acre of it can produce the same amount of paper as 2 to 4 acres of trees.

For Sequential, which is well-known as an acquirer of quality brands, this plays in perfectly because the wide range of options that they and Canopy have to play with, with Canopy benefiting already as a provider of it, could be significant. All it will come down to is the quality of the branding and the quality of the products produced. With Martha Stewart behind the brand, both of these factors are looking positive for Canopy and its shareholders.

A win for a company that needs it

In this transaction, I see very little downside risk for Canopy and the company’s shareholders. Management already has its hands dipped in all sorts of opportunities, so its future revenue streams should be diversifying at the moment, but there’s also the fact that the firm will benefit not only off of retail and wholesale selling of goods that use its products, but from the sale of its hemp and other cannabis-related offerings that go into making their consumer products. 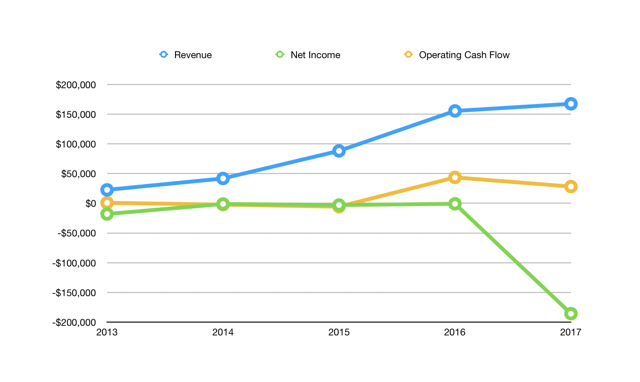 For Sequential, however, the stakes could be far higher. As you can see in the graph above, revenue for the company has been explosive in recent years, soaring from $22.65 million in 2013 to $167.46 million in 2017. In the first three quarters of 2018, revenue came out to $121.08 million, 0.4% higher than the $120.57 million seen for the same three quarters in 2017. Based solely on sales growth, you would think that Sequential has been a winner in recent years, but this thought couldn’t be further from the truth. 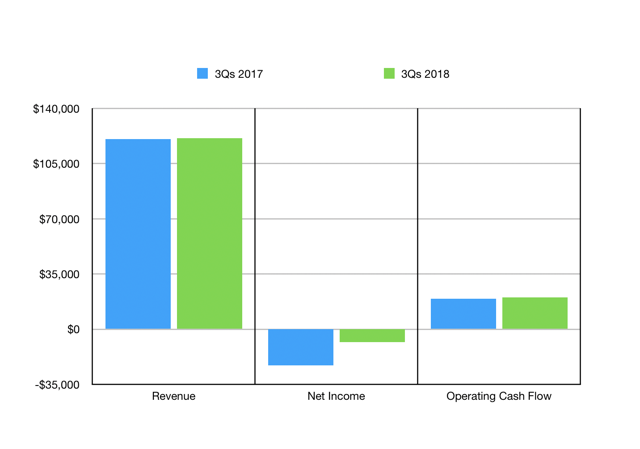 Most of these sales increases have come about because of M&A activity, such as Sequential’s effective merger with Martha Stewart Living Omnimedia back in 2015. Outside of sales, the picture has been rather bleak. As the aforementioned graph and the aforementioned chart both illustrate, net earnings for the business have been consistently in the red, while operating cash flow (though positive in the aggregate) has been on a bumpy ride.

Both Canopy and Sequential stand poised to benefit here, because although the cannabis market is still heavily regulated within the US to the point that it almost does not exist, the Farm Bill signed into law in 2018 made an inroad for industrial hemp. According to research firm New Frontier, the market for American CBD is expected to rise to $2.3 billion by 2022, with around half of that being hemp-derived product. This bodes well for Canopy’s already-planned facility in New York, where it will be spending between $100 million and $150 million in its preparation for making and eventually selling industrial hemp. Globally, though, as I have already shown, the entire cannabis market is likely between $150 billion and $250 billion, if not larger, so co-branding opportunities could be useful and profitable in any number of arrangements. This possibility is likely why, in response to this news, shares of Sequential actually rose 40% on the day this strategy was announced.

Right now, Canopy is doing a great job of trying to reach out in multiple directions. With the significant cash that’s currently sitting on its balance sheet, throwing darts at a board (not blindly, but in a well-thought-out manner), is perfectly logical. By partnering up with a lifestyle brand that has a long history and significant name recognition, the firm is making an excellent decision. For Sequential, meanwhile, a firm whose bottom line has been anything but impressive in recent years, this could be the start of a turnaround if the two entities can pile all into developing Canopy and its brands into widely-recognized, premium lifestyle brands.

78 Comments
To ensure this doesn’t happen in the future, please enable Javascript and cookies in your browser.
Is this happening to you frequently? Please report it on our feedback forum.
If you have an ad-blocker enabled you may be blocked from proceeding. Please disable your ad-blocker and refresh.