Midstream and MLPs finished the week negative overall, but rallied Friday on a negative day for oil prices to nearly salvage the week, which was encouraging in light of largely negative news across the sector this week. Oil prices finished the week down 2.6% overall, despite a strong inventory report that supported prices mid-week. The AMNA index outperformed the MLP Index and finished in line with utilities for the week, helped by strength in Canada (again). 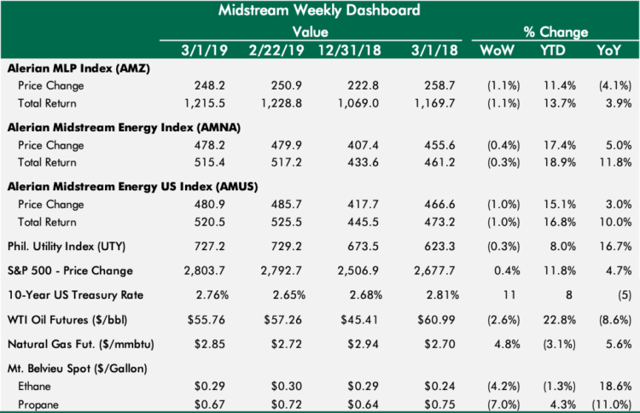 Midstream stocks held up well this week despite negative news flow and strong recent performance. This is bullish. It's almost as if the market is ready to give midstream stocks a pass. Or maybe there aren't any more midstream sellers left, beyond the hardcore base.

This final week of this earnings season reminded me of the premise of a horror movie that I've never actually seen: The Purge. The film's premise: for one full day each year, there are no laws, and people murder each other en masse with no fear of retribution or consequences, while the protagonists barricade themselves in houses hoping to avoid death.

Recapping the onslaught of news this week (read more in the news section below):

A lighter way to look at it, this earnings season was like the scene from Old School when Frank the Tank goes to marriage counseling, and is told: "This is a safe place, a place where we can feel free to share our feelings. Think of my office as a nest in a tree of trust and understanding. We can say anything here."

SMLP and ALTM investors were caught off guard by some of the things said in that trust tree, but overall the market is more focused on the improvements and reforms underway among the larger players.

The market took in all the above negatives and traded poorly, but by Friday with no more earnings announcements this quarter, midstream rallied. So, where do we go from here? Probably higher, if midstream traded this well through the Purge, what negative catalysts are left at the company level?

Looking ahead, the MLP Index has been negative in three of the last four years in March, including the last two in a row. If MLPs can finish March positive, they would post the best quarter since 2Q 2016 (+19.7%). In case you were wondering, the best quarter in the history of the MLP sector: 2013 at 19.74%. 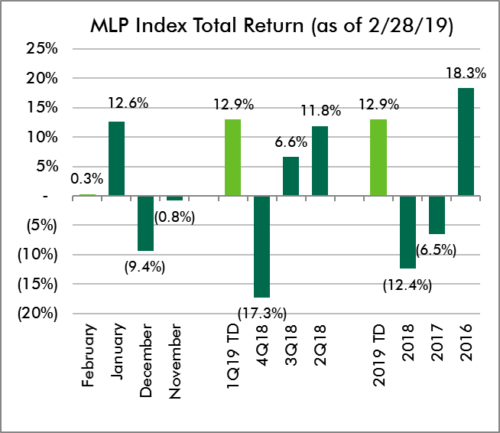 The AMNA Index, which includes Canada and is the most inclusive midstream index, has far outpaced the MLP Index this year so far. In February, AMNA added 100 bps to its YTD lead, and has now outperformed the MLP Index for five consecutive months. As of month-end, AMNA had produced just under 18% total return for the quarter, and it's even more after Friday. 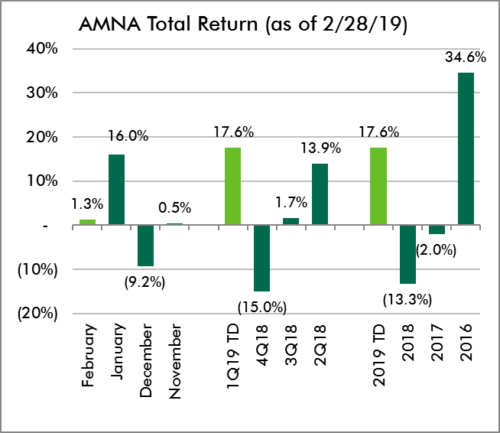 But the real action was in the bottom 5 where egregiously poor MLP governance was on display when SMLP announced plans to dilute LP investor to get rid of IDRs, even though they have virtually no value after the simultaneous distribution cut. In addition, EQM dropped like a rock most of the week as the market digested the news on Atlantic Coast Pipeline and translated its impact on EQM's Mountain Valley Pipeline. 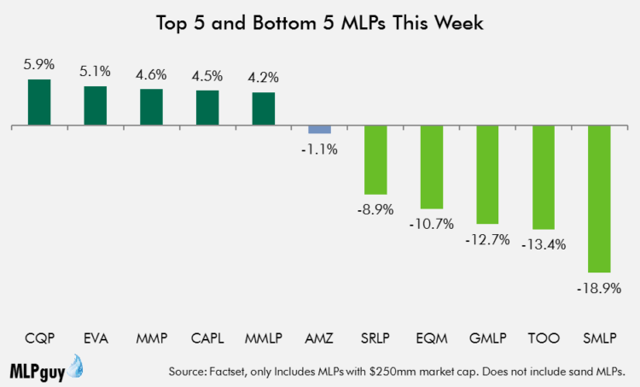 There was serious shuffling on the YTD leaderboard week over week, with SMLP tumbling out of the top 5 from the number two spot. HESM was a winner in the SMLP collapse, acquiring assets from it and climbing into the second spot behind NGL. Small-cap names MMLP, CAPL and USAC also joined the top 5, replacing the shipping names that fell off. EQM took over the bottom overall spot, more than 2,000 basis points off the AMZ return. 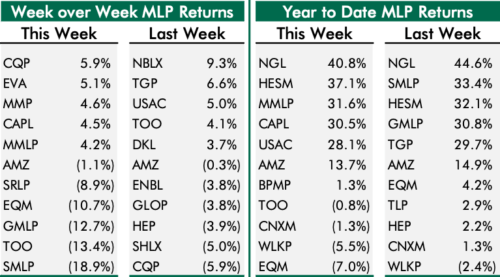 KMI's impressive start to 2019 continued, as it led the midstream corporation group for a second straight week. Chairman Rich Kinder continues to buy shares in the open market, which appears to be helping. WMB was a close second this week. Both KMI and WMB seem to be gaining traction as relatively stable stories with leverage trending in the right direction.

It's easy to look stable relative to some of the others in this group of late. This week, ALTM dropped 31.7% after a bigly negative change to guidance. ALTM was sold in 2018 as a midstream corporation with locked-in growth tied to a strong sponsor. It was also sold as a vehicle that midstream investors would "need" to own. We agree that midstream investors need more corporations to invest in to fill out the non-MLP bucket of midstream strategies. But corporate structure alone clearly isn't a panacea. Midstream corporations can have poor alignment and broken promises just like MLPs. 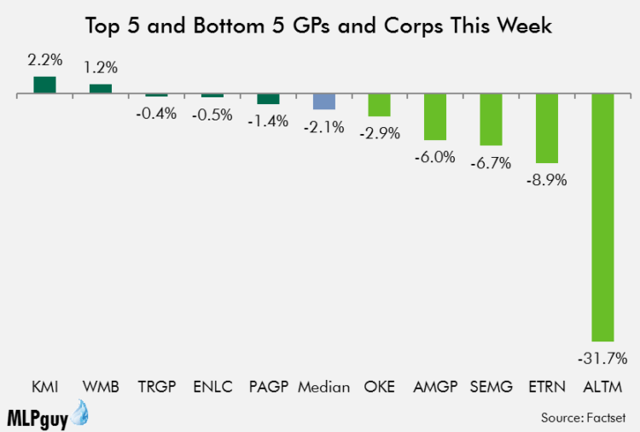 Lost in some of the carnage late was weaker results and uncertain capex outlook from OKE, which underperformed slightly on the week. As a result, OKE relinquished the YTD lead, leapfrogged by KMI and WMB. ENLC is hanging around as well, getting some support post-simplification. TGE was the only YTD negative name in this group last week, but has since been joined by ALTM and ETRN. 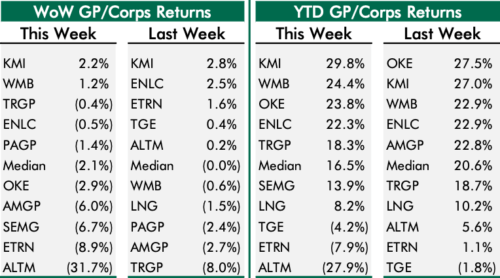 Canada beat the U.S. again this week with every single name positive. Within the group, we saw further into Keyera (OTCPK:KEYUF), Inter Pipeline (OTCPK:IPPLF) and Pembina (PBA). Late Friday's news of delayed permitting for Line 3 may take some of the air out of Canada midstream overall next week. 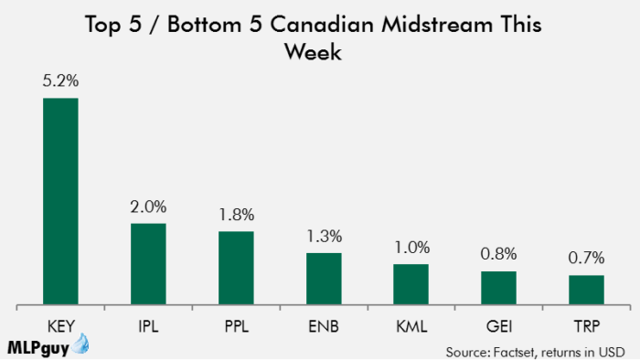 Keyera won the week by a wide margin again. TRP was the worst performer but still positive. YTD, Keyera is well ahead of the group now. TRP and Pembina are both up 25%+ too.

Plenty of news this week, but not much of it positive. The week started with fresh Atlantic Coast Pipeline uncertainty. There was an equity offering for a former MLP, and a midstream SPAC that priced on the week that the last one (ALTM) dropped 30%. SMLP announced a brutal trifecta of CEO resignation, expensive IDR elimination, and a distribution cut. ENB capped off the rough week with a 6-12 month delay for the only live oil pipeline egress project out of Canada. EPD's early in-service for the Shin Oak pipeline was positive.