Japan's economy was a huge success story during the second half of the 20th century, and today the country's wealthy, healthy, and aging population continue to reap the benefits of such hard work and prosperity.

However, in recent decades economic growth has been nonexistent, debt has accumulated, the population has begun to shrink due to low birth rates and low immigration, and so the central bank has turned to a variety of experimental tactics to try to revive the economy. In this sense, Japan is a step ahead and serves as the guinea pig that the rest of the developed world can watch and learn from.

This article provides several charts showing how truly remarkable some of these central bank actions are, and what they may tell us about the future of the United States and other developed nations.

In the late 1980s, Japan had an asset bubble with a scale that dwarfs just anything else. With cyclically-adjusted price-to-earnings CAPE ratios nearly 100 for Japan's stock market, it made the U.S. Dotcom Bubble in 2000 look cheap in comparison.

Additionally, Japan's GDP has been flat since the mid-90's with no growth, low inflation, and zero or near-zero interest rates.

Since 2013, the Bank of Japan began embarking on an aggressive money-printing plan to increase inflation and revive the economy. As a result, the size of their balance sheet has quintupled in a little over five years and is still growing:

The central bank is mainly buying Japanese government bonds. Since Japan has sovereign debt equal to over 200% of GDP (the highest in the world), they depend on zero or near-zero interest rates for the budget not to break.

So, the Japanese government is issuing a ton of bonds to fund its debt and deficit, and Japan's central bank is printing money to buy a lot of those bonds and hold them on its balance sheet. Additionally, the Bank of Japan is also buying equities, and is now a top-10 shareholder in 40% of Japanese companies.

Intuitively, this would seem unsustainable, like making something out of nothing. The practice of money creation may have a useful role to play in various economic scenarios to fix certain problems, but this has been very daring in terms of how far they've been willing to push it.

To put all of this in context, it helps to compare the size of a central bank's balance sheet to the size of its country's economy. 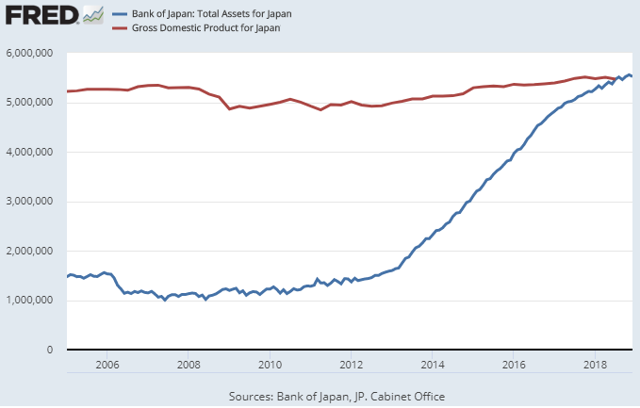 This stands out as exceptional even compared to other developed regions that have performed quantitative easing as well. 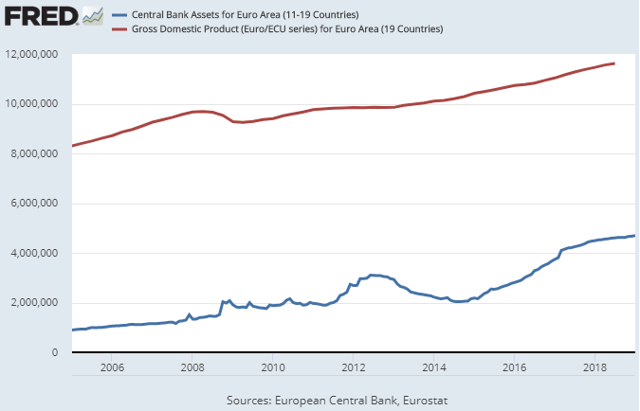 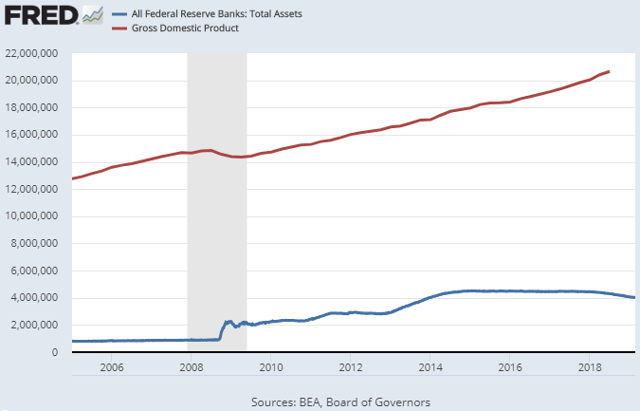 Despite all this money-printing, Japan has continually fallen short of its 2% annual inflation target. Likewise, we haven't seen official consumer price inflation in Europe or the United States from this type of policy either. Developed markets face major deflationary factors including aging populations, technological advancement, and for some of them, wealth concentration.

There has, however, been considerable asset price inflation in many of these markets.

The Addictive Nature of Low Interest Rates and QE

The Bank of Japan's balance sheet is huge and growing relative to the size of Japan's flat GDP, and is now larger than its GDP. It will be interesting to see how far this can go; can they reach 150% of GDP, 200% of GDP, or will something break along the way? How large of a share of Japanese bonds and companies can they hold?

The thing about having zero or near-zero interest rates as well as quantitative easing for a long time is that it's hard to reverse this policy even if policymakers want to.

Japan now has a massive government debt and anything other than near-zero rates on its bonds would likely break the fiscal budget.

Additionally, from what we see worldwide, there is a rise in "zombie companies", meaning companies that just make enough money to sustain their debt interest and nothing else. They're companies that would be dead if not for near-zero rates, and they steal productivity from the rest of the economy.

There has been a correlation between lower interest rates and a rise in the number of zombie companies and the length of time they remain zombies: 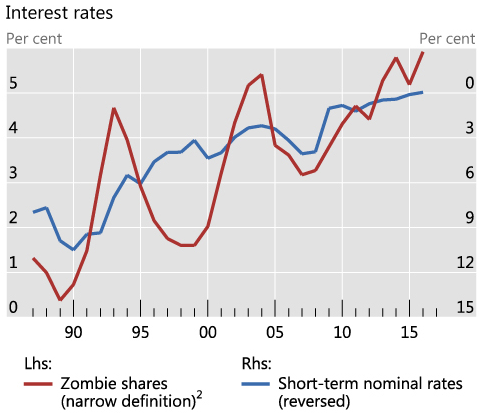 There are a lot of analogies that could apply here. For example, wildfires that rage through forests are necessary to clear dry overgrowth, kill invasive diseases and insects, and allow more sunlight to reach native plant species and develop fresh growth on the forest floor. Occasional fires are bad in the short-term but healthy for the forest over the long-term.

Similarly, as that BIS article states:

Previous studies have found that zombie companies may weaken economic performance (Caballero et al (2008), Adalet McGowan et al (2017)). Zombies are less productive and may crowd out growth of more productive firms by locking resources (so-called "congestion effects"). Specifically, they depress the prices of those firms' products, and raise their wages and their funding costs, by competing for resources. Our findings are consistent with this hypothesis. On average, labour productivity and total factor productivity of zombie firms are lower than those of their peers.

In summary, long-term low interest rates allow high levels of debt to build up, are hard to unwind, and can extract productivity/growth from an economy. The resulting economy ends up looking like a forest that never has wildfires, and thus never clears out diseases and invasive species to make room for healthier growth.

Furthermore, when debt reaches a high enough level and growth slows down due to demographic realities, positive real interest rates would break the fiscal budget and corporate budgets, meaning that it's hard to fathom how anything other than low interest rates and more money-printing can exist, which locks the economy into this state of affairs. But how high can it go, and for how long?

3 Lessons for the Future of the U.S. Stock Market

Japan is a lot different than the United States in several ways.

This means things could unfold differently for the United States. Our growing and younger population is a big plus for the U.S. economy going forward. On the other hand, our weaker middle class, structural trade deficit, and near-zero foreign-exchange reserves means the U.S. might run into problems from money-printing at a lower threshold than Japan has.

Still, it's worth observing a few lessons from Japan's monetary policy even if they may or may not apply perfectly to other markets.

Leading up to the global financial crisis, many popular bears called for a lot of doom and gloom in the U.S. economy. They were right for a couple years as the crisis unfolded, but then went on being wrong with terrible returns for a decade as the U.S. stock market and real estate hit record price levels year after year as the bears kept calling for more doom and gloom.

The principal mistake of those bears seems to have been underestimating how powerful central banks can be at affecting asset prices. If you think the Federal Reserve's balance sheet equaling nearly a quarter of our country's GDP is wild, just look at Japan where their central bank balance sheet is now larger than their entire GDP.

It's important to have an open mind and a diverse portfolio going forward. If the United States cuts interest rates and returns to quantitative easing (and I believe it will), that might or might not lead to consumer price inflation during the next business cycle. Quantitative easing is uncharted territory for the most part; it's hard to predict where the breaking points are.

Overconfidence in one's economic viewpoint or investment approach is an enemy of good returns in ever-changing markets. It's important in my opinion to take a step back now and then to ask oneself what risks there are to their investment thesis, and to view potential outcomes more as a probability distribution instead of expecting a specific result.

2) Inflation is elusive, but there are other downsides to QE.

Quantitative easing hasn't yet led to official consumer price inflation that some have feared in any major market that has tried it.

High asset price inflation can also indirectly lead to populism, which we see especially in Europe and the United States. When central banks inflate the values of financial assets, it directly benefits the top 10% or so like us that own most of the assets, and only marginally trickles down to everyone else. Homes are historically expensive relative to incomes, savings accounts produce nothing, and pensions are having a tough time producing good returns when real bond returns are nonexistent.

Additionally, economic research shows that low interest rates are correlated to the rise of zombie companies, which are evidenced to reduce productivity and growth in the broader economy.

3) Dividends deserve a place in a portfolio.

Yield-producing investments are ideal in a world of slow growth. Even if the stock indices don't go anywhere for a while like we saw for decades in Japan, appropriately-priced dividend stocks and other assets can still produce value.

Considering where the U.S. is in its current cycle, with high stock valuations, high corporate profit margins, high corporate debt, low official unemployment, we're most likely in a low-return environment for a while when looking out for 5 or 10 years, and attractively-priced low-debt dividend-yielding assets may do pretty well in that environment.

In addition, I like making my own yield by selling calls and puts on stocks and ETFs for a portion of my portfolio. This allows for substantial income generation in a variety of market conditions, and improves diversification away from the highest-yielding sectors.

Lyn Alden Schwartzer
43.75K Followers
Author of Stock Waves
High-probability investing where fundamentals and technicals align!
With a background that blends engineering and finance, I cover value investing with a global macro overlay. My focus is on long-term fundamental investing, primarily in equities but also in precious metals and other asset classes when appropriate.

Disclosure: I am/we are long ENB, KMI, NTR, JPM, FNV, IEMG. I wrote this article myself, and it expresses my own opinions. I am not receiving compensation for it (other than from Seeking Alpha). I have no business relationship with any company whose stock is mentioned in this article.