This article is part of a series that provides an ongoing analysis of the changes made to Mason Hawkins’ 13F portfolio on a quarterly basis. It is based on Hawkins’ regulatory 13F Form filed on 02/14/2019. Please visit our Tracking Mason Hawkins’ Southeastern Asset Management Portfolio series to get an idea of his investment philosophy and our previous update for the fund’s moves during Q3 2018.

Southeastern is best known for its investor-friendly attributes. The mutual funds in the Longleaf family are Longleaf Partners Fund (LLPFX) incepted in 1987, Longleaf Small-Cap Fund (LLSCX) incepted in 1989, Longleaf International Fund (LLINX) incepted in 1998, and the Longleaf Global Fund (LLGLX) incepted in 2012. The flagship Longleaf Partners Fund had a 15.51% return in 2017 and a dismal negative 18% return in 2018. Although the fund is focused on US mid-and-large cap businesses, the current allocation has three non-US companies in the top ten: CK Hutchison (OTCPK:CKHUY), LafargeHolcim Ltd. (OTCPK:HCMLF), and Fairfax Financial (OTCPK:FRFHF). Cash allocation is at ~2%, down from ~23% as of Q4 2017.

Note: Although their mutual funds are well-known among retail investors, it should be noted that the vast majority of Southeastern’s AUM ($14.1B total) is attributable to separately managed accounts.

Note: Southeastern’s ownership stake in PotlatchDeltic is 4.6% of the business.

CenturyLink: CTL is currently the largest 13F position at ~14% of the portfolio. It came about as a result of the acquisition of Level 3 Communications by CenturyLink that closed in October 2017. Southeastern had a huge 28M share stake in Level 3 for which they received ~40M CTL shares in the ratio 1:1.4286. The terms called for $26.50 per share in cash as well. The position was increased by ~75% in Q4 2017 at prices between $13.50 and $20.50. The stock is now at $12.15. There was a marginal increase in Q1 2018 and minor reductions in the last three quarters. For investors attempting to follow, CTL is a good option to consider for further research.

Note: Regulatory filings since the quarter ended show them owning 67.4M shares. This is compared to 64.4M shares in the 13F report. Their cost basis on the position is $16.17. Southeastern has a ~6.2% ownership stake in CenturyLink.

Note: The prices quoted above are adjusted for the coal spin-off last November. Southeastern has a ~24% ownership stake in CNX Resources.

Note: The prices quoted above are adjusted for the spin-off of Cable One (CABO) from Graham Holdings that closed on July 1, 2015. Shareholders of GHC received one share of CABO for each share of GHC held. Southeastern controls ~15% of Graham Holdings.

Note: Regulatory filings since the quarter ended show them owning 2.6M shares. This is compared to 3.3M shares in the 13F report. Their ownership stake is now at 4.4%.

Belmond Ltd. (BEL) and Solaris Oilfield Services (SOI): These two very small (less than ~1% of the portfolio each) stakes were reduced this quarter.

FedEx Corporation: FDX is a very long-term position that has been in the portfolio since 2000. Currently, it is a large (top-five) stake at ~6% of the portfolio. In recent activity, the five quarters through Q4 2017 saw a combined ~50% reduction at prices between $170 and $250. The stock currently trades at ~$181. There was a minor increase this quarter.

Mattel Inc. (MAT): MAT is now a large 5.68% portfolio stake. It was established in Q3 2017 at prices between $14.50 and $21.50, and increased by ~250% the following quarter at prices between $13 and $19. The stock currently trades at $14.88. For investors attempting to follow Southeastern, MAT is a good option to consider for further research. The last few quarters have seen minor increases.

Note: Southeastern has an ~11.5% ownership stake in Mattel Inc.

Baidu Inc. (BIDU), GCI Liberty (GLIBA), and Vipshop Holdings (VIPS): These small (less than ~2% of the portfolio each) stakes were increased this quarter.

Actuant Corporation (ATU), Alta Mesa Resources (AMR), and Eastman Kodak Co. (KODK): These are small (less than ~2% of the portfolio each) stakes kept steady this quarter.

The spreadsheet below highlights changes to Hawkins’ 13F stock holdings in Q4 2018: 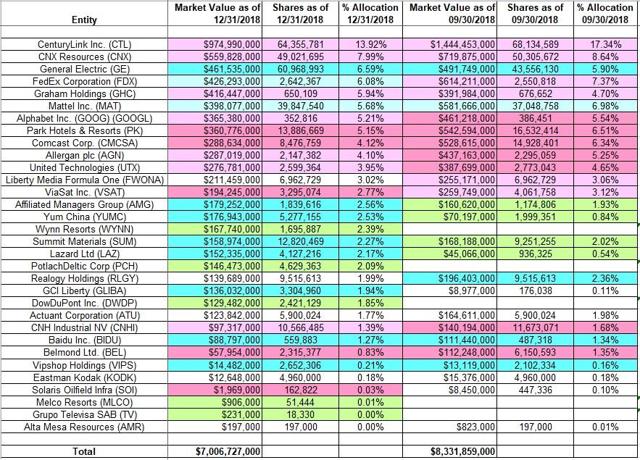 Disclosure: I am/we are long CKHUY, CNX, CTL, DWDP, GE, TV. I wrote this article myself, and it expresses my own opinions. I am not receiving compensation for it (other than from Seeking Alpha). I have no business relationship with any company whose stock is mentioned in this article.