The projected risk premium for the Global Market Index (GMI) ticked up in February to an annualized 4.6%, slightly above January's forecast. Today's revised estimate for GMI (an unmanaged market-value-weighted portfolio that holds all the major asset classes except cash) reflects the ex ante premium over the projected "risk-free" rate for the long run.

The forward estimates for GMI's performance remain far below the benchmark's historical return for the trailing 10-year period through last month. The benchmark earned a strong 8.8% annualized risk premium for the decade through February 2019 - well above GMI's current unadjusted 4.6% long-run forecast. 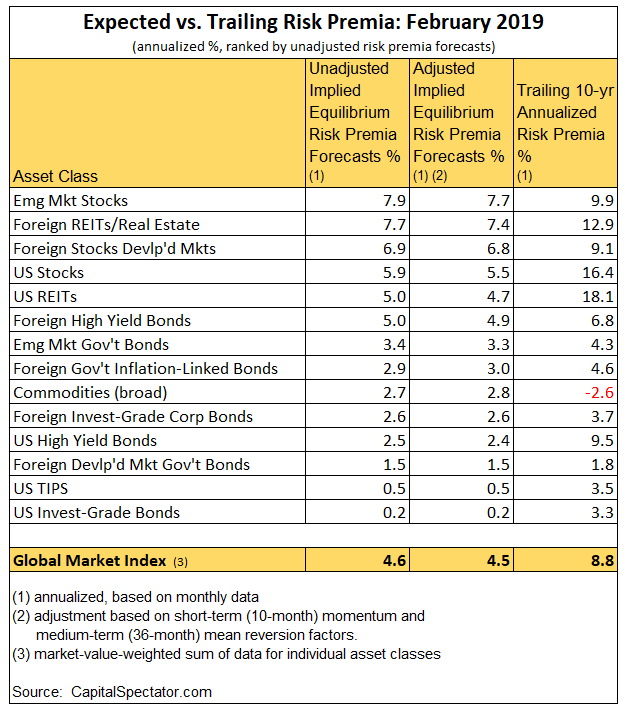 All forecasts are likely to be wrong to some degree, but the GMI projections are expected to be somewhat more reliable vs. the estimates for the individual asset classes. Predictions for the specific market components are subject to greater uncertainty compared with aggregating forecasts, a process that may cancel out some of the errors through time.

For historical perspective, consider the chart below, which compares the rolling 10-year annualized risk premia for GMI, US stocks (Russell 3000), and US Bonds (Bloomberg Aggregate Bond) through last month. Note that GMI's 10-year performance (red line) ticked up again last month to the strongest pace in the historical sample presented (since Jan. 2008). (Keep in mind that the trailing 10-year period for most asset classes is distorted at the moment because this time-period comparison uses an unusually weak period for a start date - February 2009. US equities and other markets bottomed in first quarter of 2009 - during the Great Recession. As a result, performance comparisons that start at or near Q1: 2009 will likely reflect inflated performances - performances that will likely fade to a degree as the early 2009 prices drop out of the analysis going forward.) 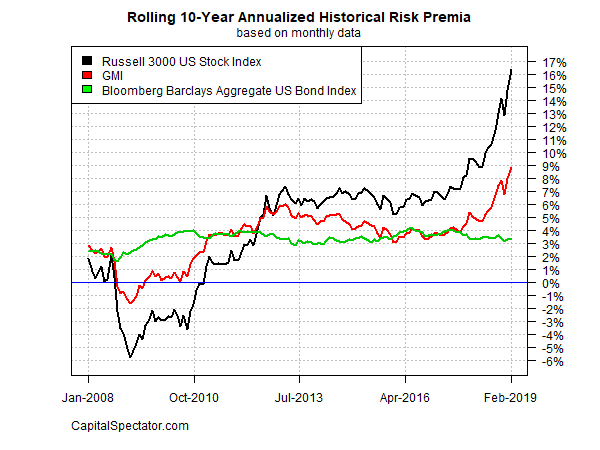 Let's turn to a summary of the methodology and rationale for the estimates above. The basic idea is to reverse engineer expected return, based on risk assumptions. Rather than trying to predict return directly, this approach relies on the moderately more reliable model of using risk metrics to estimate the performances of asset classes. The process is relatively robust in the sense that forecasting risk is slightly easier than projecting return. With the necessary data in hand, we can calculate the implied risk premia with the following inputs:

The estimates are drawn from the historical record since the close of 1997 and are presented as a first approximation for modeling the future. The projected premium for each asset class is calculated as the product of the three inputs above. GMI's ex ante risk premia is computed as the market-value-weighted sum of the individual projections for the asset classes.

The framework for estimating equilibrium returns was initially outlined in a 1974 paper by Professor Bill Sharpe. For a more practical-minded summary, see Gary Brinson's explanation of the process in Chap. 3 of The Portable MBA in Investment. I also review the model in my book Dynamic Asset Allocation. Here's how Robert Litterman explains the concept of equilibrium risk premium estimates in Modern Investment Management: An Equilibrium Approach:

We need not assume that markets are always in equilibrium to find an equilibrium approach useful. Rather, we view the world as a complex, highly random system in which there is a constant barrage of new data and shocks to existing valuations that as often as not knock the system away from equilibrium. However, although we anticipate that these shocks constantly create deviations from equilibrium in financial markets, and we recognize that frictions prevent those deviations from disappearing immediately, we also assume that these deviations represent opportunities. Wise investors attempting to take advantage of these opportunities take actions that create the forces which continuously push the system back toward equilibrium. Thus, we view the financial markets as having a center of gravity that is defined by the equilibrium between supply and demand. Understanding the nature of that equilibrium helps us to understand financial markets as they constantly are shocked around and then pushed back toward that equilibrium.

What can you do with the forecasts in the table above? You might start by considering if the expected risk premia are satisfactory… or not. If the estimates fall short of your required return, you might consider how to engineer a higher rate of performance by way of customizing asset allocation and rebalancing rules. Keep in mind that GMI's raw implied risk premia are based on an unmanaged market-value weighted mix of the major asset classes. In theory, that's the optimal asset allocation for the average investor with an infinite time horizon. Unless you're a foundation or pension fund, this time-horizon assumption is impractical and so there's a reasonable case for a) modifying Mr. Market's asset allocation to suit your particular needs and risk budget, and b) adding a rebalancing component to your investment strategy.

You might also estimate risk premia with alternative methodologies for additional insight about the near-term future (an excellent resource on this subject: Antti Ilmanen's Expected Returns). For instance, let's say that you have confidence in the dividend-discount model (DDM) for predicting equity market performance over the next 3 to 5 years. After crunching the numbers, you find that DDM tells you that the stock market's expected performance will differ by a considerable degree vs. the equilibrium-based estimate for the long run. In that case, you have some tactical information to consider.

Keep in mind, too, that combining forecasts via several models may provide a more reliable set of predictions vs. estimates from any one model. Indeed, a number of studies published through the years document that combined forecasts tend to be more robust vs. single-model projections.

What you can't do is get blood out of a stone. No one really knows what risk premia will be in the months and years ahead, which is why relying on forecasting alone (particularly for the short-term future) is asking for trouble. In other words, you should deviate from Mr. Market's asset allocation carefully, thoughtfully, and for reasons other than assuming that you're smarter than everyone else (i.e., the market).

James Picerno
5.7K Followers
James Picerno is a financial journalist who has been writing about finance and investment theory for more than twenty years. He writes for trade magazines read by financial professionals and financial advisers. Over the years, he’s written for the Wall Street Journal, Barron’s, Bloomberg Markets, Mutual Funds, Modern Maturity, Investment Advisor, Reuters, and his popular finance blog, The CapitalSpectator. Visit: The Capital Spectator (www.capitalspectator.com)