Exxon Mobil (NYSE:XOM) has raised its dividend for 36 consecutive years and thus belongs to the group of Dividend Aristocrats. The oil giant has significantly underperformed the broad market and its peers for years but it recently shifted its strategy. Exxon is embracing an aggressive production growth strategy, which could be a game changer for the stock. Moreover, Exxon is expected to announce its next dividend hike in April.

After the dividend raise, Exxon shares could be offering an almost all-time high dividend yield. With improving growth prospects, investors should note the potential returns and strong dividends for this oil giant.

Exxon is an energy giant, with a market capitalization of $339 B. It operates in three segments: Upstream, downstream (mostly refining) and chemicals. In 2018, the company generated 60% of its earnings from its upstream segment, 26% from its downstream segment and 14% from chemicals.

Exxon has significantly underperformed its peers in recent years. For instance, in the last two years, the stock has lost 2% whereas Chevron (CVX) and BP (BP) have advanced 10% and 24%, respectively. The main reason behind the underperformance is the inability of Exxon to grow its output for a whole decade.

All the oil majors failed to grow their output for years but they all returned to growth mode in 2017 and are poised to continue growing their output for years. Chevron grew its output by 6% last year and expects to keep growing by 2% per year until at least 2022. BP grew its production by 10% last year and expects to grow it by 5% per year over the next four years. Exxon has dramatically underperformed its peers in this aspect. Its production fell from 4.2 M barrels per day in 2012 to 4.0 M barrels per day in 2014 and has hovered around that level since then.

Fortunately, Exxon posted strong results in its latest earnings release. In the fourth quarter, its adjusted earnings jumped 72% over prior year’s quarter thanks to higher natural gas prices and deep discounts in some types of crude oil, which led the downstream segment to almost double its earnings. The most important aspect of the report was the 6.1% increase in the production level, from 3.78 M barrels per day in the third quarter of 2018 to 4.01 M barrels per day in the fourth quarter. It was the first time that the output exceeded the 4.0 M threshold since early 2017.

As mentioned above, the main problem of Exxon has been its inability to grow its production volume for a whole decade. However, a year ago, the oil major announced a major shift in its business strategy and thus it will now pursue growth much more aggressively. The company boosted its capital expenses from $15 B in 2017 to $26 B in 2018 and will raise them even further, to about $30 B per year, until 2025. This is a game changer for the oil major.

The strategic shift has already begun to reveal its promising prospects, as the company has made a series of impressive discoveries of new reserves in Guyana. The proved reserves of Exxon in the area have increased from 3.2 B barrels in early 2018 to more than 5.0 B barrels now while management expects the production rate in this region to reach 0.75 M barrels per day by 2025. This is almost 20% of the total current output of the company. 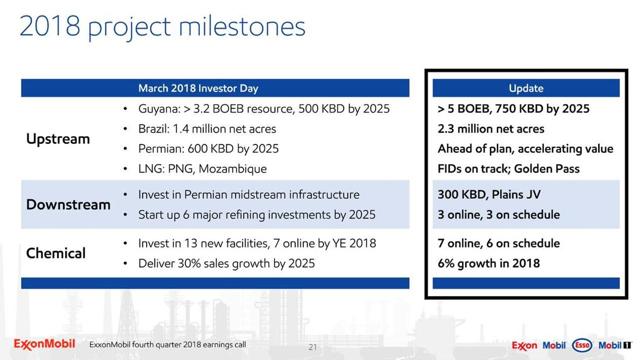 Moreover, management expects the tight oil production in the Permian Basin to increase 5-fold and thus reach 0.6 M barrels per day until 2025 (15% of the total current output). Overall, the oil giant estimates 25 major start-ups over the next six years. These start-ups will add approximately 1.0 M barrels per day of production while the ramp-up of recently launched projects will essentially offset the natural decline of the existing oil fields. As a result, management expects the total production to increase from the current level of 4.0 M to 5.0 M barrels per day by 2025.

The exciting growth prospects of Exxon are also evident from the significant increase in its reserves. Thanks to multiple discoveries offshore Guyana and the sustained growth in the Permian Basin, the oil giant has greatly enhanced its portfolio of high-quality, low-cost assets. In 2018, the company added 4.5 B barrels of proved oil and gas reserves. During the last decade, Exxon has added approximately 17.0 B barrels of proved reserves and thus it has achieved a reserve replacement ratio of 108%.

Given all the above facts, it is evident that the upstream segment of Exxon has strong growth potential ahead. In addition, management expects six major investments in the refineries to be completed by 2025. These projects will cost about $9.0 B but will have a greater than 20% annual return on investment. Management also expects the chemical segment to grow its sales by 30% from 2017 to 2025. This segment already grew its sales by 8% last year. 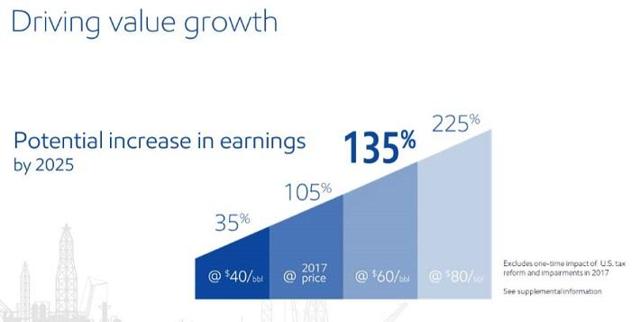 That will be an impressive achievement, as Exxon will exceed the earnings per share it posted in 2013 and 2014 ($7.37 and $7.60, respectively), when oil was trading around $100. The company will achieve these strong results thanks to the impressive improvement in the quality of its assets, which have a much lower production cost than the past portfolio of the oil major.

If the price of oil averages $80 by 2025, the earnings will more than triple, to $11.67 per share. It is thus evident that Exxon has exciting growth prospects ahead thanks to its aggressive investments in the discoveries of new reserves, as well as its disciplined investments in its downstream and chemicals segments.

Exxon is more integrated than Chevron and BP and hence it is much more resilient to downturns. In addition, Exxon produces crude oil and natural gas at approximately equal proportions whereas Chevron prices 75% of its production based on the oil price. Moreover, Exxon has a much stronger balance sheet than BP. The former has lower net debt than the latter ($126.7 B vs. $155.2 B) while it has 142% higher earnings ($20.8 B vs. $8.6 B).

The superior resilience of Exxon was confirmed once again in the fierce downturn of the energy sector, which was caused by the collapse of the oil price from 2014 to 2016. Exxon saw its earnings per share fall 75% whereas Chevron and BP saw their earnings completely evaporate, as they both posted losses in 2016.

The business performance was reflected in the stock prices. The stock price of Exxon fell 20% during that downturn whereas Chevron and BP plunged 33% and 42%, respectively. Some investors claim that the stock price volatility is meaningless, as stocks with solid fundamentals recover when the market sentiment improves. However, this is much easier said than done. During sell-offs, panic prevails and leads most investors to sell their stocks at the worst time in order to stop the bleeding process of their portfolio, which they cannot tolerate.

This behavior is devastating for long-term returns but most investors do not have the courage to retain their stocks when they incur a steep decline. Therefore, the low stock price volatility of Exxon is paramount for most investors, as it makes it very easy for them to maintain their shares even during market sell-offs.

Exxon is a Dividend Aristocrat that has raised its dividend for 36 consecutive years. Given the high cyclicality of the energy sector, which results from the dramatic swings of the oil price, the achievement of Exxon is admirable. Exxon and Chevron are the only energy stocks that belong to the group of dividend aristocrats. The achievement of Exxon is a testament to the strength of its business model and its long-term perspective in its business strategy.

Exxon has raised its dividend at an average annual growth rate of 7.7% over the last decade. Dividend growth decelerated to approximately 3% per year in 2016 and 2017 due to the downturn of the energy sector. However, the oil major raised its dividend by 6.5% last year and is likely to raise it at a similar pace this year thanks to its bright growth prospects and the improving shape of the energy sector.

We thus expect Exxon to raise its quarterly dividend from $0.82 to at least $0.87 next month. At the current stock price, the new dividend would result in a 4.4% dividend yield. As shown in the chart below, this would be close to an all-time high dividend yield for the stock. 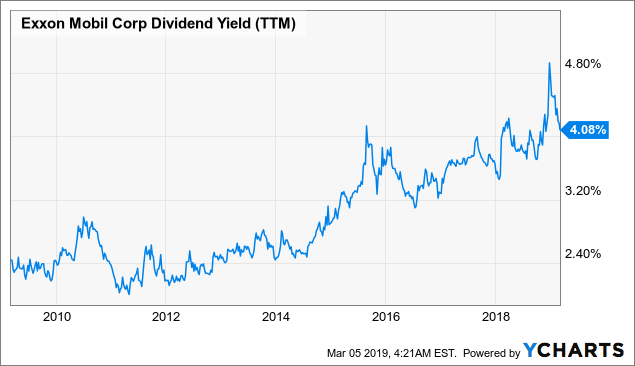 Moreover, Exxon has a healthy payout ratio of 66% while it has one of the strongest balance sheets in the energy space. Given also its promising growth prospects, the company will easily continue raising its dividend for several years. Even in the recent downturn, in which BP and Royal Dutch Shell (RDS.B) froze their dividends for more than three years, Exxon continued to raise its dividend. Therefore, those who purchase Exxon at its current stock price will lock in a nearly all-time high dividend yield and will rest assured that the dividend will continue growing at a meaningful pace for years.

As mentioned above, Exxon expects to achieve earnings per share around $8.44 by 2025, assuming an oil price around $60 in that year. Given the fast-growing demand for oil, which has surpassed 100 M barrels per day for the first time in history this year, we expect the oil price to be above $60 by 2025. Nevertheless, in order to be conservative in the calculation of the expected return, we will assume an oil price of $60 in 2025.

If Exxon trades around its fair valuation level in that year, the stock price will be approximately $110 (=13*8.44). This implies an approximate 37% stock price appreciation from the current level of $80 or 5.4% per year. As the stock is also offering a 4.4% dividend yield and the dividend will continue rising in the upcoming years, the stock is likely to offer an approximate average annual return of 10% over the next six years.

As the ongoing bull market has lasted for a whole decade and has thus become the longest in history, some investors have got used to double-digit returns and thus they may find the above expected return of Exxon lackluster. However, it is critical to note the aforementioned defensive nature of this company, which exhibits resilient performance during downturns and thus outperforms the broad market by a wide margin during rough economic periods.

Thanks to the defensive nature of Exxon, its expected 10% annual return in the upcoming years is very attractive.

Exxon has exhibited weak fundamentals for several years, and thus its stock has underperformed the market and its peers for a prolonged period. Consequently, most investors have been disappointed by the oil major and look elsewhere in order to gain exposure to the energy sector. However, the oil giant has eventually decided to do its best to return to growth mode. Its strategic shift has already revealed very promising signs, which bode well for the production growth in the upcoming years.

Thanks to this expected production growth and its attractive and growing dividend, Exxon is ideally positioned to highly reward its shareholders over the next several years. Given also its superior performance during downturns, the stock offers one of the highest risk-adjusted returns in the energy sector.

72 Comments
To ensure this doesn’t happen in the future, please enable Javascript and cookies in your browser.
Is this happening to you frequently? Please report it on our feedback forum.
If you have an ad-blocker enabled you may be blocked from proceeding. Please disable your ad-blocker and refresh.