Good chart from Gary Morrow at "This Week on Wall Street". 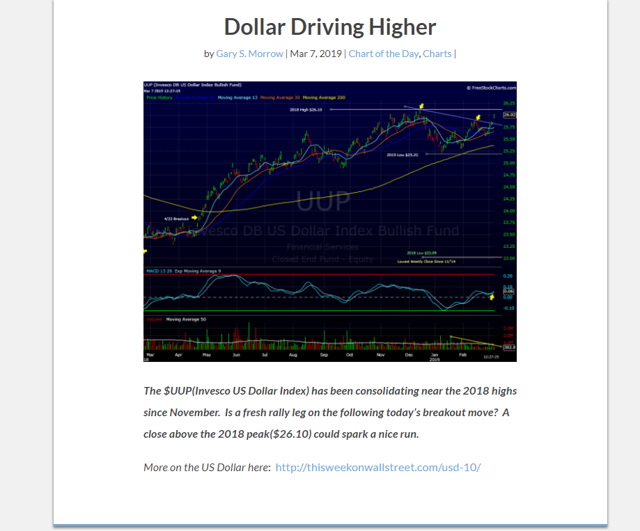 On Invesco's website, it's noted that the top three foreign currency forwards for the UUP are:

So, as the euro/dollar goes, so goes the UUP.

The US dollar is in one of its longest stretches of bull runs per Bloomberg, which noted yesterday that the greenback is experiencing its 3rd longest bullish run in history. The Emerging Markets trade became popular early in 2018, so maybe this will take the bullish enthusiasm off the trade, but I still like EMs and the EM trade over the next few years.

China's recent tax cuts and their dealing with some of their trade policies will help too. China is still the 2nd largest EM and thus could counteract the strong dollar influence.

Clients' emerging markets weighting was lifted in Q4 '18 as the iShares MSCI Emerging Markets ETF (EEM) and Vanguard FTSE Emerging Markets ETF (VWO) started to outperform the S&P 500 at the end of October '18, although both EM ETFs have now underperformed in 2019. The three vehicles being used to play the trade are the EEM, VWO, and the Oakmark International Fund (OAKIX). David Herro is an excellent manager, although he had a tough 2018, but you have to buy his fund and the asset class when its out of favor.

Client allocations are roughly 5-10% EEM/VWO, and then OAKIX is used to get the weighting to the 10-15% range.

The US dollar has been in a trading range for a few years. The UUP is still below its late 2016 high, although both the Dollar index and the UUP are close to all-time highs.

Being patient for now. The race to the bottom for the completely spineless ECB drove dollar strength today.

I would not like to see the DXY or Dollar index make an all-time-high.

Brian Gilmartin, CFA
8.95K Followers
Brian Gilmartin, is a portfolio manager at Trinity Asset Management, a firm he founded in May, 1995, catering to individual investors and institutions that werent getting the attention and service deserved, from larger firms. Brian started in the business as a fixed-income / credit analyst, with a Chicago broker-dealer, and then worked at Stein Roe & Farnham in Chicago, from 1992 - 1995, before striking out on his own and managing equity and balanced accounts for clients. Brian has a BSBA (Finance) from Xavier University, Cincinnati, Ohio, (1982) and an MBA (Finance) from Loyola University, Chicago, January, 1985. The CFA was awarded in 1994. Brian has been fortunate enough to write for the TheStreet.com from 2000 to 2012, and then the WallStreet AllStars from August 2011, to Spring, 2012. Brian also wrote for Minyanville.com, and has been quoted in numerous publications including the Wall Street Journal.
Follow
3 Comments
To ensure this doesn’t happen in the future, please enable Javascript and cookies in your browser.
Is this happening to you frequently? Please report it on our feedback forum.
If you have an ad-blocker enabled you may be blocked from proceeding. Please disable your ad-blocker and refresh.