China's short-term rates are near the last easing cycles lows and it's failed to spark an economic recovery. Yet stocks are up 20% over the last month alone.

And long-term rates are too high (from government bond issuance and record defaults). This indicates a steep yield curve although the economy is slowing.

Meanwhile - Chinese economic growth continues decelerating. This is the same situation the Fed was in back in 2009. Which led them to QE.

Although the Chinese officials deny the need for QE - it looks as if that's whats coming. Because any more cuts to short term rates will stroke further stock bubbles.

And when QE happens (if history is any indicator) expect long-term Chinese government bonds to rally and the yuan to weaken.

With the world pre-occupied on the U.S. yield curve – which is flat and already heavily inverted – many are overlooking problems from the world’s third largest bond market.

The Chinese economy has for a long-time used debt, currency manipulation, and shady banking practices to kick the can down the road.

But with the recent economic growth slowdown and on shore bond defaults – things are looking dire. Especially as global growth as a whole stalls.

As of now: short-term borrowing costs are too low – spurring a stock bubble. And long-term rates are too high – thanks to soaring government debt and record Chinese defaults.

To give you some perspective – Chinese stocks are up already over 20% in the last month alone (mainly from trade-war fears easing). All while the Chinese economy is decelerating.

So – putting it simply – the Chinese yield curve is steepening amid an economic slowdown (which doesn’t usually happen).

Yield curves traditionally steepen when the market’s expecting higher future growth. And they flatten/invert when slower growth is expected.

So what does this mean?

I gather two things from this:

First – that China’s yield curve doesn’t contain the sorts of signals found elsewhere. Meaning that the yield curve isn’t pricing in what’s really going on in China – an economic slowdown.

And Second – the Chinese officials are stuck between a rock and hard place and will eventually engage in Quantitative Easing (QE). 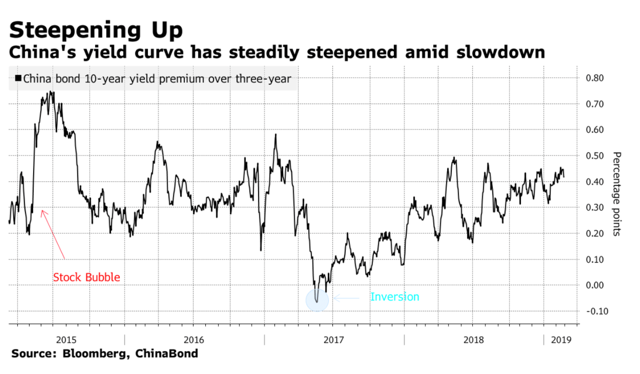 Here’s a little backstory: back in 2017 – part of the Chinese yield curve actually inverted (the 3-year yielded more than the 10-year).

And as I’ve written about many times before – an inverting yield curve’s a key signal for anticipating an economic slowdown and recession (usually with a 12-24 month lag from the moment of first inversion).

It’s a rare event – but when it happens, it’s typically accurate.

And China’s no exception. It’s clear that since this inversion occurred, the Chinese economy has slowed considerably.

This is a similar situation that the U.S. Federal Reserve had to deal with only a decade ago.

Now – the Chinese officials deny that their economy needs any monetary policy stimulus (such as QE). But they’re already implementing fiscal stimulus via huge tax cuts in attempt to stimulate growth (ease the slowdown).

Chinese short-term rates are already pretty low (as low as they were at end of China’s last easing cycle in late 2016). But this still hasn’t been enough to reinvigorate their economy (remember, a Central Bank tool for sparking economic growth is to cut short-term interest rates lower).

This means China has room to cut short-term rates. But as I wrote above – Chinese stocks are already at bubbly levels (up 20% last 30 days). Lower rates would make it even harder to prevent such bubbles.

Not to mention – lower short-term rates would put pressure on the Chinese currency – the yuan. Any sudden drop in the yuan would surely spark cries from the West about China’s currency manipulation.

Making things worse – China’s government is planning to take on much more debt this year – roughly one trillion yuan worth ($150 billion). Unless private investors come back – China’s government risks ‘crowding out’ the private sector (making them the elephant in the room).

So – if China can’t lower short-term borrowing costs (in fear of a greater stock bubble). That leaves them with attacking the long end of the curve to promote growth (this is what the Fed did with QE).

But the problem is – China prides themselves that their economy’s ‘transcended Western capitalism.’ That the Chinese model doesn’t have slowdowns. Thus they don’t need to use tools like QE.

But this end is preferable (although embarrassing) than the ruling Chinese Communist Party further watching the economy decelerate into the first recession in many years.

So in summary – disregard the steepening yield curve signal and the Chinese official statements that things are under control. It’s best to expect they will engage in more stimulus. Both fiscally and monetarily.

I have no doubts that as China’s economy stagnates, QE (Central Bank long-term bond buying) will eventually happen.

This will be a major factor for markets.

And as-long as things go as they have in the past – this gives holders of Chinese government bonds some potential upside. As the bond buying will push these bond yields lower (and bond prices higher) – giving investors some gains. (A bright spot in an ugly mess).

But – with lower borrowing costs – expect a much weaker yuan (unless private sector money flows into China and keeps flowing in – which I doubt).

In the meantime – keep an eye on China’s yield curve. But take what it signals with a grain of salt. (As always with any Chinese data).

Additional disclosure: The piece is from my original write-up at SpeculatorsAnonmyous.com. All ideas expressed and charts are my own.

Follow Adem Tumerkan and get email alerts
+
Add a comment
Disagree with this article? Submit your own.
To report a factual error in this article, click here.
Your feedback matters to us!