The U.S. economy has experienced the longest duration of expansion since the Great Recession. We believe that a defensive investment strategy could be beneficial in the next 24-48 months.

The benefit of a good defensive investment strategy is to provide a steady stream of cash flow, diversification, and good performance in comparison with major indexes.

Editor's note: Seeking Alpha is proud to welcome Matt Christopher as a new contributor. It's easy to become a Seeking Alpha contributor and earn money for your best investment ideas. Active contributors also get free access to the SA PRO archive. Click here to find out more »

The U.S. economy has maintained a long period of economic expansion. However, there are signs pointing to a recession in the next 12-24 months. For instance, the inversion of the yield curve has preceded every major economic downturn over the past 50 years. This inversion took place in December 2018 for a short period of time. Major volatility also took place toward the end of 2018 with the VIX spiking as stocks incurred wild swings with losses in value.

The U.S. Federal Reserve is taking a dovish position in being patient with future rate hikes in fear of an economic slowdown. Daily news and journal reports appear to be uncertain or mixed for 2019 and 2020. Economic data from Europe and China indicates an economic slowdown in growth in comparison to the past. Therefore, a good defensive investment strategy would provide a hedge for all the uncertainty above. The strategy will be carried out through selection of three investments including consumer staples, utilities, and gold.

A good defensive investment strategy usually focuses on investments that perform well and maintain their value during an economic downturn. We looked at three typical defensive sectors and the relevant vehicles to see how they performed during the Great Recession. The three investments are SPDR Consumer Staples (NYSEARCA:XLP), Vanguard Utilities (NYSEARCA:VPU), and SPDR Gold Shares (NYSEARCA:GLD). We tracked and analyzed their performance to determine which one was the single best bet in preparation of the next recession. In addition, we are using the SPDR S&P 500 ETF (SPY) as the market performance benchmark.

XLP has performed well during past recessions in the United States. Consumer staples are composed of companies that create items that people are going to buy no matter what the case is in terms of the economy. A few examples of companies that are considered consumer staples stocks and are included in the XLP are Coca-Cola (NYSE:KO), Proctor & Gamble (NYSE:PG), and Walmart (NYSE:WMT). As Yahoo Markets reporter Myles Udland stated on Business Insider: "Consumer staples, which comprises about 10% of the market, has beaten the S&P 500 by 49% in the last 25 years, though most of this outperformance was created during 3 periods: 1990-93, 2000-03, and 2008-09."

In addition to consumer staples consisting of necessary items that consumers will buy during a recession no matter what, they also provide low volatility and a stable steam of dividends. XLP provides an annual yield of over 3%, which is greater than the annual ~2% yield of SPY. At the same time, based on the chart, during the economic crisis of 2008, the XLP performance divert away from the SPY and provided a higher return to the investor than the market. Therefore, XLP can be used as a solid defensive investment. 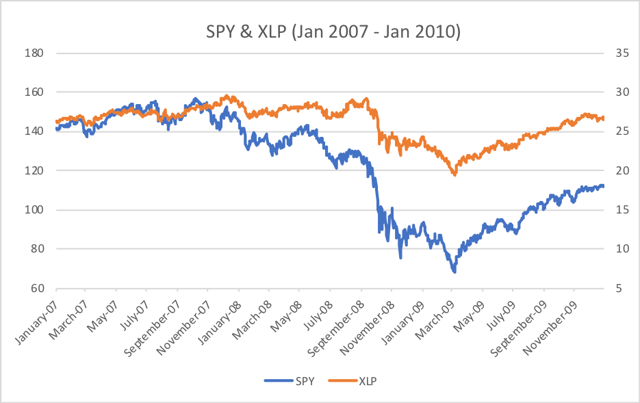 VPU maintained its value through the Great Recession, and the investment outperformed the S&P 500. The fund portfolio includes large gas, electric, and water companies with highly stable dividend yields. Some of these utility companies include Dominion Energy (NYSE:D), Duke Energy Corp. (NYSE:DUK), and Southern Co. (NYSE:SO). With the diversification of these companies within the portfolio, VPU outperformed the dividend yield from the SPY during the economic crisis in 2008.

According to the graph, the yield in dividend from SPY is reduced during the recession, while the yield in dividend from VPU saw a minor increase during the recession. Likewise, in terms of company valuation, utility companies provide solid value during weak economic periods as they are necessities that people cannot go without. VPU experienced a smaller fluctuation in price as well as volatility. VPU is also highly liquid, making it the second largest fund focused on utilities. Therefore, all these factors support the VPU as a solid defensive investment. 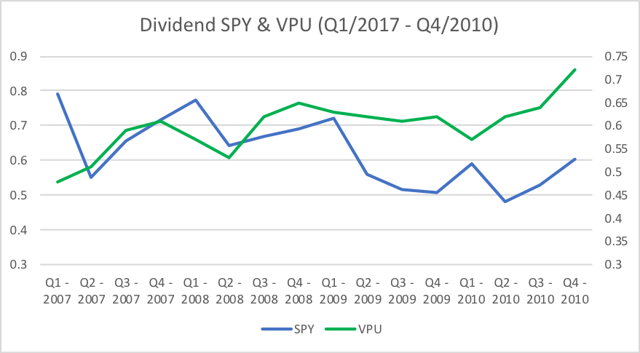 In preparation for the long overdue recession, the best defensive investment is gold. Specifically, we recommend an investment in GLD. Gold outperforms other investments in volatile times. During the height of the Great Recession, GLD rose while other defensive investments fell along with the S&P 500. Investors turn to gold as a commodity with real value when there is uncertainty in the economy. 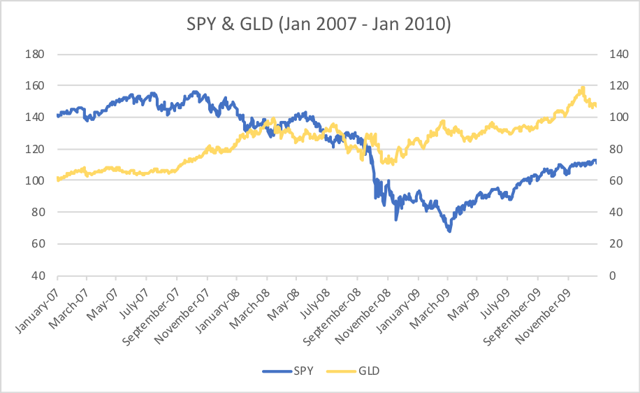 In December 2018, the market experienced high volatility and great uncertainty over the interest rate hike. In a three-week period from Dec. 4 to Dec. 24, the SPY dropped over 12%, while GLD gained over 2% in the same period. As shown in the graph, during the period from January 2007 to December 2010, GLD price performance remained relatively steady and predictable. GLD also outperformed XLP, VPU, and most importantly SPY. The market indicators certainly point out that gold through the vehicle of GLD can be used to hedge against the uncertainty of the market.

Additionally, we believe that people should use GLD to better diversify their portfolio from uncertainty and adjust their risk accordingly. As mentioned above, SPY dropped over 12% while the GLD gained over 2% during the three-week period of Dec. 4 to Dec. 24, 2018. This shows that GLD has a small negative correlation to no correlation whatsoever with the general market. In fact, similar to the small correlation we have discovered, the historical data from Institutional Investor Trang Ho wrote that "over the past 10 years, Gold has a correlation ratio of only 0.09 with the SPY … and has an annualized return of 9.8 percent annually." Therefore, GLD is a perfect tool to hedge and to diversify from other holdings in the portfolio during turbulent times.

However, diversification and proper hedging through GLD is not our only recommendation. We believe during economic downturns and periods of slow growth, GLD not only protects investors against unforeseen risks, but also provides positive returns. During the 10-year period since the inception date of GLD from November 2004 to November 2014, GLD provided a staggering return of over 148%. In annualized term, GLD provided over 14% of return to investor each year without even considering the yield or dividend. This figure surpasses the historical average of 9.8% of the S&P 500.

Lastly, the introduction of ETF creates a mainstream for investing. We believe that investors should not hold physical gold bars to protect or hedge holding from risks; instead, we recommend holding ETF vehicles that are frictionless in trading, highly liquid, and free of custody. We believe that holding the GLD is a great way for investors to take advantage of gold while the price of gold is still low. Beyond our recommendations of GLD, investors can choose two other gold ETFs that are also highly liquid for trading, including VanEck Vectors Gold Miners (NYSEARCA:GDX) and iShares Gold Trust (NYSEARCA:IAU).

All three traditionally defensive investments we analyzed achieve the same objectives in providing stability, earning steady returns, diversification, and outperforming the S&P 500 during an economic downturn. GLD outperformed the other two investments by a fairly wide margin. Considering the signs of a recession looming on the horizon, investors should consider shuffling their portfolio and taking a long position in gold by repositioning their portfolio accordingly to achieve optimal outcome and performance.

Follow Matt Christopher and get email alerts
+
Add a comment
Disagree with this article? Submit your own.
To report a factual error in this article, click here.
Your feedback matters to us!