February was a pretty good for utility stocks as they were the third best performing sector for the month. The Utility Select Sector SPDR ETF (XLU) outperformed the S&P 500 by 87bp. The gains still weren’t enough to make up for the weak January, though utilities have now passed the XLV and the XLP on a year to date basis.

Interest rates were a slight hindrance to utility performance, as the rate on the 10-year US Tresaury rose 8bp during the month. 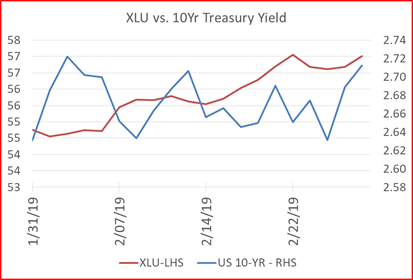 Utilities had a bit of a tailwind from investors, as the AUM of the XLU increased almost 10% to a month-end record of $9.0B. 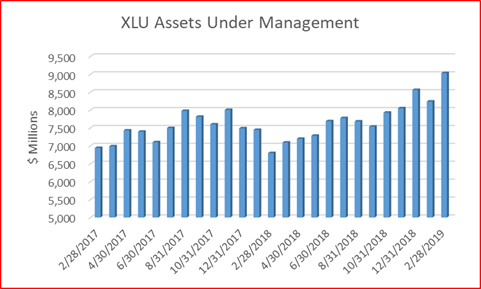 Here is how the different XLU components performed during February. 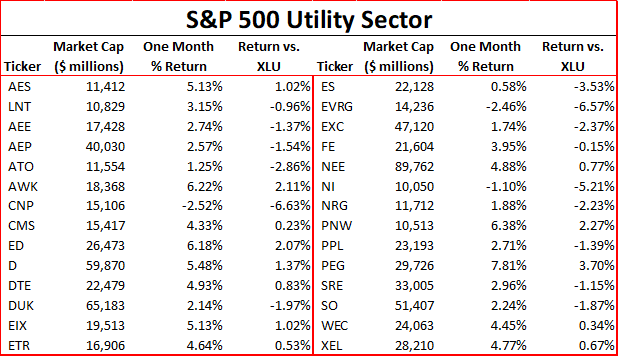 The leading utility was Public Service Enterprise Group (PEG), which increased 7.8% in February. Throughout the month performance was just a hair above the XLU, until the end when it made a big jump. This was related to their 2018 earnings release, where they beat Q4 estimates by $0.02. PEG also released 2019 guidance, which came in at $3.15-3.35/share, well ahead of the $3.12/share the company earned for all of 2018. The earnings presentation also extended PEG’s CAPEX forecast out to 2023 with another year of substantial growth. Additionally, a week before the earnings release, PEG raised its dividend 4.4%. 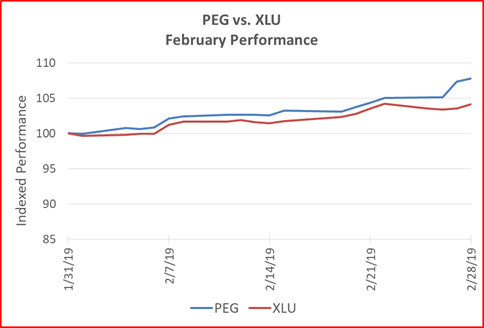 The second best performing utility in February was Pinnacle West (PNW), which rose 6.4% during the month. PNW basically followed the XLU’s performance for most of the month, and then had an extra jump during the last week of February. At that time PNW released its Q4 results, and they beat Street estimates by 6¢ per share. 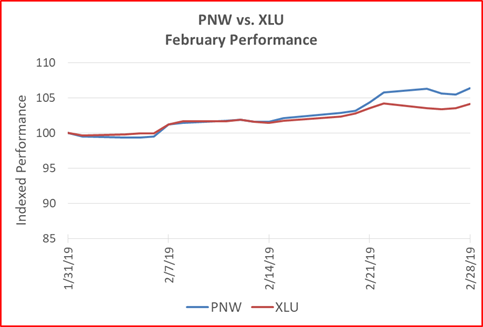 The worst performing XLU component was Centerpoint Energy (CNP), which declined 2.5% during the month. The big driver of the decline came after CNP released its 2018 results. At that time they actually beat the Street’s Q4 estimate by a penny ($0.36 vs. $0.35), but the big disappointment came from its updated guidance. Throughout 2018 (and most recently in its Q3 earnings presentation) CNP had shown a 2020 “potential” guidance number of $1.76-1.98/share. CNP had discussed 2020 because it wanted to show the full year earnings potential after completion of the Vectren acquisition. The acquisition was completed on February 1, and the 2020 guidance shown in the Q4 presentation then declined to $1.75-1.90. During the call management stated that the biggest driver for the decreased range came from the midstream segment, and that commodity prices had moved some since management had first made its estimate. 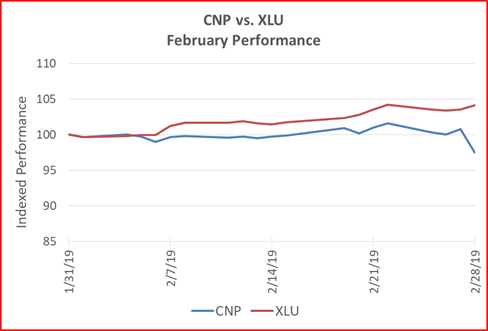 The second worst performing XLU component was Evergy (EVRG), which also declined 2.5% for the month. The stock had been moving along with the XLU in February, but then earnings were released on the 22nd, and the stock fell over 7%. Part of the decline came from missing estimates for Q4. The Street was expecting $0.23/share, but actual results came in at $0.08/share. Additionally, EVRG lowered the growth outlook for the company. Projected EPS growth went from 6-8% to 5-7%, and rate base growth went from 3-4% to 2-3%. 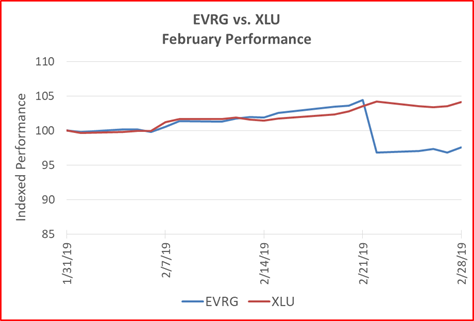 Most of the XLU components released earnings in February. Exhibit 9 shows how the actual results compared with Street estimates.

February was not a very exciting month for power markets across most of the nation, as prices were about the same as last year. This year's weather was similar to last year's as shown in Exhibit 11. The similar weather led to similar consumption. (see Exhibit 12) 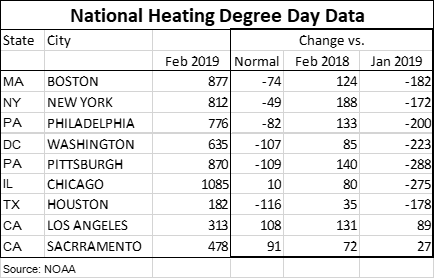 January was much colder than February, so when comparing the two most recent months February power prices ended up much lower. Exhibit 12 also shows that all regions used much less power in February than in January and the peaks in each region were lower as well.

The exception to these national power trends was on the west coast where power prices were substantially higher compared to January and last February. On the surface these seems very surprising because total power consumption was down 10% vs January and was basically flat compared to last year.

The reason for the dramatic prices in the west came from issues in the natural gas market. Back in October Enbridge's (ENB) Westcoast Energy Pipeline ruptured and severally reduced gas flows into the northwest. This has made natural gas prices at the Sumas hub, located in Washington State very volatile. Exhibit 13 shows how Sumas prices have moved the last few months compared to the Henry Hub price, and the price at the PG&E gate in California.

Wholesale electricity prices are usually based on the generation cost of the last power plant to contribute power to the system, and since the last plant typically runs on natural gas, the price of this fuel has a big impact power prices. The high gas prices raised generation costs in the northwest, and this had a ripple effect along the west coast into California.

With the exception of local issues, like those discussed above at the Sumas Hub, there was not much action in the natural gas markets during the month. Henry Hub prices ended January at $2.82/mmbtu, and they ended February at $2.89. 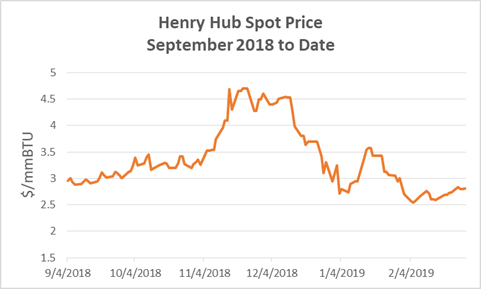 Gas in storage is still at a deficit compared to last year. 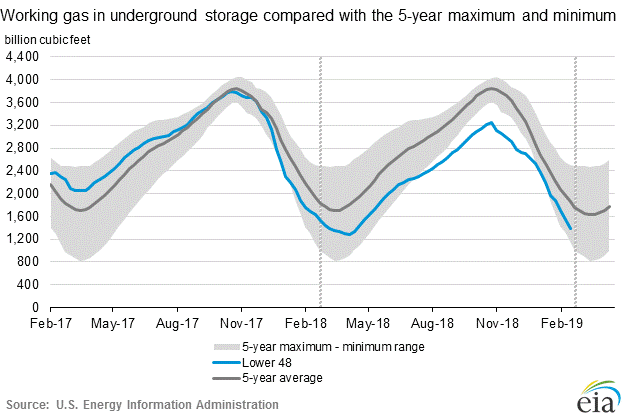 The natural gas futures curve basically didn't move during the month. The market still seems to have a pretty negative outlook for prices after 2019. 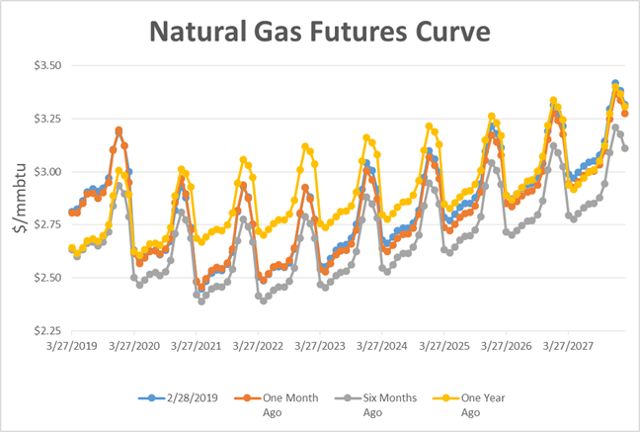 Robert Howard, CFA
410 Followers
Rob Howard is Co-Manager at Boiling Point Resources. Rob has extensive background in the utility industry working at Baltimore Gas and Electric for over seven years. While there he spent time in Distribution Engineering, Demand Side Management, and Rates and Regulation. This hands on experience has given him a deep understanding of industry issues. After his industry experience Rob moved to the investments business, where he has been following utilities since 2002. Rob has a BS in Engineering and a BA in Economics from Swarthmore College. He has an MBA in Finance from The University of Texas. He is also a CFA charterholder.

Disclosure: I am/we are long PEG. I wrote this article myself, and it expresses my own opinions. I am not receiving compensation for it (other than from Seeking Alpha). I have no business relationship with any company whose stock is mentioned in this article.