Voestalpine (OTC:VLPNF | OTCPK:VLPNY)is in more than 50 countries a leader in manufacturing, processing and developing sophisticated steel products. Especially for technology-intensive sectors like automotive, railway and aerospace.

The concern is divided into 4 divisions. 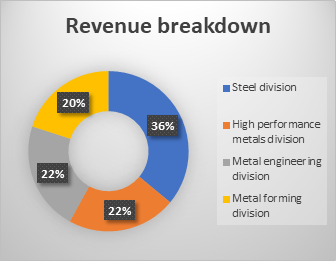 The steel division focuses on high quality steel strip and is a market leader in heavy plate for sophisticated applications as well as casings for large turbines. Voestalpine is partner for Europe’s automobile manufactures and automotive suppliers. The heavy plate is used in the energy sector under extreme conditions in the oil and gas industries (deep-sea-pipelines).

The high-performance metals division is a worldwide leader in tool steel and has a leading position in high speed-steel and special forgings. The high-performance metals have specific properties for high resistance to wear, polishability and toughness. There the customers are as well the automotive and consumer goods industries, power plant construction and oil and gas industry with special components. The forgings are used in aviation and power generation industries.

The metal engineering division is worldwide market leader in turnout technology and European market leader in rails. These rails are ultra-long (up to 120 meters) and head-hardened. Seamless tubes for the oil and gas industry are also produced there.

In the metal forming division tubes and precision strip steel products made of pressed, stamped and roll formed parts are produced. The material expertise and processing competence give Voestalpine a good know-how edge. The division is for customers who are looking for innovation and quality. 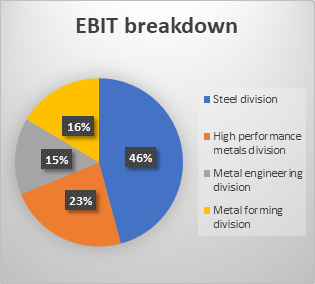 If the economy is growing the demand for steel is growing as well. Therefore, the major driver for the growth of Voestalpine is the economic increase.

Most of companies in the steel sector are operating in countries with low labor and energy costs. Voestalpine went a different way. As they are one of the biggest companies in Austria, they had to focus on knowledge and develop a way of producing steel with a higher quality and not mass to compete on the world market. They are cooperating with universities and research institutions. They used 152 MEUR for Research and Development in 2017/18 and are aiming to invest 172,5 MEUR in 2018/19.

For Voestalpine it is necessary to specialize and maintain their technology and quality leadership say Head of R&D Franz Androsch.

The main are of research is the improvement of the properties of steel for individual requirements or special problem solutions like wear and rolling contact fatigue-resistant rail steels and life cycle-optimized turnouts including diagnostics systems. A research program is for lightweight components in steel and hybrid materials as well new forming processes for light alloys.

Another area of research is the process of the production, the aim is a smart production and the improvement of additive manufacturing. For that matter Voestalpine is building a new production site in Kapfenberg, Austria. From 2021 onwards, the site should produce 205,00 tons of sophisticated high-performance steel. This steel is ideal for the aviation and automotive industries.

8,000 process data will be recorded and analyzed. The digitalization should Voestalpine allow to get even higher material qualities. Not only in the digitalization is Voestalpine setting standards but for environmental protection as well. The electric arc furnace, which melts down the scrap and various allows, will be operated by using only renewable energy. The heat from the production will be used as well or fed into the public district heating network.

The whole production process is digitalized from the supply of the raw material to the melting furnace, the ladle furnaces, the casting area and transfer of the finished ingots to the processing plants.

To set a new industry standard Voestalpine is partner in the development of “green” hydrogen to decarbonize the steel industry. They build a cutting-edge hydrogen pilot plant for the development of alternatives to fossil fuels and are expanding their production capacities in high-tech automotive components. With a capacity of 6 megawatts, this is the most effective and advanced plant of its type and is able to produce 1,200 cubic meters of hydrogen an hour. The goal is to achieve an efficiency of 80 % in converting electricity into hydrogen. The hydrogen can then be stored and used as raw material in industry and as fuel for mobility. The hydrogen is “green” because the electricity comes from Verbund, an Austrian electricity producer, which generates its energy from almost 100% of renewable sources. The plant is used for research into future breakthrough technologies.

The “America First” policy of US-President Donald Trump is affecting Voestalpine. Voestalpine generates 1.3 bn EUR of revenues in the USA. About two third derived from domestic US production. These results to around 3% of the whole revenue of the company. Voestalpine operates 40 productions sites in the USA. This risk factor is manageable.

One of the highest risks is in the cyclicality of the whole economy. If the general economy thrives the demand for high quality steel is higher and vice versa. A recession would draw down the revenues and the earnings of Voestalpine.

Another risk for the bottom line are higher energy costs or higher environmental regulations.

I do not think the debt is a major risk as Voestalpine is lowering its net financial debt consistently over the years. 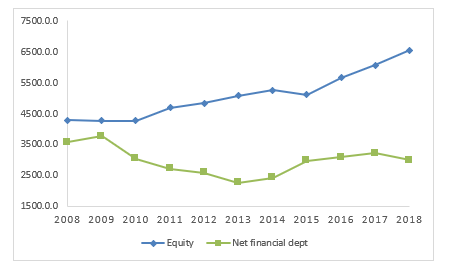 Dividend investors need to be very carefully if they buy this stock. There the cyclicality is the most important thing to keep in mind. The dividend has not reached pre-crisis levels. But if you are an anticyclical investor you had the dividend nearly tripled. For dividend investors the key question is when the next recession is coming and how much Voestalpine needs to cut the dividend. 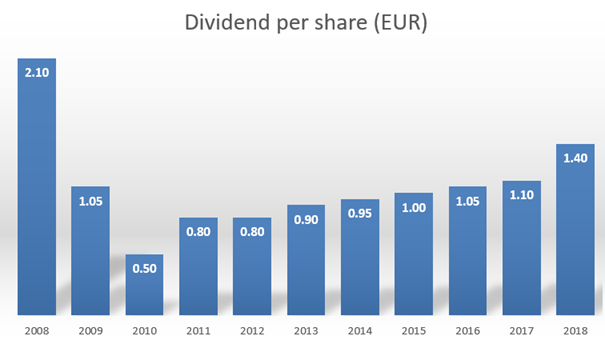 What I like about the shareholder structure of Voestalpine is that around 14% of the company is held by employees. In my opinion this is a great way to motivate the employees and to increase entrepreneurial thinking in the company.

Currently Voestalpine is trading at a P/E ratio of 10 and a consensus forward P/E ratio of around 7 accordingly to Morningstar.

The cyclicality of the stock is best shown trough their revenues and EBIT over the years shown in figure 7.

During the financial crisis of 2008/2009 their revenues declined 18%, yes not that much, but more significantly their EBIT declined 70%. It went back to the pre-crisis level only one year afterwards. Then the EBIT was nearly flat and saw a strong increase in the last year of about 43%. If we compare that to the chart of the stock, we see the declines of 2009, 2011, 2015 and the strong increase 2017. But what happened in 2018? The answer are the concerns about a trade war and tariffs on steel. As described in the risks section, Voestalpine is not really harmed from tariffs. The potential economic drawdown following a trade war is what is depressing the stock price.

For my valuation I took the last 5 years average earning and build a small model around it to get to the fair value of the company. I used a 15% discount rate and 10 for the terminal value. The high discount rate is due to the cyclicality in earnings, the probability of a recession in the next year(s) and as a protection against my general mistakes of the estimations of the growth.

I made a good-case, a bad-case and a normal-case scenario: 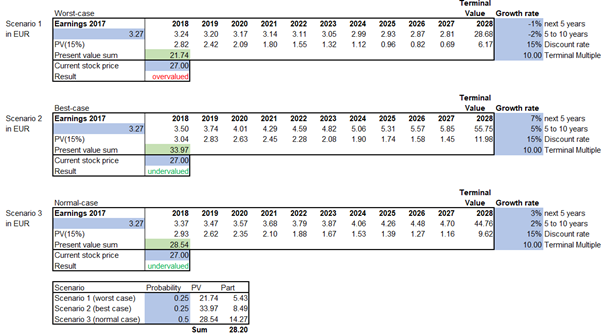 Voestalpine is an interesting company and will be still around in the next 10 years. With my conservative estimations the fair value is at around28 EUR. It seems to be a buy. Personally, I will wait until the stock decrease to around 22 to 24 EUR. The cyclicality is my major concern and I want a good margin of safety which is in this case an even lower stock price.

Additional disclosure: International investors please keep an eye on the liquidity of traded shares, they may be low outside of Austria/Germany