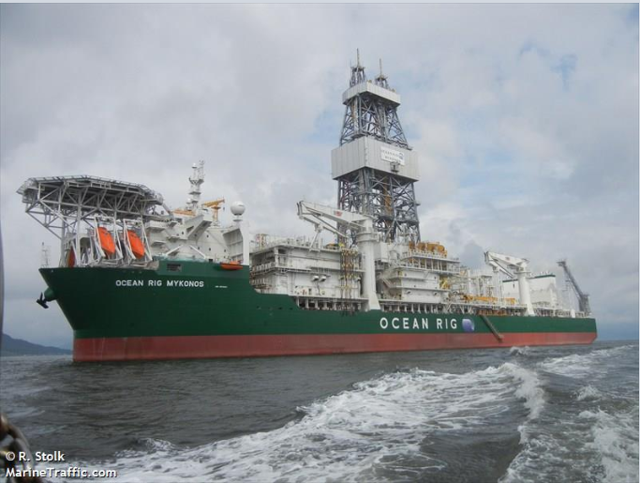 The announcement of these contracts is not a surprise for anyone who follows the industry. In fact, the contracts for two Ocean Rig drillships have been widely discussed in the comments section of my offshore drilling-related articles and the articles of fellow contributors. However, the exact duration of these contracts and, more importantly, the dayrates remained a mystery. Now that we have this data, I can reiterate that Transocean's optimism regarding dayrate upside is once again not confirmed with actual data.

The dayrates are a clear disappointment. Bassoe Offshore database shows that drillship Amaralina Star has recently received a short-term contract with Total (TOT) at a dayrate of $215,000. Amaralina Star is nothing special: the rig has a hook load of 2,000 kips and no managed pressure drilling package. On the other hand, Ocean Rig Mykonos that has a hook load of 2,200 kips, which has been upgraded with a managed pressure drilling package and got fixed on a long-term contract, received the very same dayrate.

One cannot assign all the blame on Transocean since the contract negotiations have obviously started back at the time when Ocean Rig was a standalone company, but the numbers are still very disappointing. In my opinion, these contracts highlight how reckless financially was the decision to purchase Ocean Rig. Brazil is a high-cost place, so the rigs on these dayrates won't be material providers for the company's cash flows. Comparison with the recent fixture for the Amaralina Star shows that the job was won solely on price - and that low price will stay for an average of 590 days!

Meanwhile, Transocean is still stuck with the cold stacked Ocean Rig Apollo, Ocean Rig Athena, Ocean Rig Mylos and Ocean Rig Olympia while it also has to find work for drillships Deepwater Champion, Discoverer Luanda, Discoverer Americas, and Discoverer Clear Leader. Current dayrates ($175,000 according to Bassoe Offshore; actual fixtures depend on rig quality and region of work) are too low for drillship reactivations, and Transocean has already painted itself into the financial corner with overly aggressive acquisition. This means that months and, likely, years of stacking are ahead for many of the above-mentioned rigs. At this point, it looks like Transocean will ultimately take the dubious crown of being the leader in modern drillship scrapping - this process has already begun with the scrapping of Ocean Rig Paros.

At this point, I do not see catalysts outside of a potential oil price rally that could take Transocean (RIG) shares above the $9.00 level. The company has bet the farm on ultra-deepwater drilling with the acquisition of Ocean Rig, and so far, this acquisition looks very troubling for Transocean.

The contracts for Mykonos and Corcovado highlight how dire Ocean Rig was to get contracts and keep at least some of its rigs afloat, a problem which was effectively transferred to Transocean following the acquisition. There are major doubts about the viability of the company's stacked drillships due to prolonged stacking, future unstacking costs, and the company's financial position. To have upside from current levels, Transocean needs a material and robust improvement in the ultra-deepwater market segment. Otherwise, the shares are destined for range-bound trading or even downside from current levels.

Vladimir Zernov
16.15K Followers
I'm a trader who trades both short-term and long-term. I started my career as a day-trader for a trading firm, but then turned to longer time frames and went on my own to manage my portfolio. I use technical analysis as well as fundamental analysis in my research.