"I have learned to seek my happiness by limiting my desires, rather than in attempting to satisfy them.” ― John Stuart Mill

Today, we take a look at one of the riskier small cap holdings in my portfolio. The company occupies a particularly volatile part of the domestic energy sector. While high risk, if everything falls right over the coming quarters and years, this stock has the potential to be a 'multi-bagger'.

Based in The Woodlands, Texas, Smart Sand, Inc. (NASDAQ:SND) is a pure-play producer of Northern White raw frac sand, which is a proppant used to enhance hydrocarbon recovery rates in the hydraulic fracturing of oil and natural gas wells. Although headquartered in Texas, the company’s operations are in Wisconsin, home to its operating frac sand mine and processing facility. Smart Sands has ~58% of its capacity contracted under take or pay agreements that average ~2 years in length and are generally indexed to WTI Spot Prices.

In addition to frac sand sales, Smart Sand generates revenue from the transportation of its sand, and customer usage of its railcars. Founded in 2011, Smart Sand went public in November 2016, raising net proceeds of $121 million at $11 per share. This busted IPO currently carries a market cap of ~$100 million.

Smart Sand’s 1,196-acre Oakdale, Wisconsin site has ~321 million tons of proven recoverable sand reserves as of December 31, 2017 and current capacity to produce ~5.5 million tons of frac sand annually with ultimate capability to produce ~9 million tons per year. The property contains on-site rail infrastructure and wet and dry sand processing facilities. In addition to its Oakdale property, the company owns a second Wisconsin asset, a 959-acre site known as Hixton, that possesses 100 million tons of proven recoverable reserves located adjacent to a Class I rail line. Also, Smart Sand has mining leases on two properties in the Permian Basin of Texas that are available for development.

The company’s Oakdale operation is one of ~44 active Northern White sands mines in Wisconsin that combine for approximately half the country’s total installed frac sand capacity. Frac sand comprises ~90% of all proppant demand. This proppant is fed into blenders at drilling sites, where it is mixed with fluid for pumping down hole. The top of the line quartz-rich, high-purity, silica-rich Northern White sands – ideal for well stimulation, versus other “brown” frac sands – are found predominantly in Western Wisconsin and limited areas of Minnesota and Illinois.

Even though fracking activity is off markedly from 2014 highs when the horizontal rig count peaked at 1,370 – it was 932 for the week of January 25th, 2019 after bottoming at 315 in May 2016 – the amount of proppant use has increased, owing to a substantiated positive correlation between proppant volume and well productivity. Combine the trend towards longer laterals and denser frac stage spacing – resulting in higher stage counts - with increased proppant intensities per stage and the result is average proppant usage per well jumping from ~3,000 tons in 2014 to ~7,100 tons in 2018. Overall demand for frac sand is expected to double from 2017 (148.4 billion pounds) to 2022 (299.1 billion pounds). 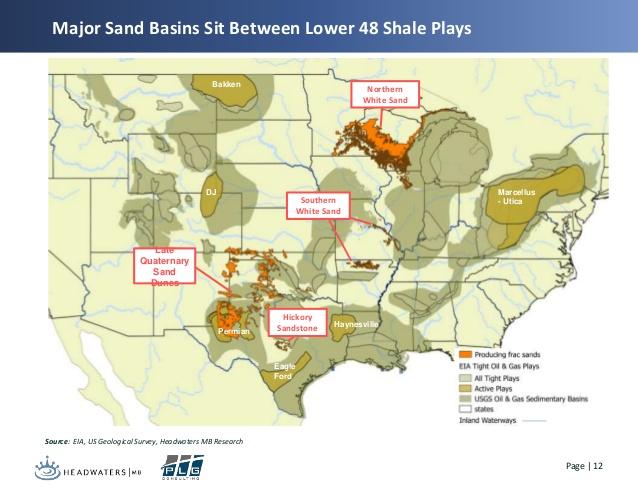 About 37% of the proppant demand comes from the Permian Basin with the Appalachian and Eagle Ford Basins comprising ~32% of demand. By contrast, Smart Sand sells 36% of its sand into the Bakken Formation, 31% to the Marcellus (Appalachian), 18% to the Permian, and 15% to other areas. Management considers its main competition Badger Mining Corporation, Covia Holdings Corporation (CVIA), Emerge Energy Services LP (EMES), Hi-Crush Partners LP (HCLP), and U.S. Silica Holdings, Inc. (NYSE:SLCA).

In the face of this competition, Smart Sand completed an expansion at its Oakdale facility enabling it to process and deliver 5.5 million tons per annum, up from 3.3 million tons. This capacity came on line in 2Q18.

Also, the company acquired the rights to operate a unit train capable transloading terminal in Van Hook, North Dakota to service the Bakken Formation. Like the Oakdale facility upgrade, this asset came on line in 2Q18. In addition to the lease agreement, the company paid ~$15.5 million for certain assets at the Van Hook terminal. This transloading terminal is supported by an anchor customer contract. 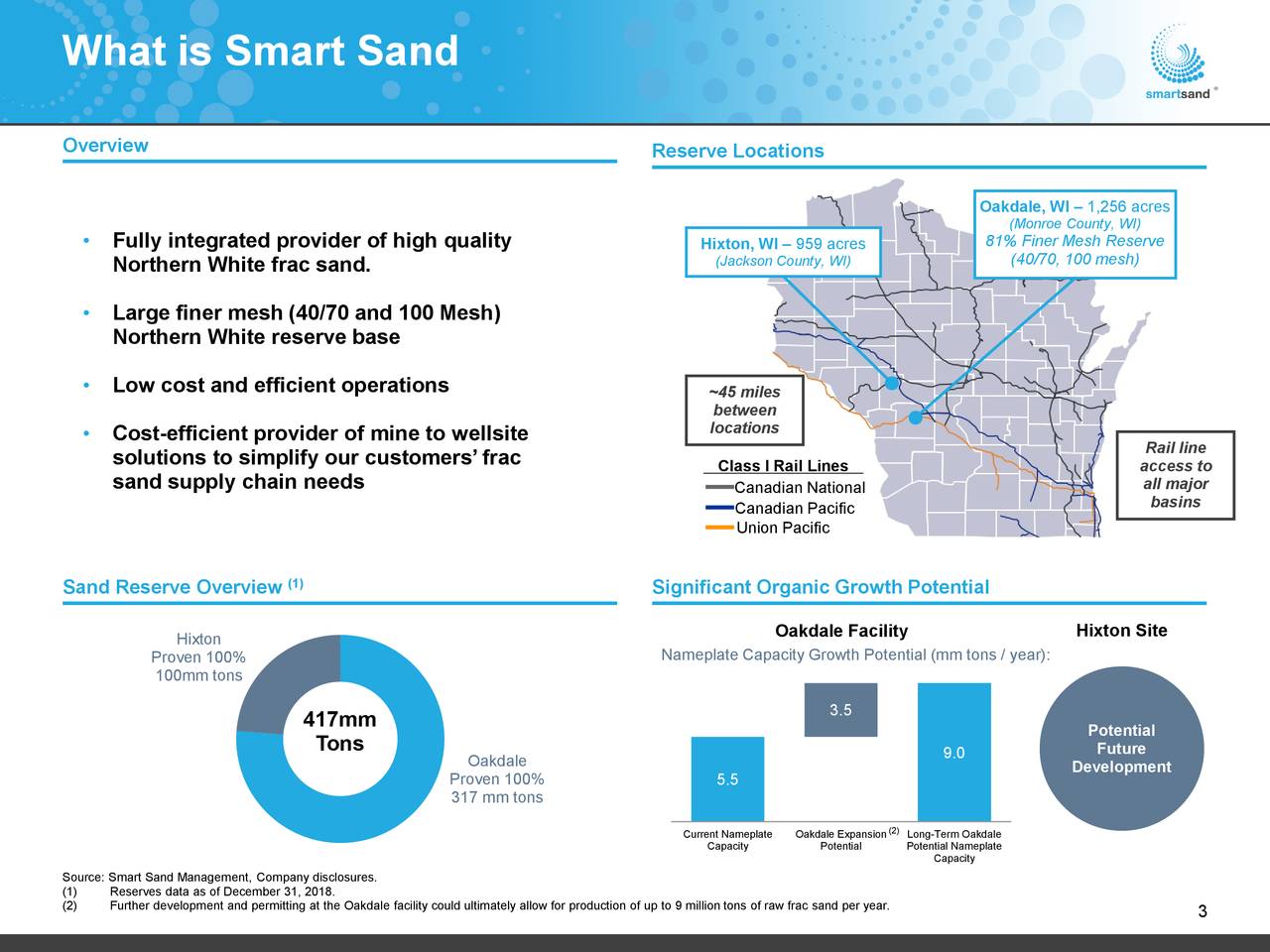 Then on June 1st, 2018, Smart Sand acquired Quickthree Solutions, Inc., a manufacturer of portable vertical frac sand storage solution systems for $30 million and earn-out payments over a three-year period totaling $12.8 million. These portable silos can be erected or taken down in a matter of minutes and can be filled by both gravity-driven and pneumatic dump trailers, meaning truck turns up to five times faster than pneumatic alone. This addition allows Smart Sand to provide a mine-to-wellsite delivery solution for its customers. Smart Sand’s first fleet of silos have been produced with its first wellsite storage systems scheduled to be operational imminently.

In addition to its high-quality, long-life reserves with significant room for organic growth, Smart Sand’s point of differentiation is its production site, which integrates mining, plant, and rail facilities that can deliver frac sand to all major basins by an on-site rail facility that can accommodate multiple unit trains and are connected to a Class I rail line owned by Canadian Pacific. A unit train is a train in which all cars carry the same commodity and are shipped from the same origin to the same destination, without being split up or stored en route. Unit trains usually take approximately one-third the time of manifest trains to reach their destinations. This undercurrent can significantly reduce transportation costs.

Also, evidence provided by industry sources suggests that increasing reservoir contact area has resulted in greater yields. Increasing reservoir contact area can be accomplished through higher mesh (100 or 40/70) sands, which should result in greater demand for these proppant types. This dynamic should act as a tailwind for higher mesh sand provider Smart Sand. 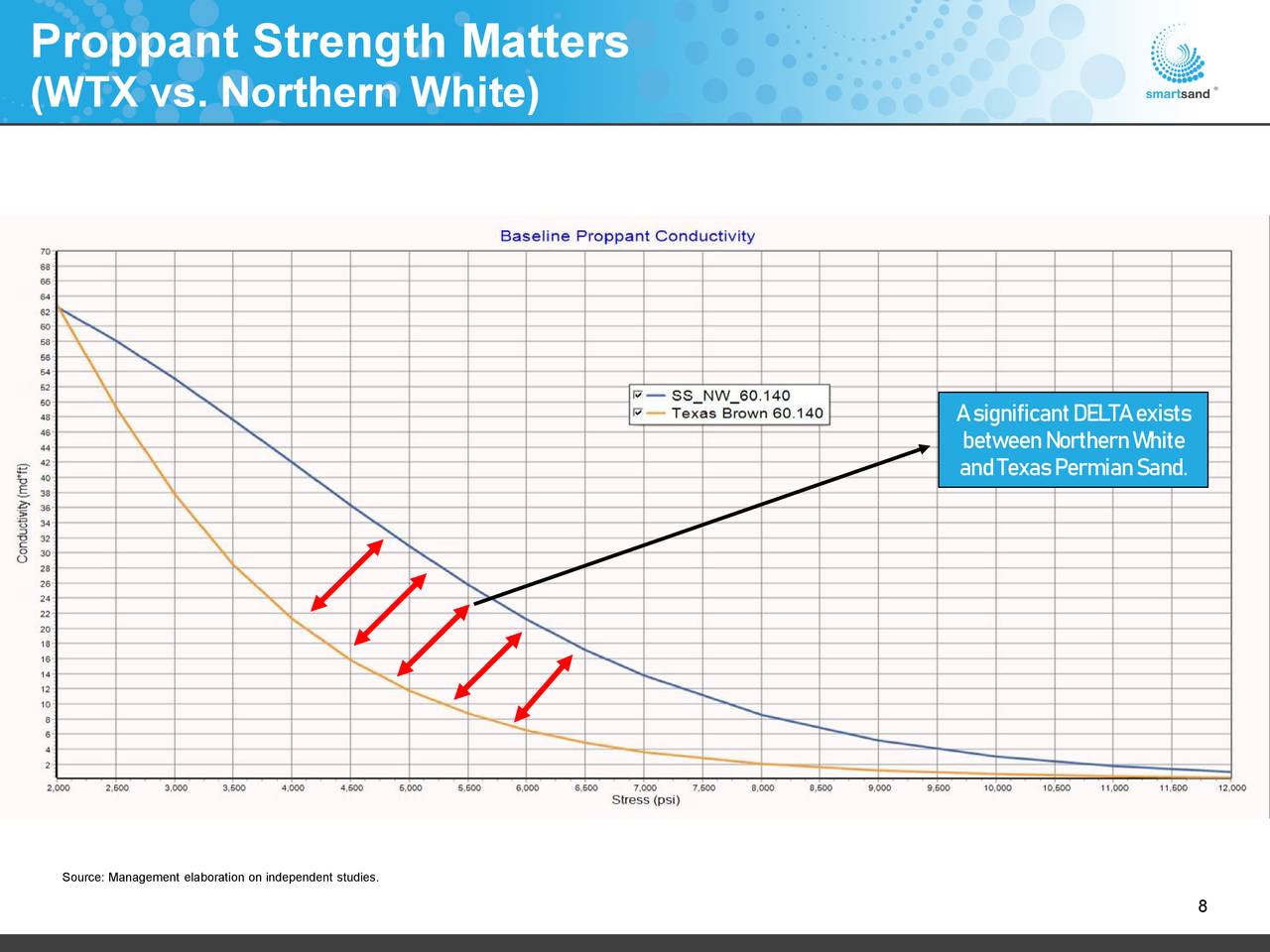 However, significant new supplies of regional frac sand from the company’s competitors came online in 2018, including mines and production facilities from U.S. Silica and Hi-Crush in the Permian. In a declining price environment, E&P companies are more likely to source cheaper-to-transport local sands, even if it is of lower quality. These forces in the oil-rich Permian have had a significant negative trickle-down effect on higher quality ‘foreign’ producers like Smart Sand.

Year-to-date, Adj. EBITDA totaled $47.2 million, which was outpaced by $111.6 million of capital expenditures – $51 million for Van Hook and Quickthree as well as $55.7 million for the expansion of its Oakdale facility.

Management anticipated spending another $13-$25 million in 4Q18, with $5-$10 million going towards additional wellsite storage units. This spending is against anticipated 4Q18 Adj. EBITDA generation of $14 million based on 650 million tons of frac sand sales – both from guidance midpoints.

Thanks to its acquisitions and plant expansion, Smart Sand exited 3Q18 with only $1.2 million of cash and $15.5 million remaining on a $60 million credit facility. The company’s board has authorized a share buyback up to 2 million shares, of which it has not purchased any – not surprising given its cash situation. However, management has indicated that it believes its current share price represents an excellent investment opportunity, insinuating future purchases.

The severe drop in oil prices and concurrent shift towards local sands in the Permian basin caused two analysts to downgrade shares of SND after its 3Q18 earnings release, citing a secular decline in Northern White sands demand. There has been no analyst activity on this stock since then.

Smart Sand is currently leveraged to the worst possible situation: large amounts of local frac sand coming on line in the country’s largest producing region in a declining oil price environment. Even though only 18% of its sales were to the Permian Basin in 3Q18, the relative lack of demand in that region for Northern White Sands will mean more supply for the balance of the country. Although 58% of its capacity is sold under take-or-pay contracts, these contracts are indexed to WTI and could be further renegotiated lower if the environment doesn’t improve.

However, two infrastructures dynamics should give investors cause for hope. First, capacity constraints in the Permian Basin will likely ease when new pipelines go into service in 2H19, which will increase regional oil production and consequently demand for frac sand. Second, the infrastructure for trucking local sand in the Permian Basin is poor at best, featuring single lane roads in and out of many fields. These undercurrents will likely increase the need for both unit train transport of and wellsite storage solutions for frac sand into the basin, playing into Smart Sand’s fully integrated capabilities.

Liquidity is a concern, although it appears that the company should have enough to fund its operations. At ~$2.80 a share, Smart Sand trades at 3.8x’s 2018E EPS and 6x’s 2019E EPS. For the strong-willed investor, this busted IPO offers significant upside if oil prices increase as the Permian Basin takeaway bottleneck alleviates in 2H19 – while frac sand infrastructure bottlenecks do not.

In summary, Smart Sand, Inc. has been caught in a perfect storm – lower oil prices with a sharp uptick in Permian Basin local sand supply – resulting in a demand shift away from its proppant type. As a result, the company has lost ~70% of its value in the past 12 months. However, owing to some Permian Basin infrastructure dynamics at play in 2H19, the need for Smart Sand’s unit train-shipped, high quality frac sand could improve significantly. The shares also looked like they have formed a bottom in recent months and might be ready to move higher.

In short, Smart Sand is a poster child of a Busted IPO in a cyclical industry, very high risk/very high reward. Therefore, I would probably average into this one. The stock may remain under pressure for some months. However, if things fall correctly, I could see this being a three to five bagger as well over time. An asymmetrical risk/reward profile but an attractive one.

Bret Jensen is the Founder of and author of articles on The Biotech Forum, The Busted IPO Forum, and The Insiders Forum.

Author's note: I present and update my best small-cap Busted IPO stock ideas only to subscribers of my exclusive marketplace, The Busted IPO Forum. Try a free 2-week trial today by clicking on our logo below!

Disclosure: I am/we are long SND. I wrote this article myself, and it expresses my own opinions. I am not receiving compensation for it (other than from Seeking Alpha). I have no business relationship with any company whose stock is mentioned in this article.