This article is an update to the view that we expressed on this website during the past few months. We concluded on October 16th, 2018 that a larger cyclical correction commenced for US equity indices. Our last write-up deduced that the most recent rally from the December 2018 lows is probably a bear market bounce. We approximated it to fade within the 2,685-2,785 index points cluster. The S&P 500 index extended roughly 1% above our projected area. Nevertheless, the technical picture has not changed. Evidence suggests that US equities bounced within a bear market rally. It is probably complete at the time of this write-up.

Cyclical trends, which are comparable to the rally since the financial crisis in 2009, triggered longer corrections than what we witnessed last autumn. A trend break of the respective cycles resulted in at least a year of corrective price action. The only exception to that within roughly 150 years of S&P 500 data occurred in 1987. Hence, it is unlikely that a couple of months of downside action corrects a cycle, which lasted for almost ten years. The correction that struck US equities during late 2018 is probably not over. Instead, it is more likely that a negative price-feedback loop to the downside just started to unfold.

The 3-swing drop from the autumn 2018 all-time highs into late December 2018 is probably the initial swing of a larger degree cyclical correction. The orange and yellow trends, which are depicted in the second chart below, form a technical countertrend bounce. The entire rally shows characteristics of bear market rallies.

The majority of sentiment indicators support the case for a bear market rally. Sentiment readings reversed as quickly as price action. As an example, the AAII Investor Sentiment survey shows an optimistic picture. There are more market participants bullish relative to the survey's history. Moreover, bearish survey respondents are below the historic reading of the survey as well. Overall, this is a bullish stance. Some other sentiment gauges reached into extreme territory at the time of this update. Interestingly, retail investors assess market prospects more optimistic than professional investors. Sundial Capital Research, as another example, constructed a time series of good market timers versus bad market timers. Retail investors tended to fall into the latter category historically. The time series can be found in the bottom half of the very first chart below. The crossing of the above dotted horizontal line triggered either a sideways correction or an outright selloff during the past three years. It was crossed during February 2019 as equities recovered. 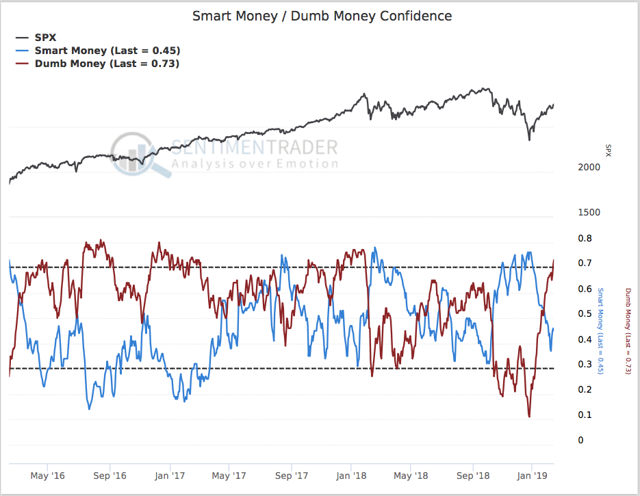 Weakening momentum readings and the aggregate macro picture support the case for more weakness ahead. Additionally, there are multiple opening gaps within the advance from the December 2018 low. These were closed in more than 90% over the past 100 years of index data. Peter L. Brandt, a widely followed trader, confirms our statistical analysis and found a similar relationship on the Dow Industrials.

Evidence suggests that equities are within a bear market rally. Can't the allegedly fading yellow trend just lead to another down-up sequence, which transforms the advance into an impulse within the Elliott wave framework? The swing within the yellow channel shows divergence relative to the orange channel. That's very rare within third waves and therefore unlikely. The S&P 500 would have to show a strong reversal to the upside on increasing momentum in order to invalidate prevailing strength conditions. However, a strong upside reversal appears very unlikely given the statistical, sentiment, and statistical evidence discussed above. 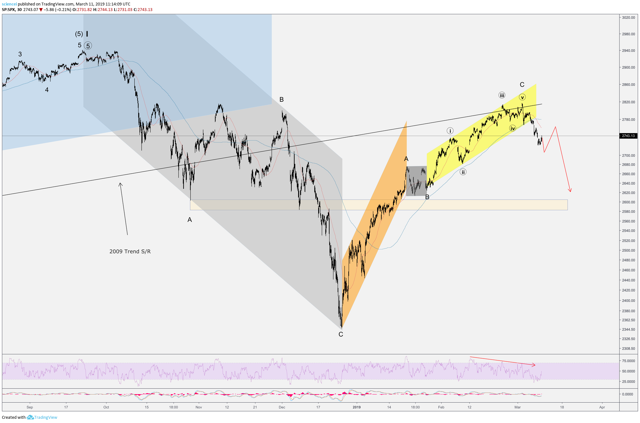 The S&P 500 index approached the 2,800-2,815 S/R cluster during the past few days. Equities reversed from that area. There were three reversals as that cluster got approached last year in October, November, and December. Technically oriented market participants will probably continue to supply that area. Moreover, an A-B-C pattern led to a cross-market non-confirmation of the recovery highs during the past few days. The major indices struck their highs a few days apart, which is typical for larger degree tops. The respective yellow trend channel supports got broken on all of the major US indices. This is most likely an early signal that the rally from the late December 2018 lows was a bear market rally. The S&P 500 is likely to target at least 2,525 index points during the next few weeks.

ESI Analytics Limited
3.76K Followers
ESI Analytics is an independent investment research firm with a focus on evidence-based investing.We have a best-in-class track record in originating actionable investment ideas. Those can be implemented standalone or together as a tactical asset allocation.ESI Analytic’s core product is a portable overlay. It is delivered as a derivatives-based model portfolio to institutional clients. Seamless integration to their existing portfolio structure improves their risk-reward in a Markowitz efficient frontier context. Individual clients can access an ETF model portfolio that replicates the institutional overlay extensively. Therefore, sophisticated individual DIY investors can benefit from an all-weather model portfolio designed to function in all market conditions. The decision-making process behind all ideas is multidisciplinary. It combines macroeconomic research expertise with behavioral finance and technical analysis. Our research and model portfolios can be accessed on scienceinvesting.com.  Robert Lefter founded ESI Analytics. He has more than 20 years of professional investment experience and is the CIO of ESI Capital, a registered investment adviser.

Disclosure: I am/we are short S&P 500 Derivatives. I wrote this article myself, and it expresses my own opinions. I am not receiving compensation for it (other than from Seeking Alpha). I have no business relationship with any company whose stock is mentioned in this article.

Additional disclosure: This idea has been shared with our clients on March 4th, 2019