Multiple LNG export projects in the US are slated to come online this year and next, adding an incremental ~6.5 Bcf/d of export capacity.

Other projects have recently green lighted construction or are nearing the start of construction, giving visibility to capacity additions in the 2022-2024 time frame.

A US-China trade deal could be beneficial for inking purchase agreements with Chinese customers as uncertainty is alleviated. 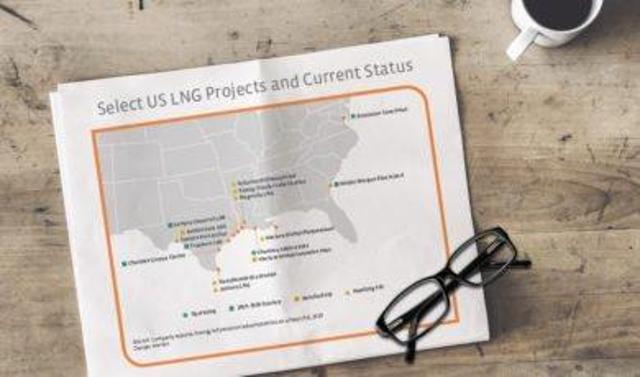 While growing exports of US oil is a positive trend for energy companies, including midstream, it is seldom a topic of conversation in investor interactions. On the other hand, liquefied natural gas (LNG) exports come up frequently in conversation. How much LNG is the US exporting today? How much is that going to grow? What's going on with that one LNG project on the coast of [insert state here]?

Today, we revisit US LNG exports to provide a status update on projects that are expected to start up this year and facilities that have recently been greenlighted to start construction, as well as pipeline projects that will supply these export terminals. We also discuss projects that are likely approaching a final investment decision (FID) this year. Lastly, we discuss US-China trade relations as it relates to US LNG exports. For a broader discussion of US LNG exports and the benefit of exports for midstream, please see our white paper from July 2018. For those wanting a sentence summary, LNG exports benefit midstream broadly by supporting growing natural gas production (through access to global demand), and these growing volumes require more energy infrastructure such as pipelines and natural gas processing facilities.

US LNG export capacity is set to jump this year and next as multiple projects gradually come online. Projects on deck include Cheniere's (NYSEMKT:LNG) Corpus Christi, Kinder Morgan's (NYSE:KMI) Elba Island, Sempra Energy's (NYSE:SRE) Cameron LNG, and Freeport LNG as shown in the chart below. The only export projects operating in 2018 were Cheniere's Sabine Pass facility in Louisiana and Dominion's (NYSE:D) Cove Point project in Maryland. Combined, these projects have a nameplate capacity of ~3.5 Billion Cubic Feet per day (Bcf/d). 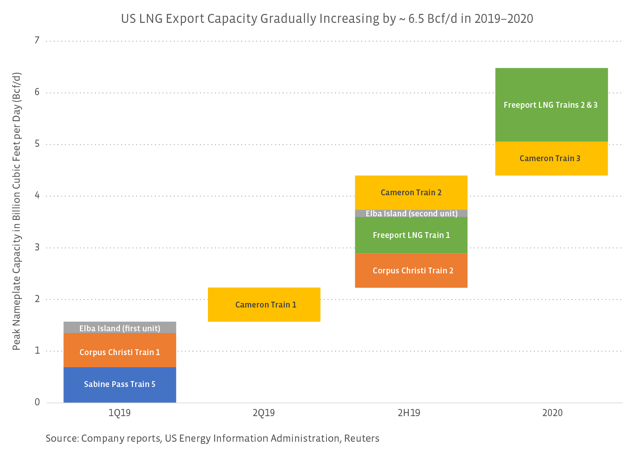 Three recent FIDs with many more waiting in the wings

Three projects in the US and Canada have recently announced final investment decisions (FID)1, paving the way for construction to begin. In October, a joint venture led by Royal Dutch Shell (NYSE:RDS.A) (NYSE:RDS.B) announced FID for LNG Canada2. TransCanada (NYSE:TRP) will build the 2.1 Bcf/d Coastal GasLink Pipeline with a 25-year agreement to transport gas to the facility. Shifting to the Gulf Coast, Exxon Mobil (NYSE:XOM) and Qatar Petroleum announced plans last month to move forward with Golden Pass LNG. Golden Pass will be the cornerstone shipper for Enable Midstream's (NYSE:ENBL) Gulf Run Pipeline with a 20-year commitment of 1.1 Bcf/d. Venture Global also announced last month that it would commence construction on the Calcasieu Pass Project. The company is also constructing the associated TransCameron Pipeline to supply the export facility.

Several projects may be knocking on the door in terms of reaching final investment decision. Specifically, Tellurian's (NASDAQ:TELL) Driftwood LNG project received the final Environmental Impact Statement (EIS) from the FERC on January 18. TELL expects to reach FID and begin construction in the first half of this year. SRE announced that its Port Arthur LNG project received the final EIS from the FERC on January 31. SRE's LNG projects are expected to be a featured topic at the company's analyst conference later this month.

Three LNG export projects expect to receive a final EIS in 2Q19, which would bring the projects closer to potential FID this year. These include NextDecade's (NASDAQ:NEXT) Rio Grande project, Venture Global's Plaquemines facility, and Annova LNG's Brownsville project. All three projects are expected to reach FID in 2H19 based on company commentary.

Other projects have received FERC approval but have not reached FID. A key priority for Cheniere in 2019 is reaching FID for Train 6 at Sabine Pass. On their recent earnings call, the management of Energy Transfer (NYSE:ET) was targeting FID for Lake Charles LNG in 1H20. Magnolia LNG has received FERC approval and is construction-ready but has not proceeded to FID. The map below shows the projects discussed above. Please note that this is not an exhaustive list of approved and proposed projects in the US, which are listed on the FERC's website in the preceding links. 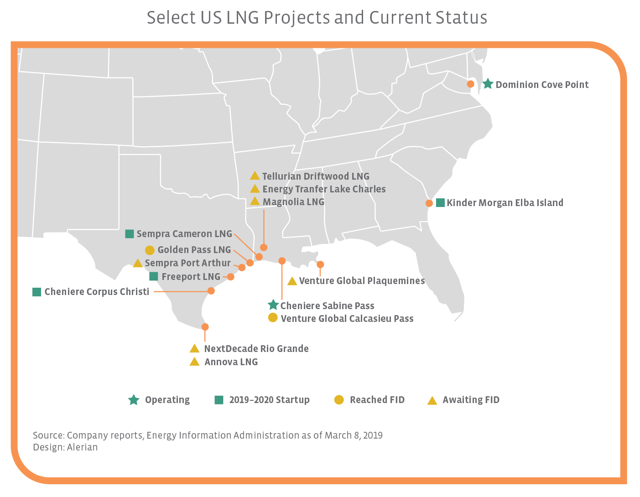 What about the impact of US-China trade relations on LNG exports?

Unsurprisingly, US LNG exports to China have tapered given the broader trade dispute and resulting 10% tariffs on US LNG. Exports to China fell from a peak of 25 Bcf in October 2017 to zero in September 2018. Volumes recovered in 4Q18 but were less than 10 Bcf per month. US-China trade relations have not slowed the overall growth in US LNG exports, which grew to a record-high 123 Bcf in December 2018. That said, the primary concern with the US-China trade dispute had been that US LNG project FIDs would be delayed by the inability of Chinese companies to sign purchase agreements amidst the ongoing uncertainty.

Media reports in recent days have indicated that the US and China are on the verge of reaching a deal. The Wall Street Journal reported that a trade deal would include an agreement for China Petroleum & Chemical Corporation (Sinopec) to purchase LNG from Cheniere under a long-term agreement. According to a Reuters article citing Sinopec's President, the company will proceed with agreements to purchase US LNG as soon as the Chinese government directs it to do so. If a deal can be reached, it would be beneficial for US LNG export projects. Obviously, there's a global market for LNG, with the US exporting to more than 30 different countries last year. However, China is the second-largest purchaser of LNG (after Japan), and undoubtedly, parties in both China and the US would like to see a robust LNG trade from the US to China.

It's a dynamic time for US LNG exports as a wave of new capacity is brought online this year and into 2020, while the next wave of capacity reaches final investment decision. An improvement in US-China trade relations may further catalyze near-term FID announcements for projects waiting in the wings.

1FID means that the company is committed to doing the project and is proceeding to construction.

2We almost exclusively focus on US LNG projects in this report, but this recent FID in Canada bears mentioning.

Disclosure: © Alerian 2019. All rights reserved. This material is reproduced with the prior consent of Alerian. It is provided as general information only and should not be taken as investment advice. Employees of Alerian are prohibited from owning individual MLPs. For more information on Alerian and to see our full disclaimer, visit http://www.alerian.com/disclaimers.

Stacey Morris is the Director of Research at Alerian, which equips investors to make informed decisions about Master Limited Partnerships (MLPs) and energy infrastructure. Ms. Morris engages with the investment community to increase awareness of the Alerian Index Series and support broader understanding of the role that midstream assets play in North American energy markets. Ms. Morris was previously the Investor Relations Manager for Alon USA Energy, overseeing investor communications for the corporation and its variable distribution MLP, Alon USA Partners. Prior to Alon, she covered the integrated majors and refiners at Raymond James as a Senior Associate in the firm’s Equity Research Division. Ms. Morris graduated summa cum laude with a Bachelor of Science in Business Administration from Stetson University, and is a CFA charterholder.

Follow Alerian and get email alerts
+
Add a comment
Disagree with this article? Submit your own.
To report a factual error in this article, click here.
Your feedback matters to us!