The tax treatment of distributions from widely held REITs is analyzed.

Effective tax rates are determined for each tax bracket.

Tax efficiency of REITs is compared to qualified dividends through an equivalent qualified yield ratio.

Real Estate Investment Trusts (REITs) are known as a tax efficient way to invest in real estate. In exchange for paying out at least 90% of taxable income to shareholders, REITs gain tax-exempt status. Instead of being taxed twice (once at the corporate level, and again at the individual level), profits are passed through to investors, where it is taxed as ordinary income.

For shareholders of REITs, the conventional wisdom is to hold shares in tax advantaged accounts because distributions are taxed as ordinary income rather than qualified dividends. However, the Tax Cuts and Jobs Act of 2018 added a 20% deduction for Section 199A dividends (the portion which is taxed as ordinary income). For many investors, this change is equivalent to a 3-5% tax cut on distributions received from REITS in taxable accounts. Given that REITs are typically higher yielding than corporations, it may make sense for income investors to hold some REITs in taxable accounts.

Although colloquially referred to as “dividends,” the income received from REITs are technically “distributions” composed of several forms of income – (qualified) dividends, capital gains distributions, and non-dividend distributions (return of capital). When investors receive 1099-DIVs from REITs, their distributions are broken down as follows:

Box 1a: Total Ordinary Dividends – this is the amount which is classified as a “dividend” and is equal to the sum of Box 1b: Qualified Dividends and Box 5: Section 199A Dividends

Box 2a: Total Capital Gains Distributions – this amount, less the amount in Box 2b, is taxed at the capital gains rate.

Box 2b: Unrecaptured Section 1250 Gains – this amount comes from the sale of depreciated property and is taxed at a flat 25%. This amount is included in Box 2a.

Box 5: Section 199A Dividends – this amount is taxed as ordinary income, but is eligible for a 20% deduction (through 2025). This amount is included in Box 1a.

What Kind of Income Are You Getting From Your REIT?

At the beginning of every year (typically end of January, but occasionally stretching into March), REITs will issue a press release indicating the tax treatment of the dividends paid in the previous year. Nareit also has a page dedicated to collecting this information. (In my experience, the numbers are correct when available, but records or fields may occasionally be missing and it is best to verify with the REIT’s press release.)

I collected the tax treatment information for 36 widely-held REITs to figure out what kind of income shareholders are receiving as distributions: 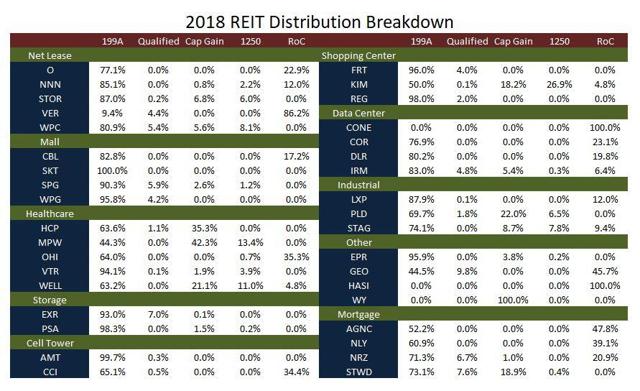 As can be seen, the tax treatment of distributions can vary greatly between REITs. Some, like Tanger Factory Outlet Centers (SKT) or American Tower Corporation (AMT) might produce almost exclusively ordinary income. On the other end of the spectrum, the timber REIT Weyerhauser (WY) distributes 100% capital gains due to the unique tax situation regarding timber sales. The renewable energy infrastructure REIT Hannon Armstrong Sustainable Infrastructure Capital (HASI) distributes 100% return of capital due to massive depreciation costs. Due to the different types of taxable income, distributions from REITs can have drastically different effective tax rates.

What is the Effective Tax Rate for REIT Distributions?

This is a question with many answers because the effective tax rate varies with a number of factors. For simplicity, in constructing this table, I have excluded tax brackets higher than 32% and made the following assumptions:

Under these conditions, the effective tax rate for 2018 distributions would be as follows: 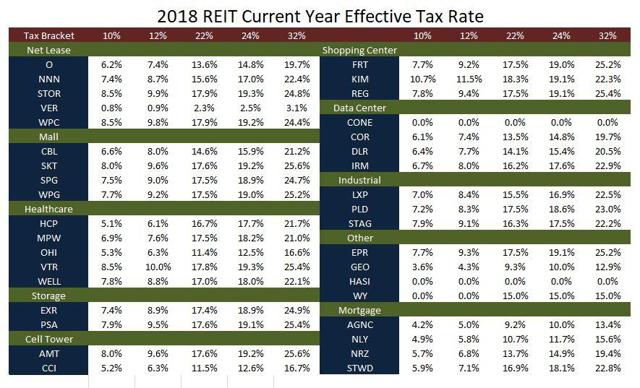 However, in the long term, taxes must also be paid on Return of Capital, either when the position is sold or when cost basis reaches zero. Assuming tax law does not change in the future (and that the position is sold at or above the original cost basis), RoC would be taxed as long term capital gains (0% or 15% depending on tax bracket), making the effective tax rate as follows:

What, then, is the best way to compare REITs to determine if they are worth holding in a taxable account? All else being equal, I believe the after-tax yield is the best indicator. To facilitate the calculation of this, I have determined a number which I will call the Equivalent Qualified Yield Ratio (EQYR). This is the number that, when multiplied with a REIT’s current yield, will result in the yield required from a regular corporation (paying qualified dividends) in order to achieve an identical after-tax yield. 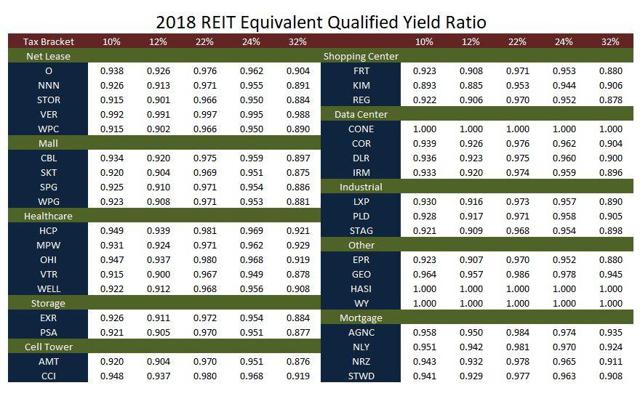 For example, an investor in the 32% tax bracket is considering buying Realty Income (O). The current yield is 3.88% and the EQYR for this tax bracket is 0.904. This means that the distribution from Realty Income would produce an after tax yield equivalent to a company yielding 3.88% x 0.904 = 3.51% in qualified dividends.

You may notice that the EQYR is most dependent on the tax bracket, with the highest numbers (most tax efficient) occurring in the 22% tax bracket. This is due to the fact that the 20% Section 199A deduction brings the effective tax rate down to only 17.6% (22% x 0.8) even if all of the distribution was ordinary income. This compares very favorably to the 15% tax rate for qualified dividends.

On the other hand, investors in the 10% and 12% brackets get the short end of the stick because they are stuck paying taxes on ordinary income compared to a 0% rate on qualified dividends, and thus their EQYRs are lower.

The tax treatment of REIT distributions can and does change from year to year. Below is a table with the historical EQYRs (22% bracket) for the past 5 years. Note that for consistency, this was calculated as if the Section 199A deduction was available in all 5 years, even though it is only applicable to distributions starting in 2018. 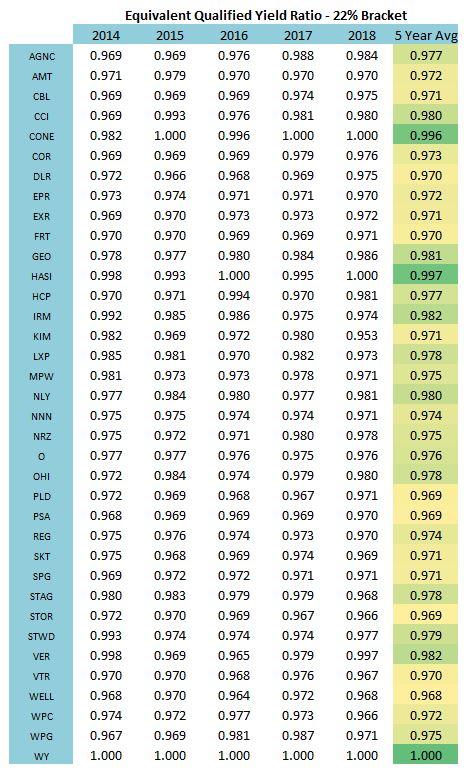 For most REITs, the year to year breakdown of the distribution remains fairly steady, but there are exceptions. For example, Kimco Realty (KIM) spent sold a large number of properties in 2018 in order to shift its portfolio towards higher quality tenants, and as a result approximately 27% of its distribution was Section 1250 gains, taxed at 25%, bringing its EQYR down for the year.

On a scale of overall tax efficiency, REITs fall somewhere between stocks paying qualified dividends and bonds paying interest taxed as ordinary income. Of course, returns will be higher if held in tax advantaged accounts. But, such accounts might have limited investment options or the limit on contributions is lower than the desired allocation to REITs. Other sources of ordinary income may have higher priority for tax advantaged accounts. For many, the difference may be small enough to be negligible – for an investor in the 22% bracket the difference between a 5% yielding REIT and a 5% yielding company paying qualified dividends in a taxable account is approximately 15 basis points in after tax yield. This can be mitigated by choosing appropriate entry points or choosing REITs which have historically paid out larger amounts of capital gains distributions or return of capital.

To conclude, the tax efficiency of REITs is highly dependent on your individual tax bracket and the tax treatment of the distributions. In many cases, REIT distributions are competitive with qualified dividends, even in taxable accounts.

If you are interested in examining the data and accompanying calculations, an Excel file is attached here: REIT_Tax_Efficiency.xlsx.

Disclosure: I am/we are long O, VER, KIM, VTR, NLY. I wrote this article myself, and it expresses my own opinions. I am not receiving compensation for it (other than from Seeking Alpha). I have no business relationship with any company whose stock is mentioned in this article.

Follow Justin Law and get email alerts
+
Add a comment
Disagree with this article? Submit your own.
To report a factual error in this article, click here.
Your feedback matters to us!