After huge gains across the board in January, the stock market saw much more moderate gains in February. REITs stayed in positive territory (+0.44%) but fell short of the broader market as the S&P 500 (+2.97%), NASDAQ (+3.44%), and Dow Jones (+3.67%) continued their strong 2019 rally. Although the market cap weighted Vanguard Real Estate ETF (VNQ) outperformed the REIT sector in February (+0.70% vs. +0.44%), it has thus far come up more than 200 basis points short of the REIT sector year to date (12.63% vs. 14.78%) due to the tremendous underperformance of large-cap REITs. This underperformance demonstrates the risk of purchasing a cap-weighted ETF, which buys REITs based on market cap without consideration for fundamentals, rather than selecting individual REITs that are more attractively priced and offer greater upside potential. In this monthly publication, I will provide REIT data on numerous metrics to help readers identify which property types and individual securities currently offer the best opportunities to achieve their investment goals. 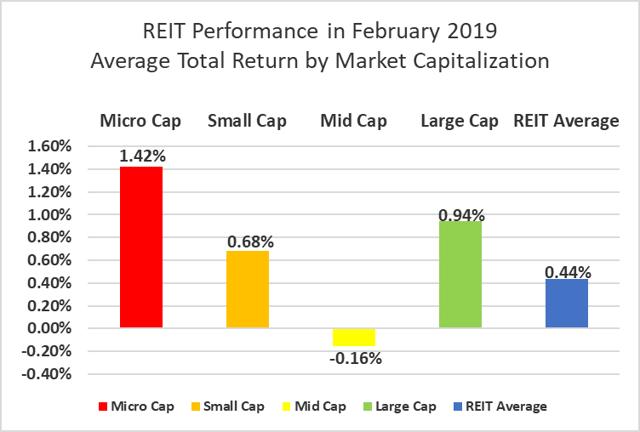 Although REIT market cap and total return were uncorrelated in February, there remains a strong negative correlation year to date. After underperforming their larger peers during each of the last 4 months of 2018, micro-cap REITs have led in the first 2 months of 2019. Mid-cap REITs averaged a negative return in February, but still remain ahead of large cap REITs thus far in 2019. 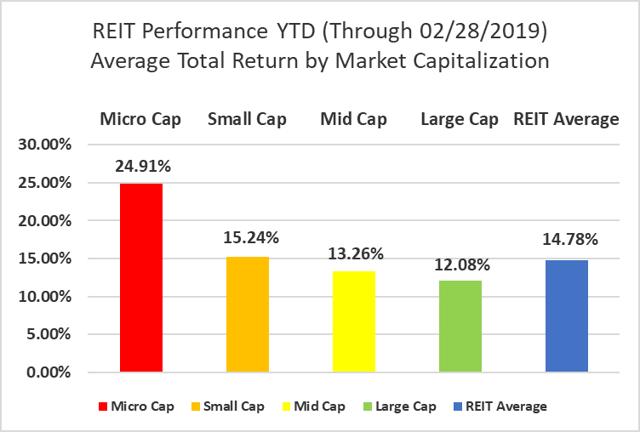 60% of REIT property types averaged a positive total return in February, with a 13.53% total return spread between the best and worst performing property types. Advertising (+6.17%) had the best average performance, led by OUTFRONT Media (OUT) with an 8.14% return. Infrastructure (-7.36%) had the weakest average performance, dragged down by the 51.58% share price drop of Uniti Group (UNIT) in the wake of the bankruptcy of its largest tenant. 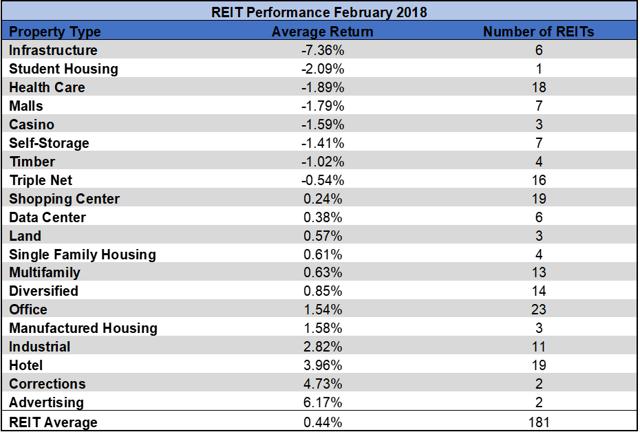 56.35% of REIT securities yielded positive returns in February, with 97.79% in the black year to date. Although 40% of property types averaged a negative return in February, all still remain in positive territory YTD. Infrastructure REITs (+1.37%) and Self-Storage REITs (+5.63%) are greatly underperforming the REIT sector as a whole (+14.78%). In February, Industrial REITs (+20.65%) overtook Shopping Center REITs (+20.41%) as the best performers thus far in 2019. 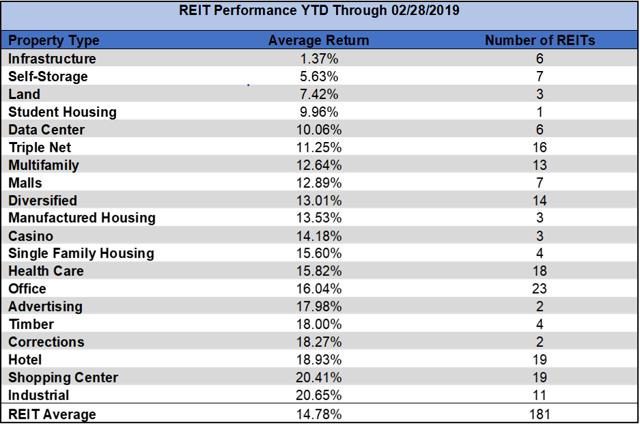 The REIT sector as a whole saw the average P/FFO (2019) increase from 14.7x to 15.1x during February. The average FFO multiples rose for 70% of property types, fell for 25%, and remained flat for 5%. Manufactured Housing (22x) continues to trade at the highest average multiple, and Malls (9.2x) continues to trade at the lowest average multiple. After a strong February, Corrections (10.2x) no longer trades at a single-digit multiple, but still remains discounted relative to most other property types. 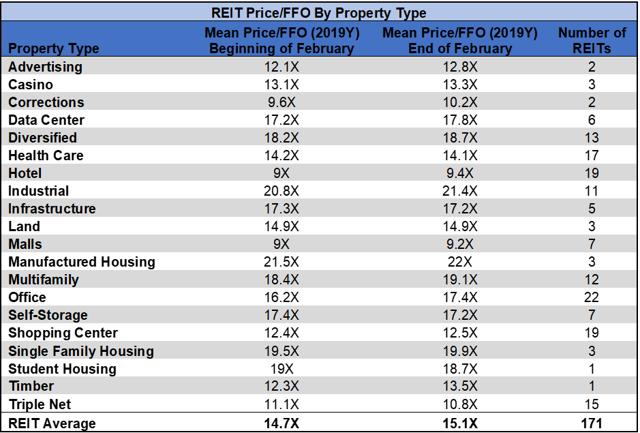 Uniti Group, a communications infrastructure REIT specializing in fiber and wireless towers, plummeted in February with a -51.58% share price decline. The initial sharp decline began after market on February 15th due to an adverse court ruling against Windstream Services, the wholly-owned subsidiary of Windstream Holdings (OTCPK:WINMQ), which is the largest tenant of Uniti Group. UNIT continued to decline in the aftermath as the court ruling pushed Windstream Holdings into Chapter 11 bankruptcy. Windstream quickly secured $1B of debtor-in-possession financing from Citigroup Global Markets that can be used for paying Aurelius Capital Management (the victor in the case against Windstream) the more than $300M sum ordered by the judge in his court ruling. Additionally, this will allow Windstream to continue business as usual, with normal operations and continued payment of all vendors.

However, much remains uncertain as Windstream has not definitively accepted or rejected the master lease with Uniti, and it is not yet clear in which ways Windstream will be restructured in bankruptcy. Uniti’s earnings were originally scheduled for release on 02/28, but due to the uncertainty revolving around Windstream, the earnings have been delayed to a future date no later than March 18th. Although there is a good chance that Windstream will affirm the master lease with Uniti and emerge from bankruptcy a less indebted and stronger tenant, this extended uncertainty has led Uniti’s share price down into single digits. UNIT will likely experience elevated share price volatility throughout 2019.

Innovative Industrial Properties (IIPR), an industrial REIT that leases space to marijuana companies at a high rent per square foot, was the best performing REIT in February with a return of 27.57%. IIPR saw strong share price appreciation on the news that it was being added to the SmallCap 600 on February 21st. Paired with a strong January, IIPR is now up 74% over just the first 2 months of 2019. 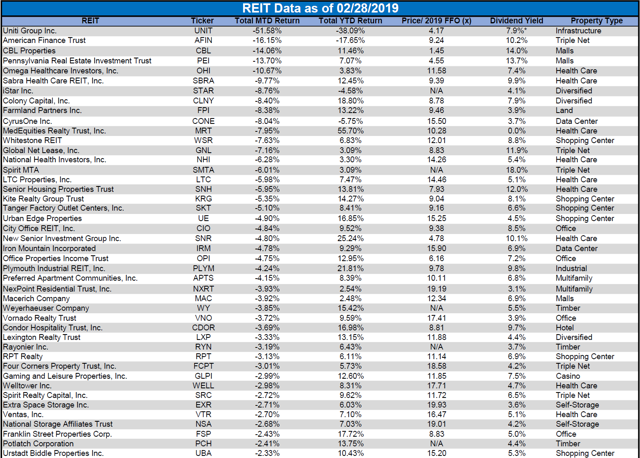 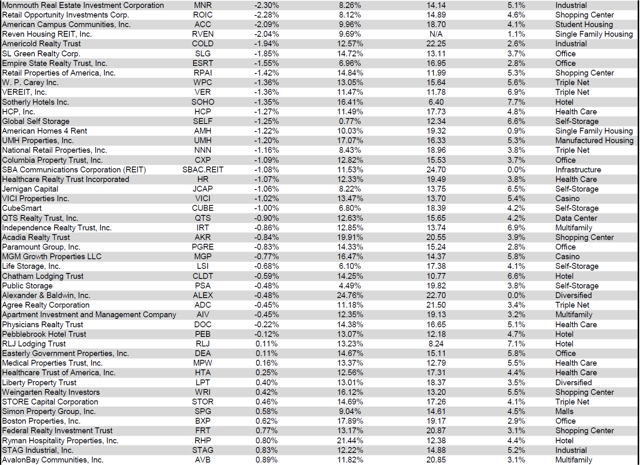 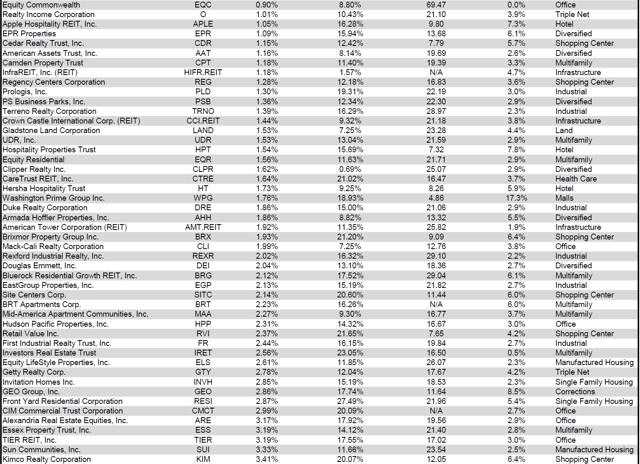 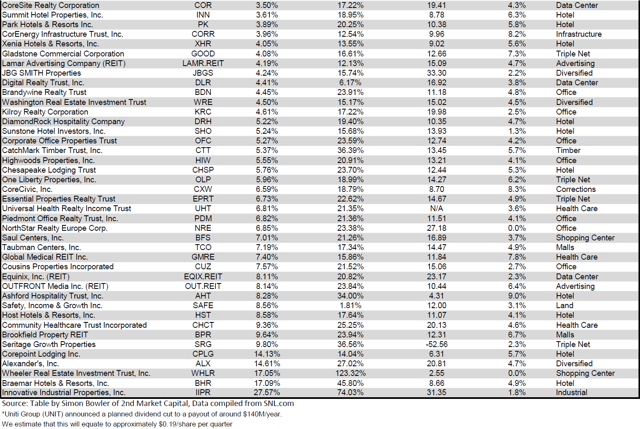 Dividend yield is an important component of a REIT's total return. The particularly high dividend yields of the REIT sector are, for many investors, the primary reason for investment in this sector. As many REITs are currently trading at share prices well below their NAV, yields are currently quite high for many REITs within the sector. Although a particularly high yield for a REIT may sometimes reflect a disproportionately high risk, there exist opportunities in some cases to capitalize on dividend yields that are sufficiently attractive to justify the underlying risks of the investment. I have included below a table ranking equity REITs from highest dividend yield (as of 2/28/2019) to lowest dividend yield. 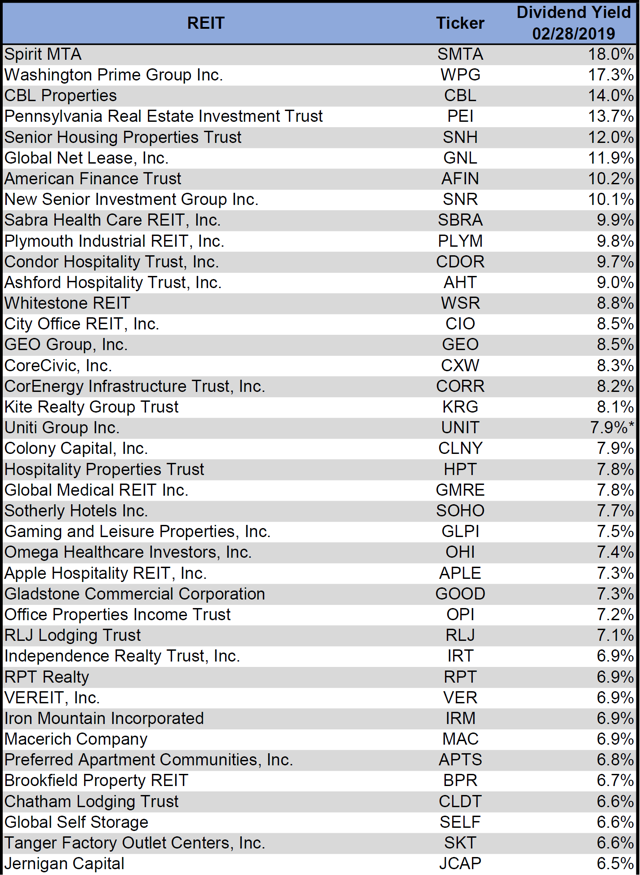 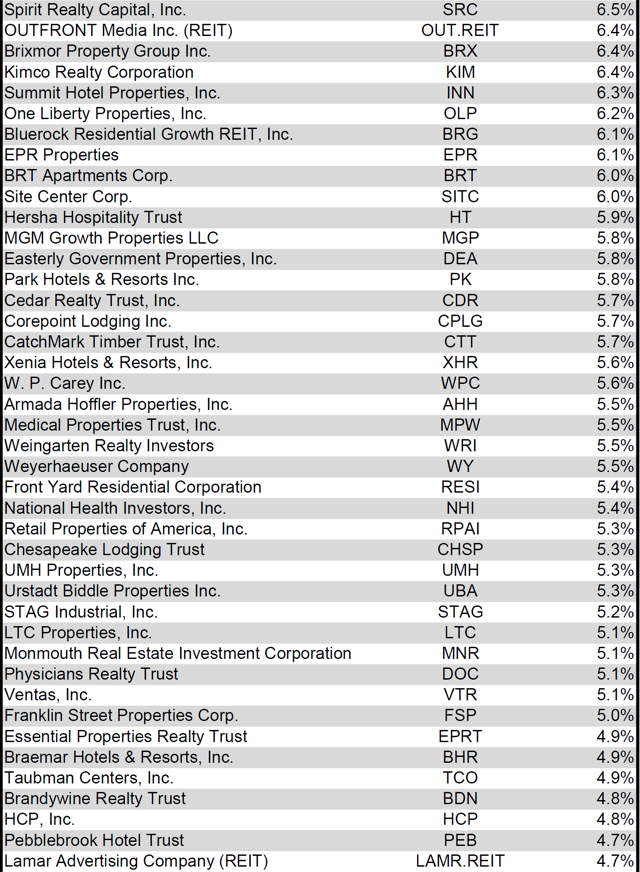 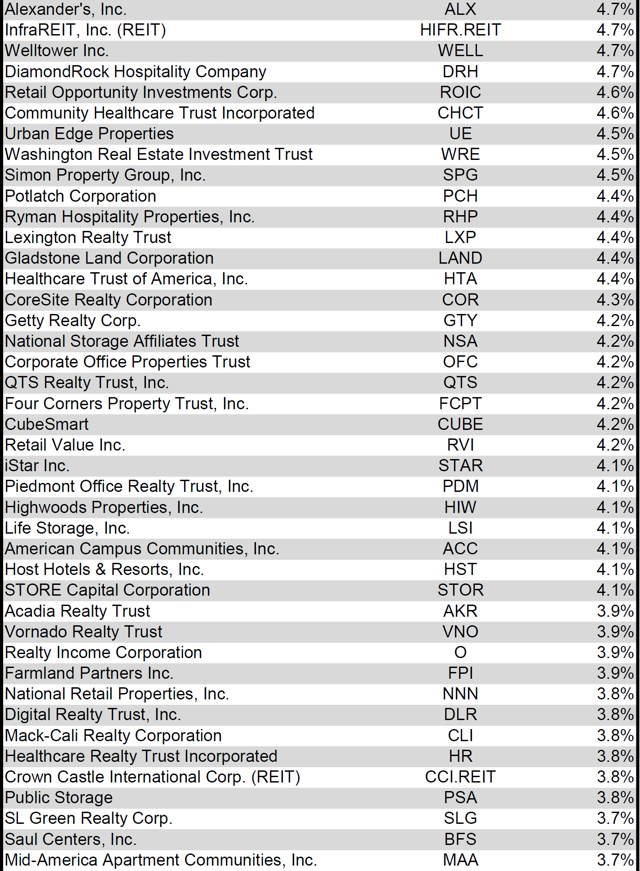 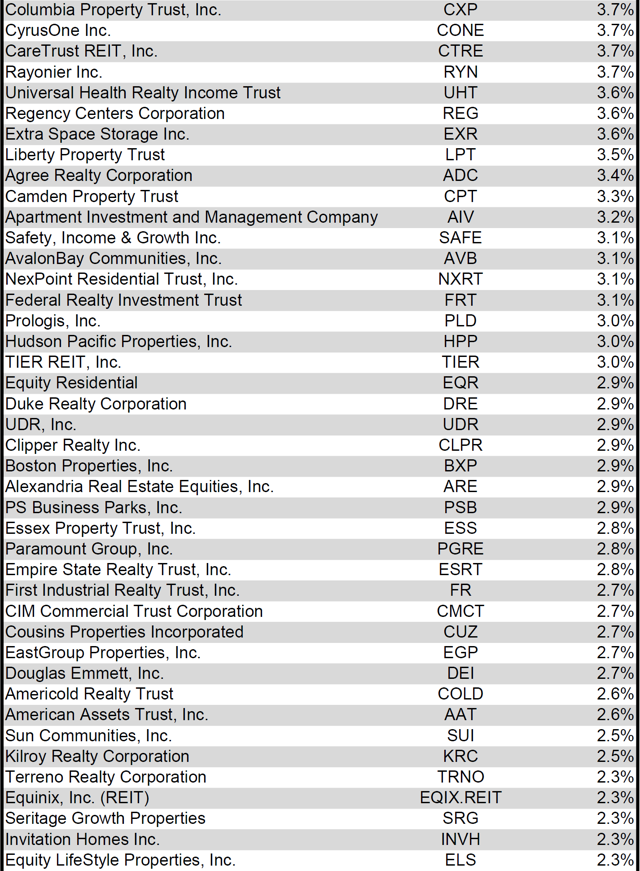 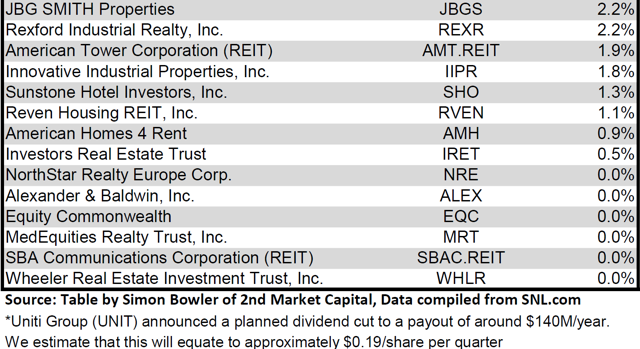 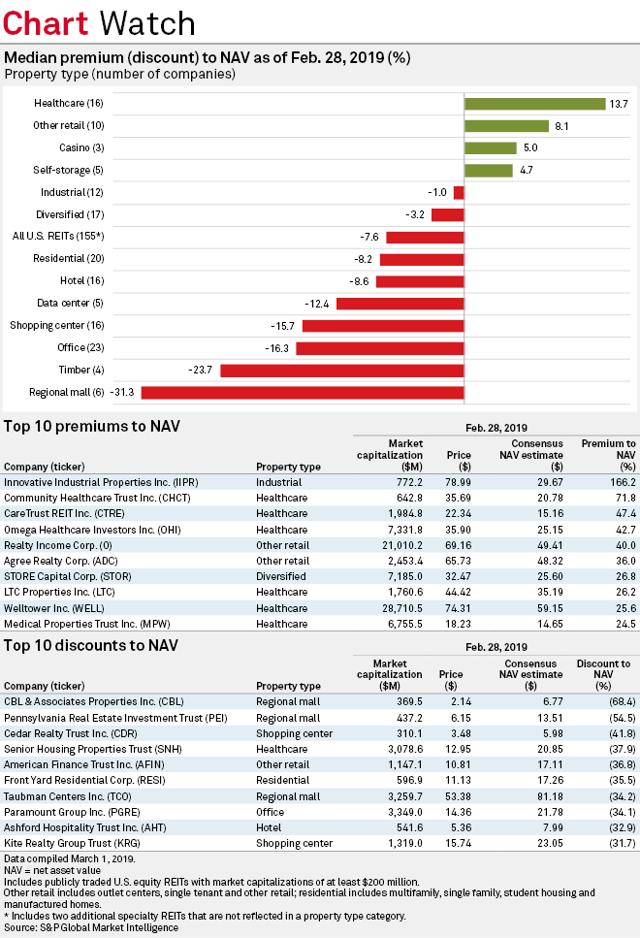 Although 9 of the 10 REITs trading at the largest premiums to NAV are Triple Net or Healthcare REITs, it should not be assumed that these property types are too expensive or no longer present opportunities. Even among Healthcare REITs, which are mostly priced at large premiums to NAV, there remain attractively priced and well-managed REITs such as Global Medical REIT (GMRE), which trades at a 3.7% discount to NAV and an FFO/share multiple of only 11.8x.

Another example is American Finance Trust (AFIN), a Triple Net REIT that listed on NASDAQ in July 2018, which is trading at the 5th largest NAV discount (-36.8%) of all equity REITs. After listing at $15, AFIN has fallen 28% and now has a dividend yield in excess of 10%. One of the primary reasons for the recent share price decline was the announcement that after the BB&T (BBT)/SunTrust (STI) merger, some of the banks that are within close proximity of each other will be closed. AFIN has more exposure to SunTrust than any other REIT, so investors initially reacted with concern. However, as revealed on the 4Q 2018 earnings call, AFIN is actually well-protected from such closures due to the structure of their SunTrust leases, which all have at least 10 years remaining and would continue to be paid even if the leased bank is closed. As a result, it is unlikely that these banks will be selected for closure and some of the non-AFIN banks in the same markets may be closed instead. Although AFIN trades at only a 9.2x FFO multiple, it is not even the most attractively priced Triple Net REIT. Global Net Lease (GNL), which much like AFIN has a double-digit yield and pays monthly, only trades at an 8.8x multiple.

Due to a big outperformance in 2018, large caps REITs entered 2019 at significantly less attractive prices than their smaller peers. As can be seen in the table above, small cap and micro-cap REITs remain very attractively priced and are well-positioned to continue to outperform large cap REITs throughout the remainder of 2019. Market cap weighted REIT ETFs are underperforming in 2019 largely because they are overweight last year’s winners and underweight the oversold REITs that are poised to outperform this year. By carefully analyzing REIT data and industry trends, active investors have the opportunity to outperform ETFs.

Disclosure: I am/we are long UNIT, AFIN, GNL, GMRE. I wrote this article myself, and it expresses my own opinions. I am not receiving compensation for it (other than from Seeking Alpha). I have no business relationship with any company whose stock is mentioned in this article.

Additional disclosure: 2nd Market Capital and its affiliated accounts are long UNIT, AFIN, GNL & GMRE. I am personally long UNIT, GNL and GMRE. This article is provided for informational purposes only. It is not a recommendation to buy or sell any security and is strictly the opinion of the writer. Information contained in this article is impersonal and not tailored to the investment needs of any particular person. It does not constitute a recommendation that any particular security or strategy is suitable for a specific person. Investing in publicly held securities is speculative and involves risk, including the possible loss of principal. The reader must determine whether any investment is suitable and accepts responsibility for their investment decisions. Simon Bowler is an investment advisor representative of 2MCAC, a Wisconsin registered investment advisor. Positive comments made by others should not be construed as an endorsement of the writer's abilities as an investment advisor representative. Commentary may contain forward looking statements which are by definition uncertain. Actual results may differ materially from our forecasts or estimations, and 2MCAC and its affiliates cannot be held liable for the use of and reliance upon the opinions, estimates, forecasts and findings in this article. Although the statements of fact and data in this report have been obtained from sources believed to be reliable, 2MCAC does not guarantee their accuracy and assumes no liability or responsibility for any omissions/errors.