Splunk (NASDAQ:SPLK) Inc is a cutting edge firm in the field of machine data. Splunk’s integrated artificial intelligence enables the users to automatically detect anomalies, predict future outcomes and sift through the noise, saving companies the time and cost to install and maintain expensive data infrastructures and enabling them to focus on more important things- like making critical business decisions. Consider the example of TrueCar- a platform for retrieving automotive pricing and related information, the firm needed a solution to scale and support its cross-functional searching and reporting to manage its complex IT environment, so it brought in Splunk. As a result, TrueCar instantly had all their real-time insights in one place which accelerated its software and product development and helped improve its security insights and threat detection. Splunk went public in 2013 and consistently produced superb results since. The stock has very recently taken a pullback and offers a beautiful entry opportunity at $122. 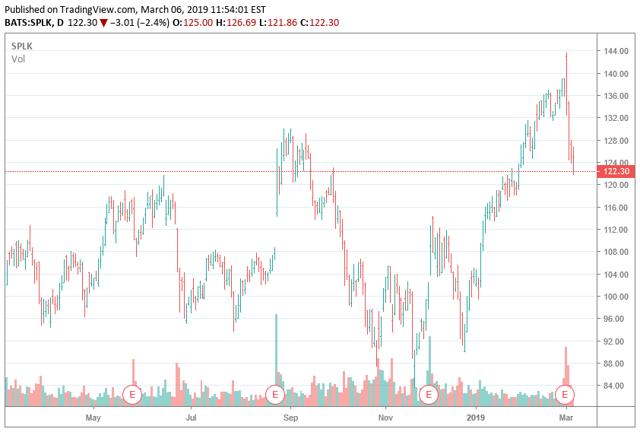 Splunk offers four levels of service, starting from a free to a light version, an enterprise version, and a cloud version. Splunk can literally collect and index any machine data, search and analyze in real time and offers Mission-critical performance, scale and reliability. The main difference between the enterprise and the cloud version is that the latter offers dynamic data management. Users are particularly very much impressed is its improved mobile and natural language processing capabilities where the company is opening the aperture to a larger number of business users. Splunk’s platform manages complexity and chaos efficiently in an ever-changing data landscape that enables the users to find insights from their data without first having to structure that data. Processing unstructured is very important but difficult if you are an engineer you know the hassles. In my line of work, unstructured data is frequent, and the processing used to take huge manpower and technical capabilities, with Splunk, now they can focus more on the qualitative side of data rather than spending a substantial amount of money in scaling data processing platforms. 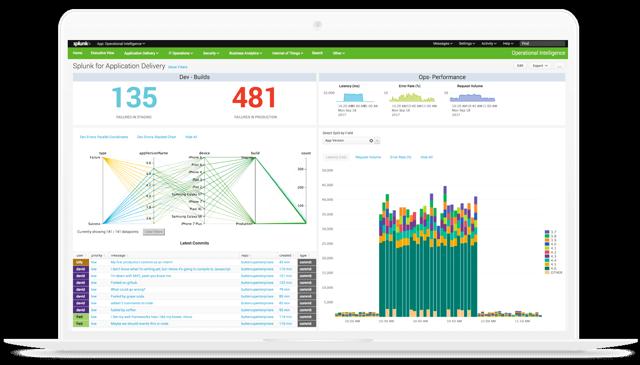 Previously I gave you the example of TrueCars, another example is Splunk’s long term customer Cox Automotive. The company expanded its use of Splunk cloud and ITSI (IT service intelligence) which allowed them to monitor activity across their business units. One of the largest higher education system in the United States, The California Community Colleges also expanded their use of Splunk Enterprise to better act on their data across 115 colleges, this has drastically reduced their manual time spent on IT and security issues while saving both money and time on troubleshooting. On the security step, Splunk is receiving new customers. The World Wildlife Fund (WWF) is a new Splunk Cloud and Enterprise customer who uses the platform to protect itself from risk. They leverage Splunk in the U.S. and 12 different countries to manage their risk efficiently. Recently, Santos Limited, an Australian oil, and gas producer have also purchased Splunk Cloud to expand its real-time visibility across their security operations.

Not profitable yet but it might be close enough

Splunk is not profitable yet, the reason is its sales and marketing costs. But bear with me because Splunk’s revenue outlook of $2.2 billion for fiscal 2020 reflects its increasing confidence in the opportunity and could become profitable in the next two years if it achieves guidance. Nonetheless, Splunk has posted three consecutive earnings surprises on a quarterly basis, and four consecutive earnings surprises on a yearly basis and the surprises are not merely marginal. These are noticeable differences against consensus estimates and the results stem from the fact that Splunk has a highly efficient platform that is enterprise-level functional and at a fraction of cost.

I am not surprised at all to see a majority of the strong buy recommendations in the market. Technical people knew way earlier that Splunk had to tend high because they know the engine, they know the product. Analysts are just catching it recently as earnings beats have become regular for Splunk.

Enterprises are still in the early steps in using centralized data infrastructures. Many of the enterprises are still focused on traditional ways of managing data, most of which focuses on structured, quantitative data. But, with the rise of sophisticated data infrastructure developers many enterprises are now more serious about managing and analyzing customer and competitive data. IBM is the largest player in this field beside Splunk. Because the market in which Splunk operates is still very much fragmented and many competitors are small and privately owned, a straight forward competitive position cannot be estimated.

Below is a table that shows market share about Splunk’s enterprise security based on a number of websites that use it. But this is a very conservative estimate because this only focuses on the security suite not the total suite and secondly, not all enterprises disclose what platform they use.

Among these competitors, only IBM and Rapid 7 are publicly listed. Although data shows that Rapid 7 has a larger market share (based on number of websites) it has a very small revenue ($244.09 million last year) compared to Splunk. If you take a look at Splunk’s revenue chart, it is clear that Splunk is the dominant player here, sales have been grown at an explosive rate. Profitability is negative for both the companies because of mostly substantial marketing and selling costs. With the rollout of 5G and IoT adaption going up enterprises will be keen to have complete analytical control of their unstructured data. Unstructured data analysis remains one of the key challenges in modern data analysis world because it is complex but extremely insightful, Splunk is filling a largely unfilled high potential space and have been very successful as showed by its performance over the years. 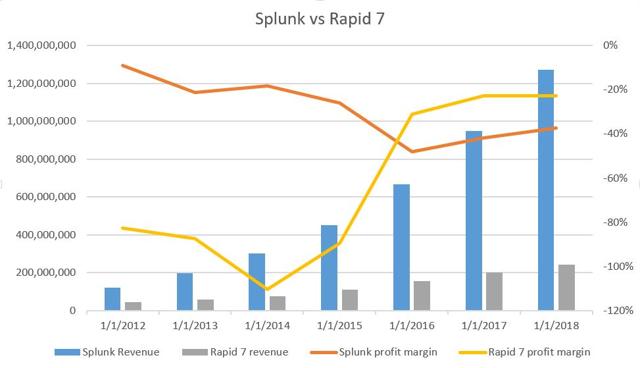 Although Splunk had traded at large premiums it has gotten cheaper over the years. The core reasons behind these includes its negative profitability which brought down the amount of price investors are willing to pay for each unit of sales. But investors were not pricing in the growth potential in sales Splunk’s continues to enjoy a high penetration rate in the enterprise market. But very recently investors may have started to realize its growth trajectory because p/s ratio has tended to go slightly upwards, this may be the time for you to lock a position in this high growth stock. 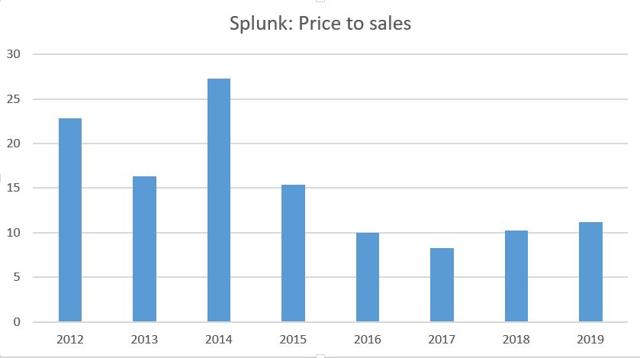 Splunk’s revenue outlook for 2020 is $2.2 billion, which was updated from the previously guided level of $2.15 billion. This shows that the management is confident and Splunk continues to enjoy its market expansion. Very recently there was a sell-off that followed RSA cybersecurity conference announcements from Alphabet with its new Backstory product and Microsoft with its new Azure-based security tool. But none of these products have any direct threat because Splunk addresses the data management infrastructure as a whole and not just the security side. If Splunk had a core focus on cybersecurity then the sell-off would have been justified, so now there is a nice entry opportunity. 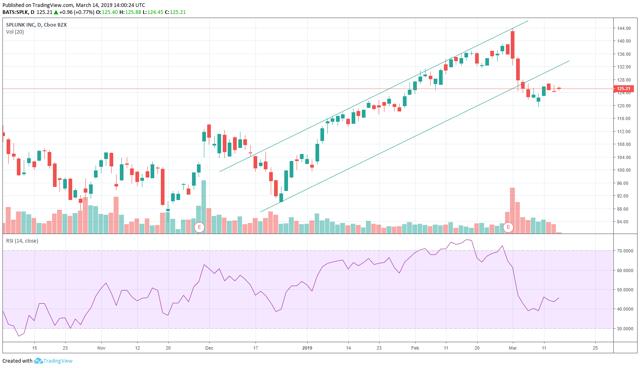 “Wedbush says this week's Splunk (NASDAQ:SPLK) 9% selloff was "overdone" and pushed the company to attractive levels. The selloff followed RSA cybersecurity conference announcements from Alphabet with its new Backstory product and Microsoft with its new Azure-based security tool. Wedbush analyst Steve Koenig says neither product is expected to pose a significant threat to Splunk.”

Splunk’s revised guidance implies a 22% increase on a yearly basis which could significantly boost the stock price throughout this year. Because Splunk has consecutively beaten four quarterly consensus estimates, investors have faith on Splunk’s guidance and wouldn’t delay to increase their position size. As a result, the supply-demand economics will naturally drive the price up. From a technical analysis perspective, the stock looks oversold too, as shown by RSI. All these factors mean that that the short term dip has come off as a blessing and offers an attractive opportunity to move forward with the trend. Investors tend to overreact even in cases of marginal increase in sales, and as Splunk reaches towards achieving its guidance through the next four quarters you will likely see its price to sales ratio trending at levels near 14-15x. Let’s not forget that Splunk’s guidance reflects its continued market capture in its industry and high confidence in the management, so the trend is likely to continue through this year.

There are a number of risks involved with Splunk Historically the firm has generated a majority of its revenues from perpetual license agreements, whereby it generally recognizes the license fee portion of the arrangement upfront, assuming all revenue recognition criteria are satisfied. Right now the firm is transitioning its present business model to shift from perpetual license sales in favor of term license sales and agreements for its cloud services. Splunk cannot predict the ratio of orders with revenues that will be recognized upfront and those with revenues that will be recognized ratably it will enter into during the quarter. Generally, term licenses and cloud services agreements have shorter contract duration than perpetual licenses, and the shift away from perpetual license sales could cause fluctuations in Splunk’s results. Another significant risk is Splunk’s long sales cycle. The length of its sales cycle, from initial evaluation to delivery and payment for the software license varies substantially from customer to customer. Moreover, if customers wish to avail a combination of its multiple offerings, it will further slow down its sales cycle. One of the most important things to Splunk is its intellectual property rights. In today’s world, it is really difficult to protect IPs. Firms are now aggressively prototyping competitors’ products and slightly changing the interfaces and engines and branding them under their names. The loss in IP rights could substantially harm Splunk.

Splunk has an admirable product in the enterprise market. Firms love to use Splunk to leverage its highly analytical but easy-to-use solutions. The system is robust, highly scalable and very fast. It can process virtually all machine data and gather valuable insights. Whether you want to gather predictive or risk analytics, Splunk can get it done for you. If you were to build a similar system from it would strain your core operations (assuming that is not your main business), now you can focus more on the qualitative sides of your business while letting Splunk handle the technicalities. However, there are multiple risks involved and you should only invest if you have a growth orientation and a higher risk tolerance.

Technology Dive
62 Followers
I have deep interest in financial markets and I am a self taught investor. My main strength lies in my ability to analyze a firm and make effective conclusions.

Disclosure: I am/we are long SPLK. I wrote this article myself, and it expresses my own opinions. I am not receiving compensation for it (other than from Seeking Alpha). I have no business relationship with any company whose stock is mentioned in this article.