When the Fed reverts to QE and the dollar tanks, gold and everything else will soar.

The latest positioning data was as of March 5 when gold closed at the low of 1,285.

The big picture remains the same: When the Fed reverts to QE and the dollar tanks, gold and everything else will soar. I believe a return to QE is inevitable at this point.

If the stock market dump in the 4th quarter has taught us anything, it is that the markets cannot survive without the ever-increasing stimulus, just like any Ponzi scheme. Meanwhile, U.S. deficits and debt continue to soar, with unfunded liabilities about to hit en masse next year. At the same time, economic activity and tax receipts are falling. This means more and more treasury bonds are being issued when the Fed is still reducing its balance sheet and foreign buyers have gone on strike. There is only so much the domestic market can soak up before becoming saturated, forcing yields to rise and debt interest costs to explode. The Fed will be forced to revert to QE to prop up stocks and bonds (keep yields down) and will sacrifice the dollar in the process.

Looking at gold in the short term, starting from a technical perspective…

I am not saying this is going to happen, but it is a risk should those moving averages break. 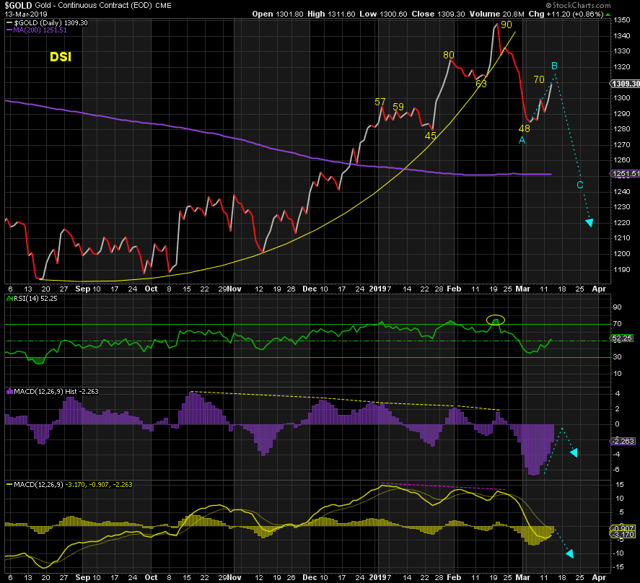 The weekly chart shows that although the price has been rising from its recent intraday low of 1281, the MACD Histogram continues to fall, which supports my primary thesis for a further drop in gold next to the support zone at 1,241 to 1,252. 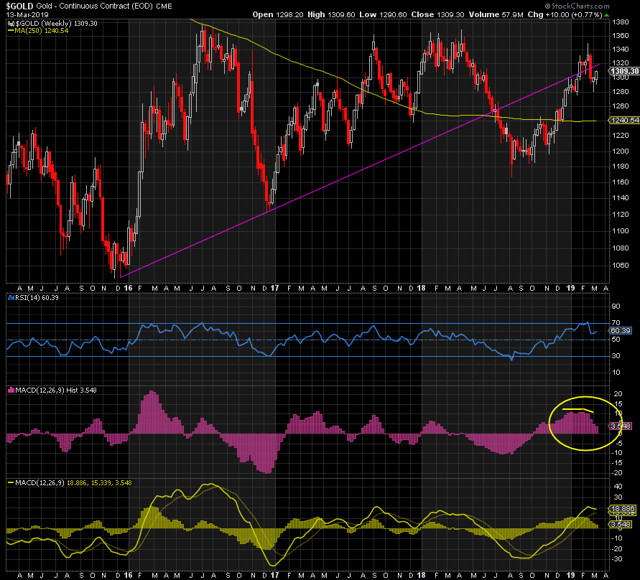 The Daily Sentiment Index, or DSI, hit 90% the day gold peaked at 1,350 on February 20th. It fell 39 points in just ten days to 51, where it closed at its low of 1,285 on March 5th. Consider this drop Wave A. Since then, it has risen 20 points back up to 70% yesterday or the peak of Wave B. If this is an ABC move lower, expect to see gold fall to at least the teens next before it finds a definitive low.

The 21-day moving average has already turned down from a lower high and has a long way to fall from here. 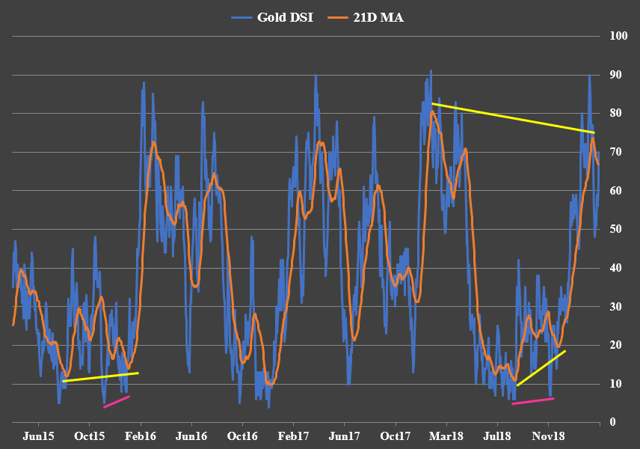 The latest positioning data was as of March 5 when gold closed at the low of 1,285. Open interest was 471k contracts. Money Managers or "Funds" were net long just 31k contracts. Commercials were net short 114k contracts, relatively low by historical standards. Other Reportables and Small Specs made up the difference. 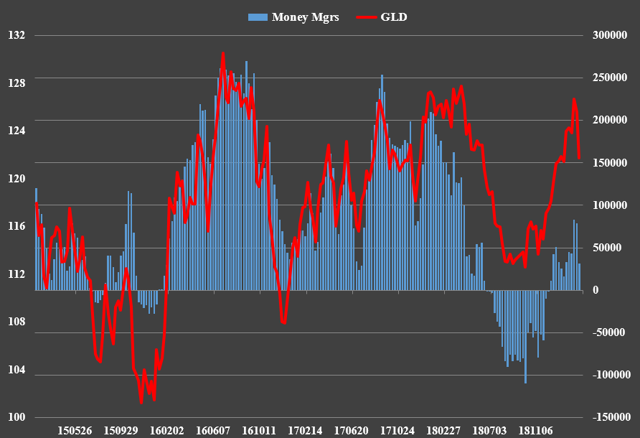 Since then, the price has risen to 1,312, just $27. But open interest soared to 530k contracts yesterday. This equates to a delta of 59k contracts in just one week, a 12.5% increase, for a price change of $27, or just over 2%. To put this in perspective for you, in the last twenty years or 1,040 weeks, the 1-week delta has only been higher on three occasions: 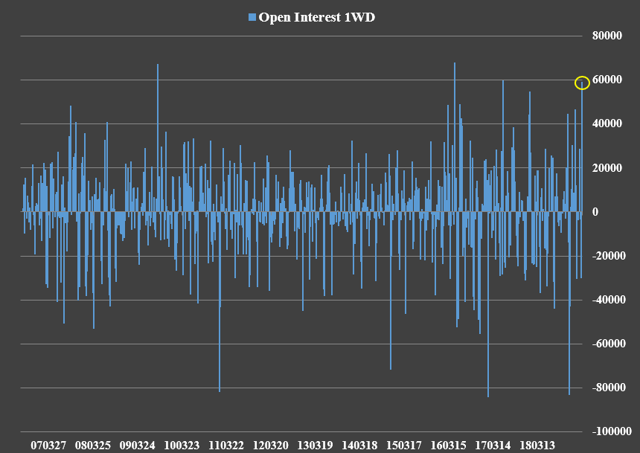 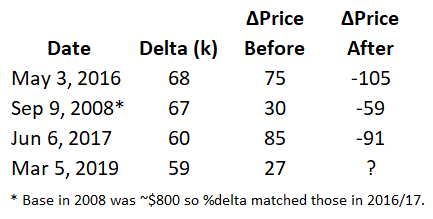 Now, I don't want to get into a whole discussion about the manipulation of the metals market, but this is downright obvious. There is no justification for such a massive increase in open interest, especially after such a tiny move up and with funds holding a relatively small long position, other than the Bullion Banks are loading up on the short side to prevent gold going higher and planning to make a sizeable profit in the process, as always.

The bad news is that this likely means that we are going lower, perhaps up to $100 lower.

The Banks are clearly going to attempt to squeeze almost everyone out of the market before the massive rally to come, in my opinion. The good news is that in each of the prior cases this has occurred, most notably 2008, the price rebounded to new highs after the sell-off. This could be the last buy-the-dip opportunity we get, courtesy of the Bullion Banks.

Follow Sprott Money and get email alerts
+
Add a comment
Disagree with this article? Submit your own.
To report a factual error in this article, click here.
Your feedback matters to us!