I've been publishing on the yield curve since November, and in that time, the curve has undergone some changes. 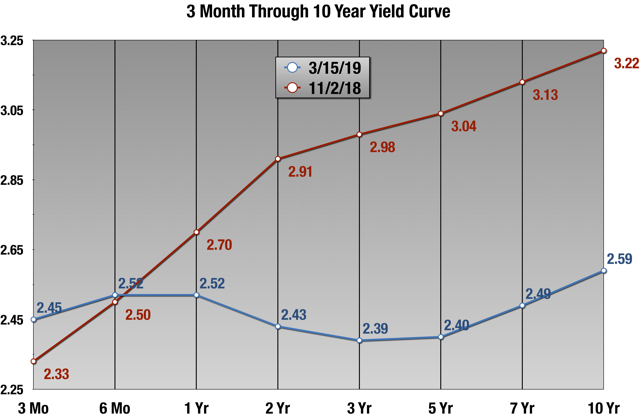 For some time, the most obvious feature of the curve was the 2-Year Elbow, seen here at 2.91% on the red line from November. The curve had that basic shape for most of 2018, until the very end. Then the 2-5 inverted, then the 1-Year Spike formed, and now we see that the 6-12 Month Mesa has formed, with those two rates flat and inverted all the way to the 7-Year. Currently, the 6-Month to 5-Year spread is -12 bps. I don't need to fit a line to show you how much the curve has flattened - just eyeball it. Eek.

You can watch the changes here:

Let's get a little zoomed in on Friday's close: 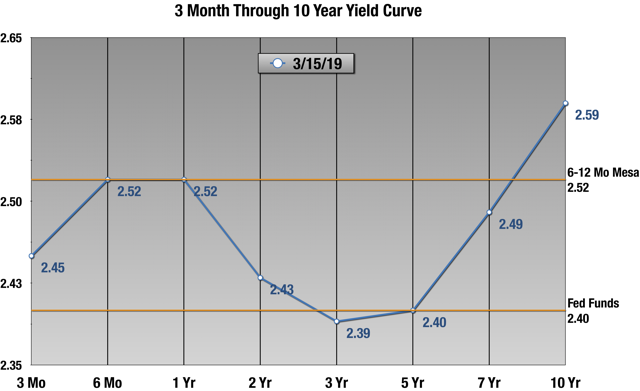 While the much-declined 10-Year is holding up, the Mesa is inverted through the 7-Year. The 3-Year and 5-Year are flat or inverted with the effective Fed Funds rate. Double eek.

So What Does It Mean?

The obvious explanation is that market participants are anticipating Fed tightening or standing pat through the next 6-12, and then easing thereafter. This aligns with many predictions, including my own, of a US recession coming at the end of this year or the beginning of next.

So Why Should You Care?

The inversion of the 2-10 yield curve has preceded the previous 6 recessions by 6-24 months, usually closer to 6 months. To be clear, this is a symptom, not the cause of recessions, but it seems to be one of the more reliable predictive variables in this respect. The trend has been for a 2-10 inversion in late Q2 or Q3 for some time now.

I've been maintaining a simple daily regression model of the yield curve since early 2018, focused primarily on the 2-10 spread. The spread peaked on New Year's Eve 2013, and has been declining in a fairly linear fashion since. 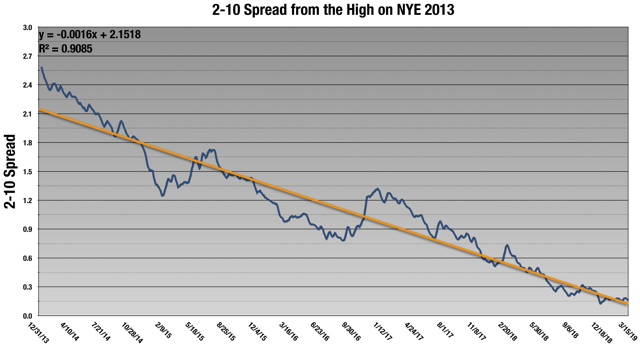 The fit here is very tight with an R2 of over 0.9. The model has been predicting a 0.15-0.16 bps/day drop in the spread since mid-2017. The current model prediction is that the 2-10 spread will flatten on August 6, about a month later than last month's prediction, which as you can see, dipped pretty low during the December swoon. It is currently at about 6 weeks later that the median model prediction of June 21. 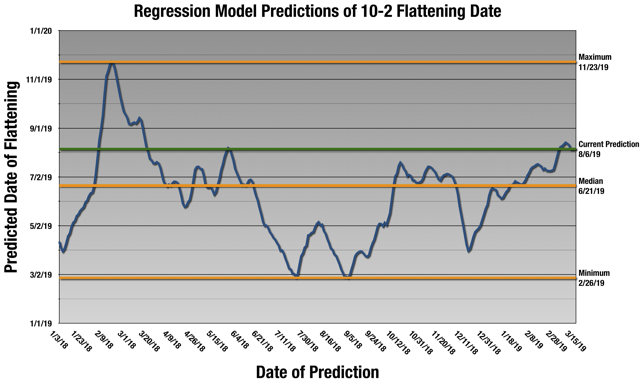 I use a 7-day moving average, which is fairly sensitive to these short term movements like we saw in December and January. So the current prediction is for recession at the beginning of 2020 at the earliest, and Q3 2021 at the latest. I think weakness in the rest of the world is going to drag us down throughout the year and it will be closer to the early part of that range.

Including mine. Recessions happen very slowly, then all at once. Recessions are notoriously difficult to call at first, and usually we don't know until a quarter or two after it's already started. For example, in the last go around, then CNBC talking head and current White House Chief Economic Advisor, Larry Kudlow had this to say when we were already in recession in December, 2007:

There is no recession. Despite all the doom and gloom from the economic pessimistas, the resilient U.S economy continues moving ahead 'quarter after quarter, year after year' defying dire forecasts and delivering positive growth. In fact, we are about to enter the seventh consecutive year of the Bush boom…

There's no recession coming. The pessimistas were wrong. It's not going to happen. At a bare minimum, we are looking at Goldilocks 2.0. (And that's a minimum). Goldilocks is alive and well. The Bush boom is alive and well. It's finishing up its sixth consecutive year with more to come. Yes, it's still the greatest story never told.

Oof. But this is not to pick on Kudlow, except for his terrible prose, because many, many people smarter than either of us missed this one too. Expect more of the same this time around. 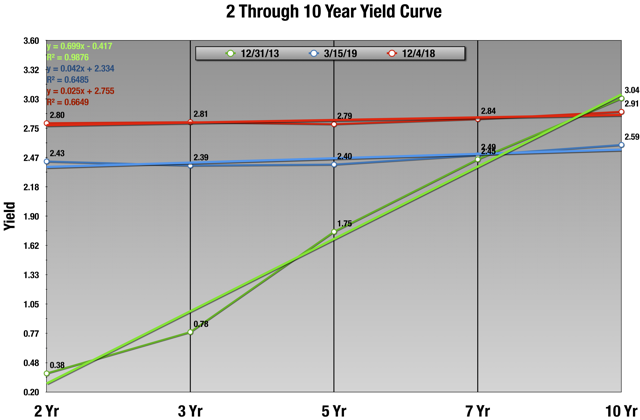 A few things stand out here. Number one is that the 10 year bond has barely budged in 5 years compared to the short end. Look at all the movement on the short end over the last 5 years (green to blue line) but the 10-year is down 45 bps. As we might expect, Fed policy is having much more of an effect on the short end of the curve than the long end where market forces are more in effect. The market says long term rates should remain low.

Another way to look at the chart is the slopes of the lines you see, which are represented by the x-coefficients in the regression equations in the top-left. Positive is normal, slightly positive is flattening, zero is flat and negative is inverted. As you can see, we're getting pretty close to zero there, and we are very close to our flattest day in the sample.

Also, the R2 of the fitted lines tell us that the curve was much more linear as 2013 came to a close than it is today. This is the "normal" situation where time is the only risk factor.

The main conclusion here is that the yield curve continues to flatten and that the action in yield curve spreads is happening primarily at the long end, which are the rates least in the Fed's control.

The New York Fed also has a yield-curve based model for recession. Because they're the Fed, and I'm just me, we should probably have a look, right?

In any event, this next chart from the Fed takes us through the end of February, and we can see that, while the back-testing is OK, it looks a little slow to react to changes in the spread in some recessions, and we can also see some false-positives in the 1990s. 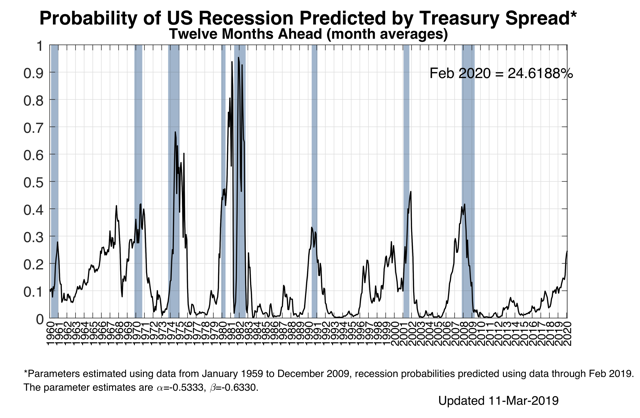 The 3-month to 10-year has been declining rapidly in the last 4 months, going from 89 bps in early November to 24 bps at the end of the year, and 14 bps at the close on Friday. The Fed uses a 3-month moving average, so it is a little slow to react to this sort of fast action.

At the end of February, the Fed model put the probability of recession in February 2020 at around 25%, up 1% from their January 2020 prediction. Let's zoom in on the last few years there, where the probability has spiked considerably. 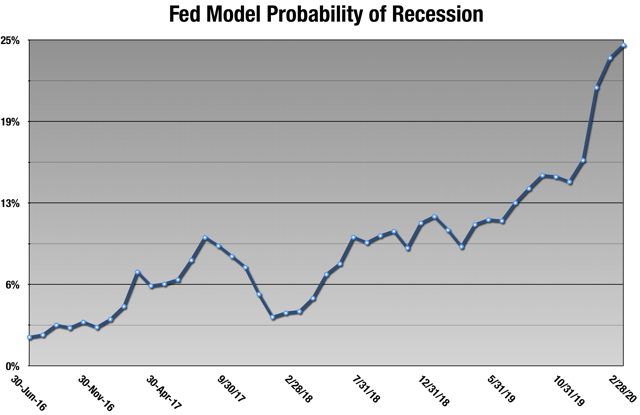 So, you can see that the recent narrowing of the spread has caused the Fed model to start spike in November 2020, one year out from when the sharp drop in the spread began.

This spread can be seen as the price of the implicit risk of lending to the consumers on the most vanilla type of mortgage. A bank has cash and they want to lend it at a 30-year fixed rate. They can lend it to the US Treasury at almost zero risk. Or they can lend it to a homebuyer and get a higher rate, but more risk of default and early repayment. So when the spread is low, banks think these risks are low; when the spread is high, or rising, banks think these risks are increasing.

After a lot of up and down in the early part of the cycle, around 2015 this noisy data set settled into the 100 bps range. Then, at the end of 2017 through the end of Q2 the spread found a new equilibrium in the 150 bps range. But 2019 has been risk-on in the mortgage market, and we will mostly see this on all of the spreads in this section.

In the historical data, the spread rose sharply going into recession, so it will be interesting to see how this progresses as growth slows and we move towards recession, and I will be keeping an eye out for similar movements like H1 2018.

The 10 and 30 year Treasury to corporate debt spreads, which, like the mortgage spread, is going to tell us about the implied risk of lending to the AAA-rated corporations with the best credit. In the full data set, the spreads rises sharply into the last 2 recessions, but not 1991, so it's unclear if there's a strong relationship with recession like the 10-2 spread. Again, after a period of declining risk, investors dove back in during January. The 30-year spread:

As we see, after a period where the implied risk was zero or negative, it jumped, but has now returned to levels from a year ago.

Another window into corporate risk is the BBB-AAA bond spread. BBBs are the lowest level of "investment grade" bonds, which often turn out to be not very investable once recession rolls around. So as bond investors fear recession coming, many BBBs get repriced as junk and the effective yield soars. So where are we at? Again, 2019 has been risk-on.

And the CCC-AAA spread. Even junk is making a comeback in 2019.

I will try and update this article monthly with new data.

Thanks for reading. Comments? Questions? Insults? Have at it.