As Qualcomm (NASDAQ:QCOM) has been sued and fined by just about every important phone manufacturer and regulatory body in the world, the common ending resolution is to determine that the wireless technology giant isn't actually a monopoly and to leave their licensing program virtually intact. The main outstanding regulatory issue is Apple (AAPL) and the Federal Trade Commission lawsuit, but Qualcomm still appears on the path to achieving targeted EPS goals backing up our bullish investment thesis with the stock around $55. 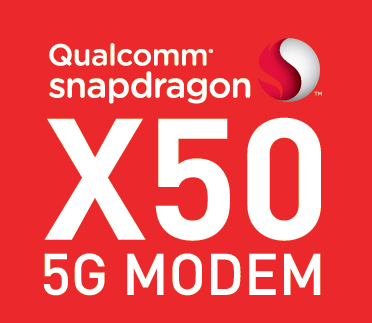 After a decade-long appeal process, the Japan FTC concluded that Qualcomm wasn't actually a monopoly. On Friday, the JFTC canceled a cease-and-desist order entered into back in September 2009. At the time, the Japanese regulatory body found that the mobile chip giant infringed on the country's Anitmonopoly Act and prevented Japanese manufacturers from asserting their intellectual property rights and development on wireless technology such as CDMA.

The irony here is that Japanese technology companies have virtually disappeared from the market over the last decade. The main smartphone manufacturers are now based in the U.S., China and South Korea. Per IDC, these top five manufacturers took over 5 percentage points of market share in the last year to control nearly 70% of the global market in Q4. 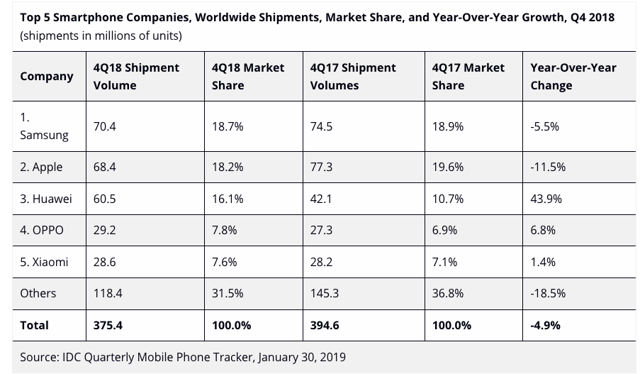 Both China and South Korea fined Qualcomm for illegal practices in the last few years and left the license process in effect. China fined Qualcomm $975 million and South Korea $850 million that the company is still appealing. The end result is that the top smartphone company in the world is back to using Snapdragon chips for their upcoming 5G phone.

Back in early 2018, Samsung (OTC:SSNLF) agreed to an updated strategic relationship with Qualcomm based on a strong focus on 5G technologies. Samsung even agreed to not interfere with Qualcomm's appeal of the large KFTC fine.

Further proof that the wireless tech giant doesn't wield a monopoly that prevents smartphone OEMs from access to modems is that neither of the top 3 smartphone companies were using a Qualcomm modem in the majority of their premium phones in 2018. 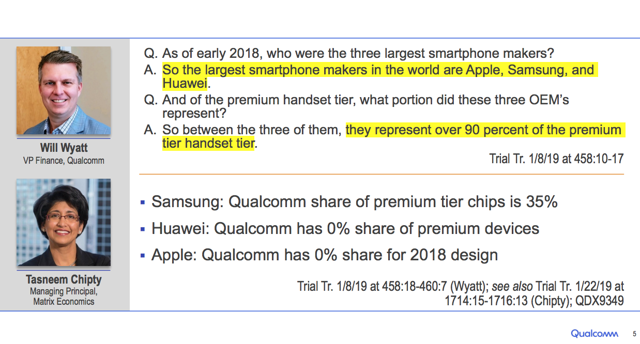 So far, every country in the world outside the U.S. recognizes that Qualcomm has the patented technology to charge the desired royalty rates without wielding monopolistic power. The company isn't a monopoly despite numerous fines for questionable business practices. The acknowledgements are begrudgingly done as key countries like Korea and China have competing technology that just doesn't match up.

Even several parts of the U.S. government don't agree with the FTC lawsuit against Qualcomm currently awaiting the judge's decision. Both the U.S. Defense and Energy departments joined Qualcomm in support of the FTC settling their dispute against the company in a manner that doesn't undermine the wireless technology giant.

The irony is that only one of the most valuable companies in the world still has a problem with Qualcomm's patent licensing plan. Qualcomm has even capped the licensing fees to the first $400 of a smartphone that favors Apple that now has phones topping $1,000. At a 3.25% royalty rate with a $400 device cap, Apple was only on the hook for a maximum $13.00 royalty before discounts or rebates that have run into regulatory disputes.

Apple has moved to Intel (INTC) modems with recent versions of the iPhone, thereby effectively eliminating any monopoly claim of the company or FTC. Apple is so desperate to find a valid alternative to Qualcomm modems that the tech giant is reportedly building a large workforce in San Diego to develop a competing modem that might actually replace Intel modems for the 2020 5G iPhone. The company is now plagued with using an inferior modem from Intel in order to avoid Qualcomm due to the ongoing legal battles, suggesting a settlement is a legitimate end to the story.

This data continues to confirm what was presented at the FTC trial. In no way does Qualcomm have a monopoly power when so many companies going back to 2015 have competing modem chips. The data from Samsung and Apple actually supports that other modems fail to keep up with the technology superiority of Qualcomm due in a large part to the wireless company developing the technology in the first place. 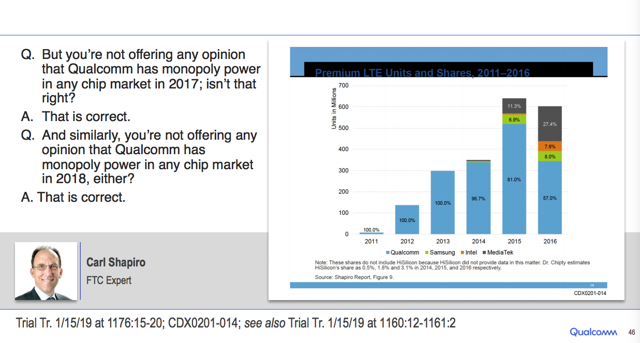 Qualcomm is spending a substantial amount on litigation so a settlement with Apple makes a lot of sense. The company claimed a 6% to 8% increase in R&D and SG&A expenses due primarily to legal expenses during FQ2 from ongoing lawsuits primarily with Apple. The company will be above their $6.4 billion annual operating cost target until these lawsuits are resolved further impacting EPS estimates in the short term.

Analysts have the company only earning $4.68 per share next year though Qualcomm is losing billions in license fees from Apple and spending tons of money on legal expenses in the process of fighting the tech giant.

These EPS numbers remain the current operating model without Apple and Huawei fully paying current royalty rates and higher expenses. The actual EPS target remains closer to Qualcomm's target of $7 per share after collecting the royalties in an expected positive outcome from the FTC trial and further share buybacks to reduce the diluted share count.

The key investor takeaway is that Qualcomm remains a cheap stock based on just about every government around the world deeming the company as not having monopolistic powers. The stock maintains some risk as the outcome of the FTC trial is unknown and the ruling of one judge could differ from the actual market reality.

Regardless, Qualcomm remains a solid bet to win this trial and any appeal with the stock providing substantial upside on any victory based on a normalized forward P/E multiple of 10x to 15x $7 EPS estimates. The stock could have a value of anywhere from $70 to $105 in such a scenario.

Stone Fox Capital
40.43K Followers
Author of Out Fox The Street
Out Fox the market with misunderstood, high reward opportunities
Stone Fox Capital Advisors, LLC is a registered investment advisor founded in 2010. Mark Holder graduated from the University of Tulsa with a double major in accounting & finance. Mark has his Series 65 and is also a CPA.

Disclosure: I am/we are long QCOM, AAPL. I wrote this article myself, and it expresses my own opinions. I am not receiving compensation for it (other than from Seeking Alpha). I have no business relationship with any company whose stock is mentioned in this article.

Additional disclosure: Disclaimer: The information contained herein is for informational purposes only. Nothing in this article should be taken as a solicitation to purchase or sell securities. Before buying or selling any stock you should do your own research and reach your own conclusion or consult a financial advisor. Investing includes risks, including loss of principal.