What is Japanification? There are all sorts of ways to explain what the term can mean. The simplest is a single word, which for me is "sideways."

We live in a non-linear world, meaning one where compounding is the biggest factor. Albert Einstein probably never said compound interest is the most powerful force in the universe, but the reason the saying has stuck and has been almost universally attributed to him is the magnitude of the truth behind it. Rate of change is everything.

If things are going as they should (progress, that is), on a graph it is the beautiful geometric growth curve. Even a constant rate of change leaves only this impression. Inflation, believe it or not, relates to that rate of change rather than absolute terms. Millionaires become billionaires become trillionaires because that's the way the world works now that the modern Renaissance human has overcome starvation and frequent (enough) plagues.

He has also become so wealthy and progressed so far that people have stopped having babies, at least at the same rate as his recent ancestors. There aren't simple reasons for these demographic changes, but we are left to wonder which comes first; does the modern, wealthy society produce fewer offspring; or does a malfunctioning modern economy leave workers so much of an uncertain future by which they contemplate essentially the same thing?

Regarding Japan, the more fashionable response is the former. Nobody is going to confuse the 21st Japanese economy for its glory days, but supposedly when accounting for the demographics it hasn't been all that bad over there. Many years ago, it was argued QQE was unnecessary because the economy was, adjusting for population, doing pretty well:

Since the late 1990s, the growth in Japan's real GDP per head has outperformed every other major economy. And unlike other major economies, income inequality in Japan has not increased, remaining amongst the lowest in the developed world.

Just before the Great "Recession" struck, Japan was on an upswing which led many (the Economist, of course) to conclude:

GDP growth figures flatter America's relative performance, because its population is rising much faster, by 1% a year, thanks to immigration and a higher birth rate. In contrast, the number of Japanese citizens has been shrinking since 2005. Once you take account of this, Japan's GDP per head increased at an annual rate of 2.1% in the five years to 2007, slightly faster than America's 1.9% and much better than Germany's 1.4%. In other words, contrary to the popular pessimism about Japan's economy, it has actually enjoyed the biggest gain in average income among the big three rich economies.

In other words, if we don't account for Japan's crash, and so long as things look like they are somewhat growing again, its post-crisis malaise isn't really that bad! No one should puzzle over lost decades, if we color it just enough perhaps it can be sold widely as minimally acceptable. Stop looking for economic mysteries, there aren't any to solve!

Never does anyone account for these very clear swings up and down, the ultimate nature of which is getting nowhere. Sideways. That's the point. An economy that is caught up in this worst case is one which is susceptible to only these swings.

Japanification grimly on display in Japan: 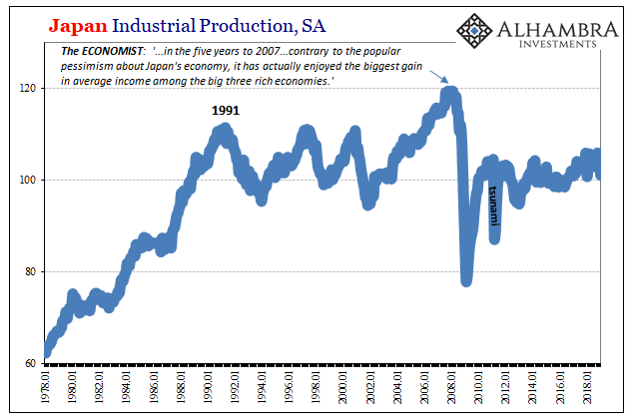 According to its Ministry of Economy, Trade, and Industry, total Japanese Industrial Production in January 2019 was 9.3% less than it was in May 1991. Twenty-eight years in between, and nearly 10% shrunk. That's not demographics; it cannot be population factors that account for all of the facts.

This isn't doing pretty well, either.

We don't need information about crude birth rates or the like, we can plainly see when what went wrong went wrong - 1991. It wasn't merely a real estate bubble which burst, it was the unleashing of "zombie banks", the personified malfeasance of a credit-based system which the central bank, overactive as it would become, could never, ever surmount. ZIRP, QEs, QQEs, YCCs, all the rest, none of them have changed anything, sideways still prevails. Thus, the desire to explain sideways in an official way that doesn't look at official policy responses.

We are left to far more honestly consider instead whether sideways causes so much uncertainty that it can lead workers to rethink family and society. Economic insecurity seems almost quaint by modern comparison. A hundred years ago or less, unemployment or wage cuts meant absolute destitution. But it wasn't a permanent feature.

Economic growth followed Friedman's plucking model, the V-shape to each cycle. The geometric growth curve was never abandoned and deviations from it lasted no longer than a year or two. This is visible even on Japan's IP chart (above), the couple of (nasty) recessions during the eighties only transitory disturbances in an otherwise solid trend. It was only 1990 that everything changed.

This includes Japan's labor condition. Birth rates had slowed dramatically in the seventies as Japan Inc., everyone believed, was poised to dominate global trade. 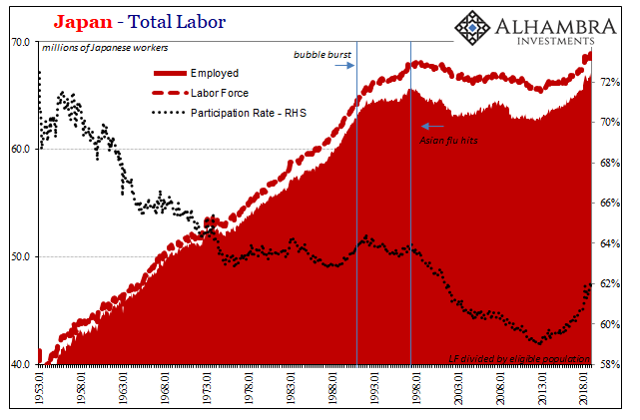 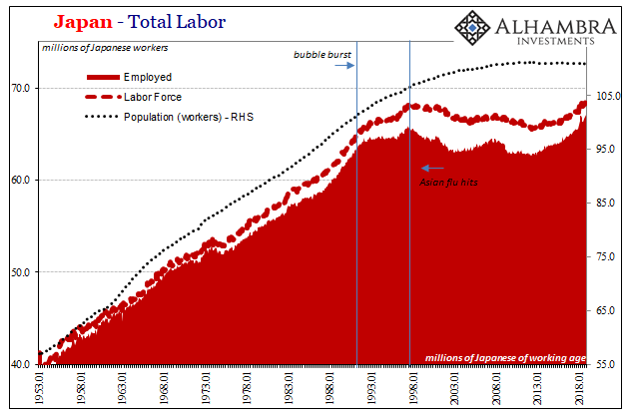 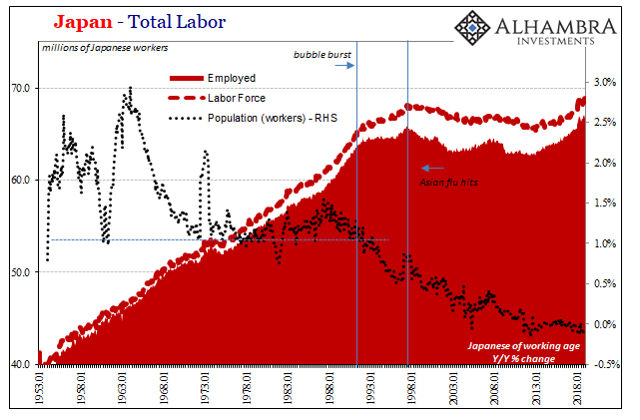 Was post-bubble Japan unable to recover because of the bubble, or because the Japanese people had stopped having babies the generation before it? Or, put another way, if Japan had actually recovered, zombie banks effectively and decisively destroyed by effective money/bank policy, would the demographic trend have continued?

A counterfactual is always hard to argue. Given modern experience, though, even a small Japanese baby boom might not have been so hard to imagine during the nineties as Japan Inc. could've been resurrected from its ashes. By focusing instead on population, and using that as an excuse to rethink Japanification, it might be that those making the argument are actually missing the big picture.

Japan's post-1990s economy can seem OK when you look at it from the standpoint of demographics, which obscures the more obvious truth that Japan's economy is not OK, forcing you to defer to demographics to reach a reduced standard for interpretation. Japan's population track didn't reach any sort of critical moment around 1991, but Japan's monetary system sure did.

Thus, we shouldn't focus on trying to make the aftermath seem OK when the whole thing really comes down to what happened in 1990.

Population changes cannot account for the 1990s. The banking system's constant failure, the one lost decade, sure had an impact on what followed in the 21st century. You can't argue that if we ignore the nineties Japan's economy in the 2000s has been "good enough."

Japanification, these sideways charts, are proliferating around the world which simply means the excuses are multiplying by location, too. If Economists take from Japan birth rates rather than sideways, it is akin to claiming this is as good as it could possibly have been.

Only that last part is true, which is the whole ballgame.

Economic growth is not population growth. At least it wasn't until something took the first part away. In Japan, that was 1990. The rest of the world, 2007. It wasn't really real estate bubbles, nor babies. Banks are where sideways comes from. 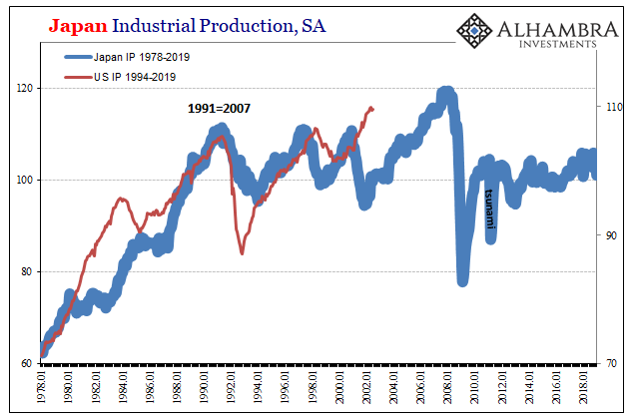 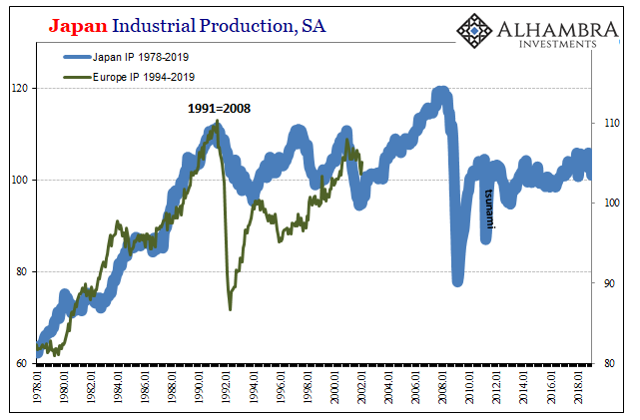 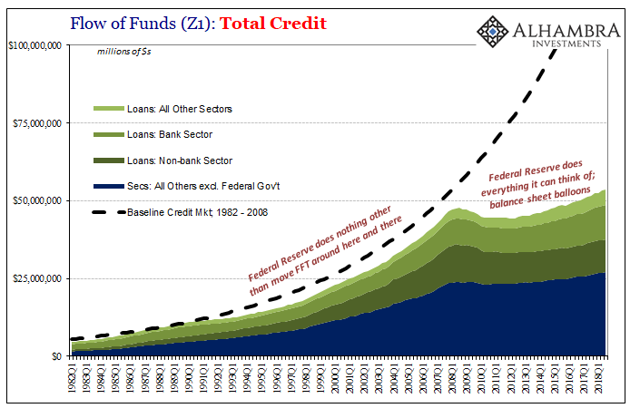 Jeffrey Snider
4.64K Followers
As Head of Global Investment Research for Alhambra Investment Partners, Jeff spearheads the investment research efforts while providing close contact to Alhambra’s client base. Jeff joined Atlantic Capital Management, Inc., in Buffalo, NY, as an intern while completing studies at Canisius College. After graduating in 1996 with a Bachelor’s degree in Finance, Jeff took over the operations of that firm while adding to the portfolio management and stock research process. In 2000, Jeff moved to West Palm Beach to join Tom Nolan with Atlantic Capital Management of Florida, Inc. During the early part of the 2000′s he began to develop the research capability that ACM is known for. As part of the portfolio management team, Jeff was an integral part in growing ACM and building the comprehensive research/management services, and then turning that investment research into outstanding investment performance. As part of that research effort, Jeff authored and published numerous in-depth investment reports that ran contrary to established opinion. In the nearly year and a half run-up to the panic in 2008, Jeff analyzed and reported on the deteriorating state of the economy and markets. In early 2009, while conventional wisdom focused on near-perpetual gloom, his next series of reports provided insight into the formative ending process of the economic contraction and a comprehensive review of factors that were leading to the market’s resurrection. In 2012, after the merger between ACM and Alhambra Investment Partners, Jeff came on board Alhambra as Head of Global Investment Research. Currently, Jeff is published nationally at RealClearMarkets, ZeroHedge, Minyanville and Yahoo!Finance. Jeff holds a FINRA Series 65 Investment Advisor License.
Follow
23 Comments
To ensure this doesn’t happen in the future, please enable Javascript and cookies in your browser.
Is this happening to you frequently? Please report it on our feedback forum.
If you have an ad-blocker enabled you may be blocked from proceeding. Please disable your ad-blocker and refresh.