For the last several years, I have described the Fed’s interest rate regimen as trying to steer a path between the Scylla of an inverted yield curve (if long rates stayed low) and the Charybdis of a downturn in housing (if long rates moved higher in tandem with low rates). Since I last looked at this in December, the Fed has changed its tone decisively, so let’s look at where we are now.

The good news: housing is poised to rebound

For most of last year, the Fed was bumping into Charybdis, as the 10-year yield went decisively above 3%, mortgage rates over 5%, and housing sales by all measures declined beginning no later than last March.

Well, I have good news for those who think that the Fed should act on the potential for yield curve inversions: indirectly, it has! That’s because, as soon as the yield curve started to invert early last December, stock prices began to dive — and started to cliff-dive after the Fed raised rates in the teeth of the inversion. The Fed reacted to this dive by adopting a new dovish tone at the end of December, and since then equities have recovered nicely:

So, the Fed reacted directly to jitters in the stock market, which was in turn reacting to the inversion in the bond market.

There is further good news in the subsequent decline in mortgage rates. Here they are weekly, through Monday: 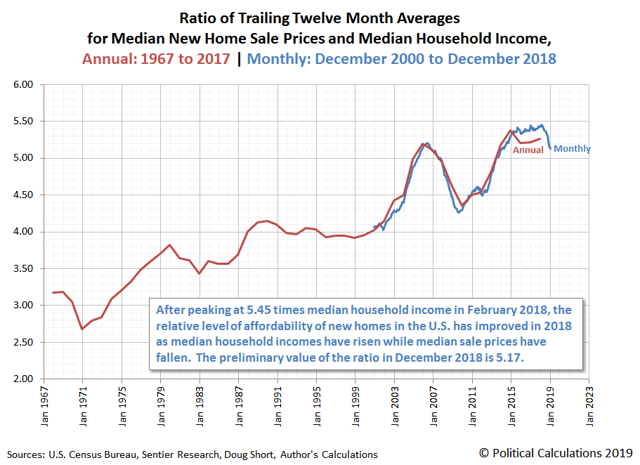 All of this means that we are probably close to, if not at or even slightly past the low point for housing data, and similarly for negative YoY readings in housing sales, permits, and starts. This has already shown up in purchase mortgage applications, which have been up YoY for almost this entire year so far, as shown in the below graph by Yardeni.com: 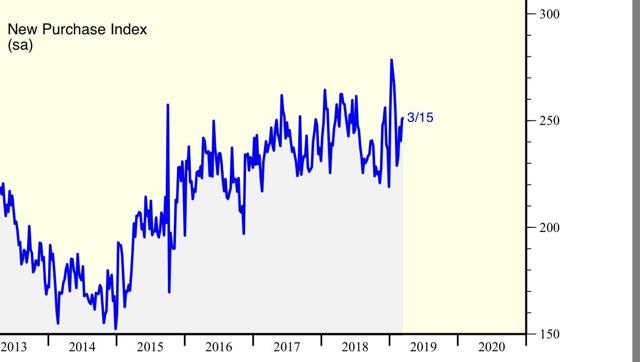 The bad news: after colliding with Charybdis, the Fed scrapes Scylla - again

But if lower interest rates mean relief for the housing market, they aren't turning positive for the economy as a whole, as the Fed is once again sideswiping the Scylla of an inverted yield curve.

In December, the yield curve came within 3 basis points of completely normalizing on the day before the Fed announced its rate hike. But since then, the portion of the yield curve that inverted has spread, both to shorter term Treasuries, as shown in this historical graph by Recession Alert of the number of yield spreads that have been inverted over the last 20 years: 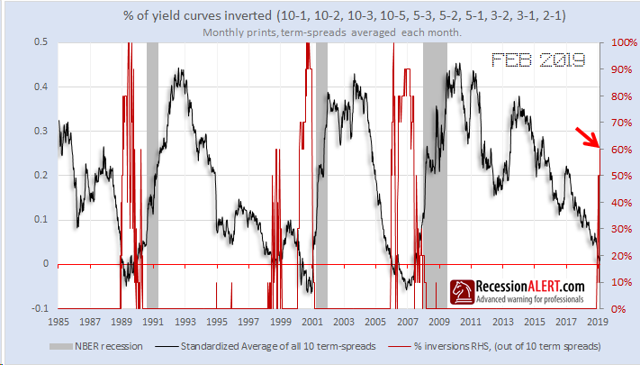 In the last week, the 7 year Treasury has inverted as well, and as I type this the morning after the Fed meeting, the 10 year Treasury is less than 3 basis points away from inverted in comparison with the 6 month Treasury: 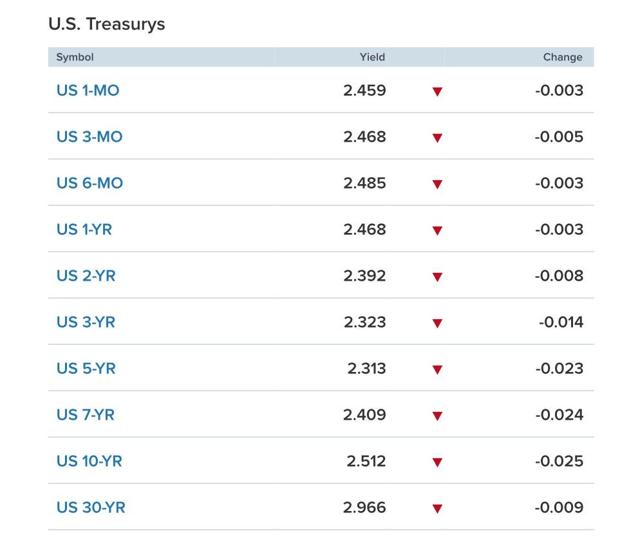 Conclusion: the Fed looks boxed in, and may need to *cut* rates very soon

While the relief in the housing market is a positive sign for next year, last year’s weakness is still going to percolate through the economy towards production and employment this year. The at very least flat yield curve is as bad as that of 1966 and 1998. The former featured a near-recession that was only averted by LBJ’s “guns and butter” stimulative fiscal policy. The latter was saved by the internet boom. If the economy continues to weaken — and I have forecast such weakening by midyear this year since about 9 months ago — there is likely to be a decisive inversion in the bond market very soon.

In both 1966 and 1998, as shown in the two graphs below, the Fed came to the rescue by cutting interest rates roughly 4 months later in each case:

In the former case, industrial production had begun to actually decline. In the latter case, the Fed moved as soon as Long Term Capital Management imploded.

If there are signs that manufacturing and production are rolling over in the next few months, and gas price increases do not goose inflation, I expect the Fed will start to *cut* rates. But if next week’s final Q4 GDP report shows a downturn in corporate profits that mirrors the q/q decline in S&P 500 earnings, and if the recent weakness in the short leading indicators continues and spreads, it may be too late.