Champions Oncology (NASDAQ:CSBR) is a small, fast growing, and innovative company serving the pharmaceutical and biotech market for oncology and immune-oncology drug development. Over the years, Champions has developed a large, differentiated TumorBank with unique mutations for which pharmaceutical and biotech companies are trying to develop cancer therapies. To that end, Champions is playing in a sector which is receiving significant R&D budget, which should be a tailwind to future growth. For example, Acute Myeloid Leukemia (AML) is one area garnering scientific and investor attention - just look at Bio-Path Holdings (BPTH) - and Champions has numerous PDX models for AML which it developed a couple years ago in response to what it saw as increasing demand for AML solutions where there was an unmet need.

Champions core business is taking tumors from the TumorBank and engrafting them into mice in order to test cancer therapies on a colony of immuno-deficient mice before clinical trials begin. Champions calls this its TumorGraft platform. By zeroing in on what compounds might work, Champions customers can save significant R&D dollars by focusing research in the most promising areas.

A picture is worth a thousand words; the slide below illustrates the model: 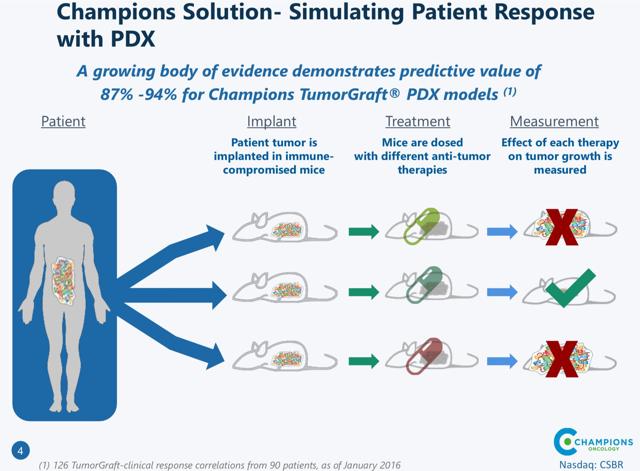 Champions client roster includes the top 18 of 20 pharmaceutical companies. While many remain unnamed, periodically, Champions discloses its customers when appropriate, such as AstraZeneca (AZN) for whom it built 130 patient derived xenograft (PDX) models related to certain forms of non-small cell lung cancers and breast cancer.

I understand Champions sees significant repeat business from its customers, and no customer accounts for more than 15% of revenue. In addition, management commentary over the last several quarters indicates demand for their services continues to grow. One leading indicator of this growth comes in the form of the COGS line item because, according to GAAP rules, Champions must record expenses as incurred - PDX studies take on average about 6 months to complete - and can only record revenue once Champions provides its deliverables to its customers.

Over the last several quarters, COGS has been incrementally expanding sequentially, which indicates revenue growth will likely follow suit.

I'm assuming new business carries about 57-60% gross margins (although reported gross margin will be less assuming a growing pipeline due to early recognition of expenses for new projects related to future revenue), such that dividing the COGS line by 40-43% could be a decent approximation of revenue looking out two quarters. For example, $3M in COGS could lead to $7-7.5M in revenue for an approximation of future revenue. Assuming management was able to record the extra $600k in "missed revenue," revenue in the latest quarter would have been $7M, in the low end of that range. The "missed revenue" and added COGS was a result of having to redo a couple of PDX mice studies that were expected to be completed in the quarter.

Given the COGS the last couple quarters (although Q2 included around $400k in setup costs of testing new ex vivo and flow cytometry capabilities), I'm assuming revenue can accelerate to $7-7.5M for Q4 FY2019, and $7.5-8M in Q1 FY2020. Part of the growth will come from smaller ex vivo studies with shorter revenue recognition timelines and is expected to begin to ramp meaningfully in Q1 FY2020.

Confidence In The Pipeline

One telling indicator that shows management's philosophy on operating the business and its confidence in its pipeline comes from the fact that in October 2018, management decided to not renew a $1.5M credit line to (1) save $30k in commitment fees and (2) because management has good visibility into bookings over the next several quarters which bodes well for future cash generation. I don't think you cancel a $1.5M credit line with only a couple million dollars of cash on your balance sheet unless you have solid visibility about future profits and cash generation.

Moreover, management and strategic investors (Battery Ventures and NEA) own more than 50% of the company (including warrants) and are highly incentivized to not dilute themselves. The warrants represent one avenue to bring more cash on the balance sheet to further accelerate Champions growth. I understand the warrants are in-the-money with the next tranche expiring January 2020, with these shares likely to be locked up by management and strategic investors rather than flipped in the market.

Even with what appears like one-time operation issues in Q3 FY2019, the company generated $1.2M cash, bringing the cash balance to $3.3M at quarter-end. If we assume the company did not incur an additional $400k in cash costs in the quarter, Champions cash balance would likely be nearly $4M, further showcasing its cash generating ability within its highly leveraged operating model and growing incremental revenues. I understand that ~60% of incremental revenue drops to the bottom line, creating a potentially significant growth in earnings as revenue scales to $7.5M per quarter and higher.

Part of the highly leveraged operating model comes from the fact Champions moved into a new lab facility to perform its PDX studies, and the company is running at about half capacity. I understand that Champions used to pay a variable cost for its vivarium per cage (under its old lab space arrangement), which dampened the earnings leverage of the business. To that end, given many of its COGS is now fixed, margins should expand to the mid 50% range as fixed costs are spread across more revenue.

To illustrate that point, normalizing Q3 earnings results in $7M in revenue (adding $600k missed revenue) and $3M COGS (backing out one-time costs for additional mice to reperform studies, etc.), resulting in an adjusted $4M in gross profits, or 57% of revenue. If we start to model out $8M+ in quarterly revenue at 55% margins and a relatively fixed operating cost base, I believe the business can start generating 10c EPS, or 40c annualized. When revenues reach $10M per quarter, the business could throw off 20c EPS (80c annualized).

So, how does Champions get to $10M quarterly revenue? Champions is leveraging its existing customer base and adding new services, such as ex vivo and flow cytometry, in addition to adding new customers. The growth strategy entails layering on new services earlier in the pre-clinical phase and for Champions to stay engaged longer through the clinical trials, using the TumorBank as the unique and proprietary selling proposition. Historically, PDX models were only used in pre-clinical studies.

According to management, these new services were requested by customers, and therefore, there is built-in demand from existing customers. I understand ex vivo studies carry an average cost between $50 and $100k and flow cytometry deals will be $1M+. Given Champions is layering the services on top of its core PDX business, there should be some significant leverage on these offerings too.

Another reason to like Champions is the people involved here have great track records and are leaders in the oncology space.

First, Dr. David Sidransky took over a public shell company in 2007, became one of the largest shareholders, and redirected the company's direction towards personalized cancer research. Dr. Sidransky is now the lead director of CSBR and is the Director of the Head and Neck Cancer Research Division at Johns Hopkins University School of Medicine. He is a world-renowned oncology researcher.

Joel Ackerman, who was CEO from 2011 through 2017, is now the CFO at DaVita. Mr. Ackerman also owns significant shares in CSBR.

Current CEO Dr. Ronnie Morris is a serial entrepreneur with successes in the home health space, including selling his former company MDVIP to Procter & Gamble (PG) in 2009. Mr. Morris owns over 10% of CSBR too.

In addition, CSBR has attracted significant investment from successful venture capital firms, New Enterprise Associates and Battery Ventures, each owning ~20% or so of CSBR.

In terms of valuation, because there is a mismatch in timing of COGS and revenue, it may be most instructive to use a price/sales multiple. I understand acquisitions in this space have been done around 5.5x run rate revenue (see JSR Corp. acquisition of Crown Biosciences), but they are not perfect comps to Champions because they include assets outside of the oncology space. Moreover, Champions has a highly leveraged operating model which could necessitate a premium.

Assuming 30% growth in FY2020 to account for continued 20% growth in the core PDX business plus some revenue from new services coming online, FY2020 revenue could approach $35M. Then, if we assume 53-54% gross margin and $13M operating costs, CSBR could potentially generate 50c EPS next year. Using a 6x sales multiple and a 35x earnings multiple arrives at a valuation somewhere in the neighborhood of $18 per share with acceptable risks now that Champions is cash flow positive and significantly strengthening its balance sheet, coupled with good visibility in the pipeline.

It's not often you find a microcap which is managing aggressive growth, profitable (looking over several quarters), and led by a high quality management team with significant skin in the game. Investors are aligned with CEO Ronnie Morris, who owns over 10% of the company, and who doesn't take a cash salary. In addition, Champions could have strategic value to other players in this space, given the company enjoys a large customer base who exhibit stickiness from repeat business.

Moreover, Champions has significant IP in its TumorBank, which is not easily replicable such that it has hidden, off-balance sheet value. And, importantly, Champions is playing in a hot oncology and immune-oncology sector, which is receiving significant investment for which the company should be able to capture significant share.

Disclosure: I am/we are long CSBR. I wrote this article myself, and it expresses my own opinions. I am not receiving compensation for it (other than from Seeking Alpha). I have no business relationship with any company whose stock is mentioned in this article.