One of the best assets for income-seeking investors is master limited partnerships as these entities boast both high distribution yields and offer tax benefits to those receiving the distributions. The asset class has unfortunately fallen out of favor among investors over the past few years. This is due to a few factors, the biggest of which is the sheer number of them that were forced to slash their distributions during the oil bear market in the middle of the decade. Since that time, many of these companies have changed their business models to be less aggressive and, therefore, safer for investors, and oil production has surged dramatically, which has been proving quite beneficial for many of these companies. Fortunately, there are a few funds that make it easy for an investor to add this high-yielding asset class to their portfolios to profit off of these positive fundamentals. One of the best ones is the First Trust Energy Income & Growth Fund (NYSE:FEN).

According to the fund's website, the fund's objective is to seek a high level of after-tax total return with an emphasis on current distributions paid to shareholders. This investment objective may make one think that the fund boasts a very high current yield, and this is indeed the case as FEN yields 10.68% as of the time of writing. The fund generates this yield by investing in cash-generating securities of companies in the energy sector, particularly master limited partnerships. In fact, the fund specifically states that it invests at least 85% of its assets in the securities of these companies.

FEN is something of a rarity among closed-end funds due to its legal structure. In short, the fund is actually structured as a C-Corporation instead of a regulated investment company. This is due to the fact that current law restricts the portfolio that an RIC can have to under 25% of total assets invested in MLPs. In order to get around this, the fund structured itself as a corporation. This is similar to what some other MLP funds such as the ALPS Alerian MLP ETF (AMLP) have done. This has the downside of exposing the fund to corporate income taxes instead of allowing it to act as a pass-through entity, but the tax advantages of MLPs help to offset some of these taxes.

As already mentioned, FEN invests heavily in master limited partnerships, and this is reflected in the top ten holdings of the fund. 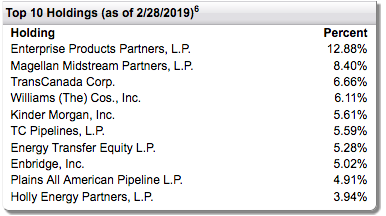 As we can see here, six of the companies in the fund's top ten holdings are master limited partnerships. The other four are C-corporations that have similar business models to the MLPs. This is not necessarily a problem for the fund's goal of producing income, though, as all four of these corporations - TransCanada (TRP), The Williams Cos. (WMB), Kinder Morgan (KMI), and Enbridge (ENB) - are favorites of many income-focused investors.

As many of my readers on closed-end funds likely know, I generally dislike seeing any single asset account for an outsized portion of a fund's portfolio. This is generally defined as 5% of net assets as this is roughly the level where the asset begins to expose the portfolio as a whole to idiosyncratic risk. Idiosyncratic risk is the risk that any stock or financial asset possesses that is independent of the market as a whole. It is this risk that we aim to reduce or eliminate via diversification. Unfortunately, though, when a portfolio's assets are too heavily concentrated in an asset (or a few assets), the risk is not completely diversified away, and therefore, an event that causes the price of any particular heavily-weighted asset to decline could bring the entire portfolio down with it. As we can see above, FEN has eight positions that each account for more than 5% of the fund's total assets. One of these positions, Enterprise Products Partners (EPD), accounts for an enormous 12.88% of the portfolio, and while Enterprise Products Partners is a good company, this still exposes the fund's shareholders to a significant amount of company-specific risk.

The majority of MLPs are engaged in the transportation and processing of natural gas, refined petroleum products, or crude oil. Thus, it makes sense that the majority of the fund's holdings are in companies engaging in these activities:

At first glance, this may appear to be highly concentrated exposure to primarily pipeline companies. However, when we consider that the vast majority of energy-sector MLPs are in the pipeline transportation business, this is actually a fair amount of diversification. The pipeline sector is also a remarkably stable one with most of the companies operating under long-term fixed rate or take-or-pay contracts for the movement of commodities through their pipelines. In addition, the majority of these contracts carry minimum volume commitments that require the pipeline company's customers to pay for a minimum quantity of goods moving through the network. This has the effect of providing these companies with relatively stable cash flows and insulation against commodity price fluctuations.

As I briefly mentioned earlier, many master limited partnerships have been benefiting from the growth that we have seen in the nation's energy production. As we can see here, the Energy Information Administration states that the output of both crude oil and natural gas has increased year over year in every major resource basin in the continental United States:

Furthermore, current predictions point to further output growth going forward. This comes in spite of the recent volatility in energy commodity prices. As we can see here, the Bakken shale play in North Dakota is expected to see 55% production growth by 2021, while the venerable Permian basin in West Texas is expected to see its production surge by a massive 80% over the same period.

In order to benefit from any of this production growth, though, upstream exploration & production companies have to be able to get the oil and natural gas to market. This is where pipeline companies, which account for the majority of the assets in FEN's portfolio, come in. As these firms charge based on the volume of resources being transported, higher production levels should result in growing revenues and cash flows for the pipeline operators. This has indeed been the case recently. In addition, many of these firms have begun to expand their networks in order to capitalize on the forthcoming higher production levels. Fortunately, they are doing this smartly as they are securing contracts from customers guaranteeing the use of these pipelines before starting construction, ensuring that they will not invest the money in the capital projects needlessly. Thus, these companies that once again account for the majority of FEN's portfolio should see growing cash flows as this story plays out. Ultimately, this should benefit the owners of the fund.

As already mentioned, FEN currently boasts a 10.68% distribution yield, which is actually quite a bit lower than where it was when I first discussed this fund back in December. With that said, though, the fund's current yield is still quite respectable and should certainly be attractive to most income-focused investors.

One thing that might concern many investors, though, is that nearly all of the fund's distributions are classified as return of capital. 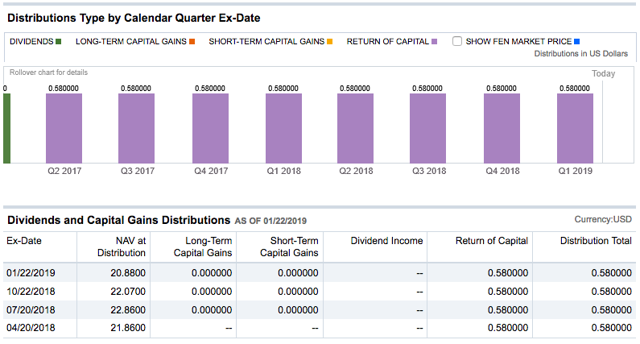 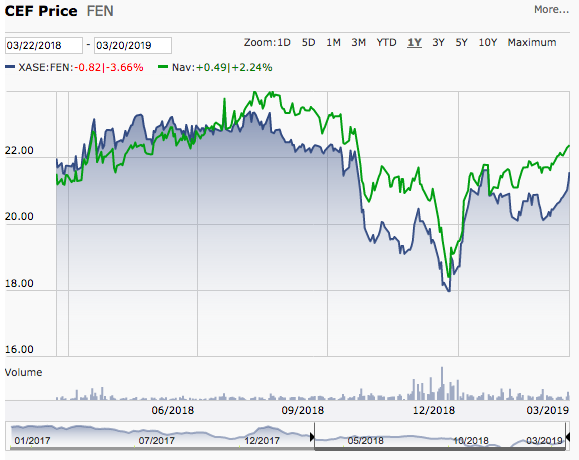 As we can see here, the fund's net asset value did decline significantly in the fourth quarter of last year before rebounding year to date. This decline appears to be solely due to the market as we can see no real destructive impact on net asset value from the distribution. Thus, we can conclude that investors should not be overly concerned with the fact that these distributions are classified as return of capital and should instead simply enjoy the tax-advantaged income.

As is always the case, it is critical for us to ensure that we do not overpay for any asset in our portfolio. This is because overpaying for any asset is a surefire way to ensure that we generate sub-optimal returns from that asset. In the case of a closed-end fund such as FEN, the usual way to value it is by using a measurement known as net asset value, which is the market value of all of the assets contained in a fund's portfolio minus any outstanding debt. It is, therefore, the amount that the investors would receive if the fund were immediately liquidated and shut down. Ideally, we want to buy shares of the fund when they are trading at a price below the net asset value as that means that we are essentially buying the fund's assets for less than they are actually worth.

As of March 21, 2019 (the most recent date for which figures were available as of the time of writing), FEN had a net asset value of $22.51 per share. As of the same date, the shares traded at a market price of $21.72 per share. Thus, the fund is currently selling at a reasonably attractive discount of 3.51%. While the fund has traded at larger discounts in the recent past, this is a fund that also trades at a premium to NAV often enough that any time that you can get it at a discount, the price is reasonable.

In conclusion, energy sector partnerships are an excellent way to generate income off of your portfolio, even though they have become somewhat overlooked since the middle of the decade. FEN is one of the better funds that investors in the sector, although the portfolio is not as diversified currently as I would like to see. The underlying companies boast some attractive growth prospects, and the fund as a whole is undervalued. Therefore, picking up shares of the fund is a good way to easily add the asset class to your portfolio.

Power Hedge
12.83K Followers
Author of Energy Profits in Dividends
In-depth Research on underfollowed dividend stocks with 7%+ yields
Power Hedge is an independent stock research and analysis firm with a passion for macro- and microeconomic analysis. Power Hedge focuses our research primarily on dividend-paying, international companies of all sizes with sustainable competitive advantages. Power Hedge is neither a permabear nor a permabull. However, we believe that, given the current structural problems in the United States, the best investment opportunities may lie elsewhere in the world. The firm's strategy is primarily buy and hold, but will stray from that strategy on occasion. Our ideal holding period is forever, however we realize that both internal and external forces can impact an investment. For this reason, we believe that it is vital to keep a close eye on all of your investments. We do not believe in changing an investment based on short-term market swings.

Disclosure: I am/we are long FEN. I wrote this article myself, and it expresses my own opinions. I am not receiving compensation for it (other than from Seeking Alpha). I have no business relationship with any company whose stock is mentioned in this article.