I failed to follow my own advice this week. I put in an order to buy my full 2019 allotment of U.S. Series I Savings Bonds on March 28. Why? Because the time is right to buy I Bonds.

My usual advice, repeated yearly, is to hold off on purchasing I Bonds until two "limbo periods" each year -- after the new variable rate is locked in, but before it goes into effect. The next limbo period begins April 10, when the BLS will release the March inflation report. At that point, we will know the new inflation-adjusted variable rate that will go into effect for purchases after April 30 and eventually affect all I Bonds.

The I Bond's fixed rate, which is currently 0.50% and the highest in 10 years, will also be reset May 1. My belief is it will go down, possibly substantially, and that means buying before April 30 is the correct decision. I Bond investors should always seek a higher fixed rate, which stays with the investment until it is redeemed or matures in 30 years. The fixed rate is the I Bond's "real yield to maturity" and is equivalent to the real yield of a Treasury Inflation-Protected Security.

Because I believe the fixed rate will be going down May 1, I decided there was no reason to wait any longer. By buying in late March, I can lock in one full month of interest. However, buying anytime in April will also accomplish the same important task: Lock in that 0.50% fixed rate.

What's happening with the variable rate?

There is a problem ahead for I Bond investors: The next variable rate reset is probably going to be much lower than the current 2.32%. As recently as a month ago, it looked like the rate reset could be below zero, but a recent rise in gas prices will probably ensure a positive rate. Here are the numbers so far, with the last piece coming April 10 with the March inflation report:

So even with another month of strong non-seasonally adjusted inflation (let's say another month of 0.4%), the six-month inflation number is going to rise to only 0.53%, which creates a new I Bond variable rate of 1.06%. This is a rough projection; but I do think inflation will rise in March. The number could be higher of lower.

So, based on this rough assumption, if you buy I Bonds before May 1, you will receive:

What's happening with the fixed rate?

The U.S. Treasury does not reveal how it sets the I Bond's fixed rate on May 1 and November 1 of each year. But I have been tracking these decisions for many years, and it does appear the rate reset takes into account the current yields on 5- and 10-year TIPS. When those real yields rise, a higher fixed rate is likely. When they fall, a lower fixed rate is likely.

Just before the last rate reset, on November 1, 2018, real yields on 5- and 10-year TIPS had surged to their highest levels in a decade. I reported in an article on October 15, 2018 that the yield data supported a fixed rate of 0.50%, and that happened on November 1.

Since then, however, real yields have plummeted, as shown in this chart comparing the real yields of 5- and 10-year TIPS versus the I Bond's fixed rate, from November to today: 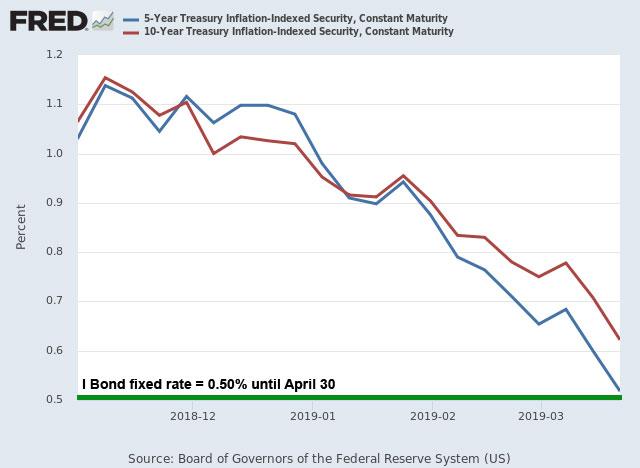 Keep in mind that I Bonds have advantages over TIPS, and some spread in yield is justified. I Bonds have a flexible maturity, earn tax-deferred interest and have much better protection against deflation.

Clearly, today's real yields no longer support an I Bond fixed rate of 0.50%. When the gap narrows that much, the fixed rate is going lower. But because the Treasury only resets this fixed rate twice a year, investors have an interesting opportunity: Capture that above-market yield today.

What will be the I Bond's new fixed rate? No one except the Treasury can predict that with certainty, and it's still a bit early for a good projection. But here are the data I am following, using real yields as of Friday for the May 1 projections: 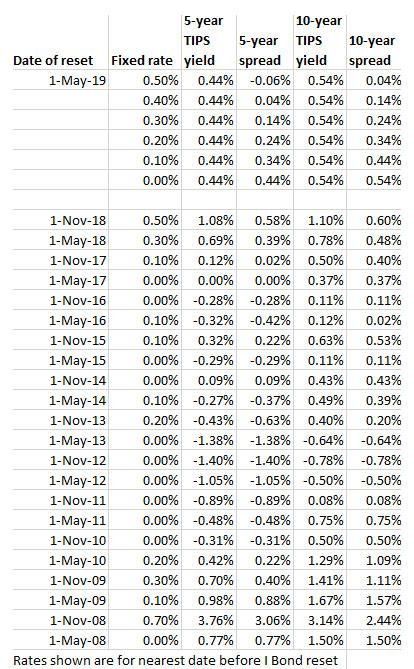 I'd say we are right on the edge between a 0.20% or a 0.30% fixed rate. A lot will depend on what happens with real yields in the next month. If nominal real yields continue falling, real yields will follow, and a fixed rate of even 0.10% would be possible.

I'm recommending that I Bond investors buy all (at least part!) of their 2019 allocation before May 1, to lock in that 0.50% fixed rate. The Treasury limits I Bond purchases to $10,000 per person per year, in electronic form at TreasuryDirect. There are no commissions, fees or carrying costs. (Investors can also get up to $5,000 a year in paper I Bonds in lieu of a federal tax refund.)

How could this investment go wrong? The Treasury has surprised me in the past, but I don't think I'm wrong about a lower fixed rate coming May 1. Also, the inflation-adjusted variable rate will probably drop substantially on May 1. You might as well buy now to get six months of a higher composite rate.

The longer term is uncertain. The global economy seems to be slowing, which would indicate lower nominal interest rates ahead. The Federal Reserve seems to be committed to holding short-term interest rates at current levels. So in the "near" long term, I don't see any reason not to buy I Bonds before April 30, to lock in that 0.50% fixed rate for up to 30 years.

Sell I Bonds and reinvest?

If you have I Bonds with a fixed rate of 0.0% that you have held for at least five years, you could look at selling some of those and reinvesting the proceeds in new I Bonds with a fixed rate of 0.50%, up to $10,000 per person. You can sell I Bonds held for five years with no penalty, but you will face federal income taxes on the accrued interest. Also, you are still limited to by the $10,000 cap, so your total holdings won't increase.

This is a good strategy if you don't have excess cash right now to invest in new I Bonds.

The March inflation report, which will be issued April 10 at 8:30 a.m. EDT, will set the I Bond's new variable rate to go into effect on May 1. I'll be writing about that event on April 10 and soon after I will update my data projecting the I Bond's new fixed rate.

We'll also be get a new 5-year TIPS at auction on April 18, but with 5-year TIPS currently yielding 0.44% above inflation, the I Bond is a better investment at 0.50%. So if this spread continues, buy I Bonds before that 5-year TIPS.