My first article on Seeking Alpha was published back in September last year, and I shared my views on the Coffee Holding Company (NASDAQ:JVA). You can find the article here. Since then, my interest in the coffee market has only grown, and so I decided to share my thoughts not only on JVA but on the coffee market as well.

Coffee Holding Co. manufactures, roasts, packages, markets as well as distributes roasted and blended coffees for private label accounts as well as its own brands. Furthermore, the company manufactures and sells coffee roasters. Customers are mostly located on the domestic market in the U.S., but the company reports limited sales in Canada, Australia, and certain countries in Asia.

While there are three major product categories, the company considers the three product lines to be a single reporting segment. The three categories in which the company operates are Wholesale Green Coffee, Private Label Coffee, and Branded Coffee.

Within the Wholesale Green Coffee, the company imports un-roasted green coffee beans and resells them to both small and large roasters and coffee shops. The Private Label Coffee segment consists of selling roasted, blended, packaged coffee under a private label to other parties such as supermarkets. The company has a number of brand names in different segments under which it sells a portion of its coffee; this is the Branded Coffee category.

Coffee growers, suppliers as well as consumers, care about the price of coffee which is a function of supply and demand. Coffee prices are seeing record lows, and the levels seen in 2011 are long gone. So, where are the prices headed going forward?

As per the latest report by the US Department of Agriculture, which can be found here, the 2018/19 period should see a record high production on the back of Brazil's increased production of Arabica coffee and the rebounding production of Robusta coffee. Brazil is the world's largest supplier of coffee and accounts for as much as 28% of global coffee production. According to the National Coffee Association, Brazil's share could increase even further in 2019 as production is forecast to grow - the second half of 2018 saw increased exports of coffee from Brazil, and this trend should thus continue. 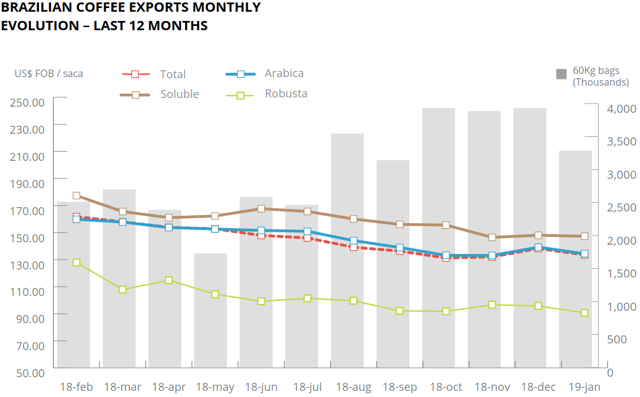 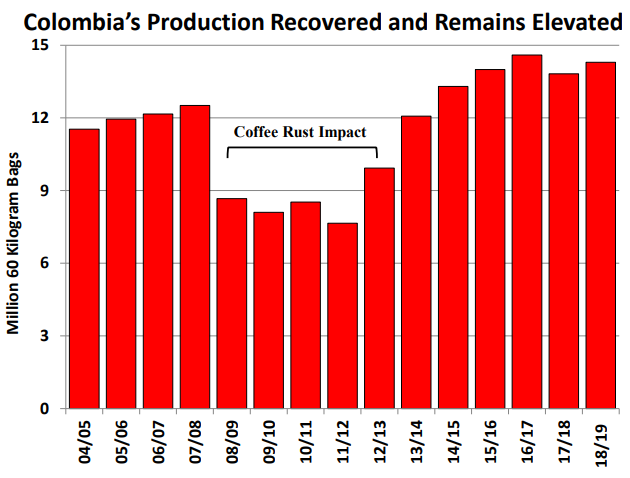 As a result of the increased production, the US Department of Agriculture expects the world ending stocks to increase by approximately 7.1 million bags of coffee to 37.1 million as of the 2018/19 period-end.

The largest importer of coffee, by far, is the European Union - it accounts for approximately 45% of the world's coffee bean imports. Its imports are forecast to increase by c. 1.1 million to 48.5 million bags. The United States occupies the second place in the list of the world's largest importers. The US is set to increase its imports by 2.1 million to 26.5 million bags.

The increase in imports of the two largest importers will hardly be large enough to meet the increasing production. As per the chart below, the production of coffee has been diverging from consumption which increasingly mounted the pressure on coffee prices. Due to the reasons discussed above, such trend is expected to continue in the current period (2018/19) as well as the following ones. Thus, in my view, the prices of coffee will remain depressed in the near future. 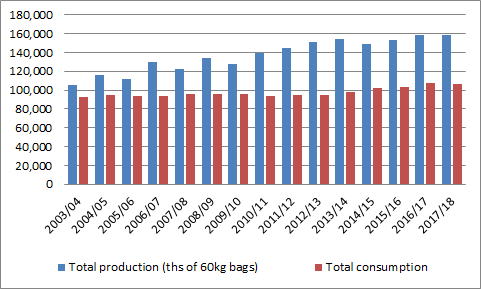 While my opinion on the coffee prices is pessimistic, I view JVA in a rather different light. Higher coffee prices would be a nice bonus for JVA, obviously, but the company is doing quite well even in the current market conditions. In my last article on the name, I raised a couple of points which I found somewhat worrisome. I think it's only fair to elaborate on the issues in this article to see what has changed in JVA's story.

In my previous note, I discussed the company's net sales and showed their decreasing trend in the past. This has been turned around by the company's M&A activity, and the management's attempts to grow organically as well. JVA has reported twice since my last article, and the chart below shows the increase in sales as well as the expansion of the operating margin.

The company has seen a fine improvement of both sales and the margins. Net sales continue to increase despite the weak coffee prices, and the operating margin, which has seen a second consecutive quarterly improvement, is suggesting a continuous improvement in the company's operations. It was the continued integration of the Steep & Brew business that stood behind the increase of net sales. The company reported organic growth as well, however. For 2018, the organic growth stood at 10.4% or $8 million. 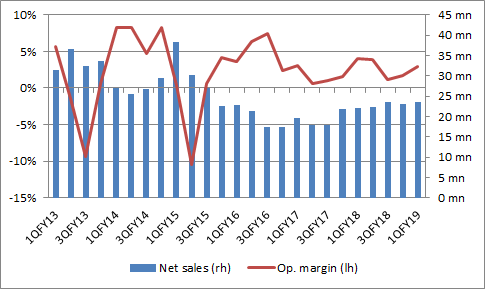 Things look good for JVA even in terms of the gross margin, an important indicator of a retail company. Below is a chart showing the gross margin increasing from c. 11.6% in 1Q FY16 to more than 19.3% in the last reported quarter (1Q FY19). This is despite the depressed coffee prices which I expect to remain low. Any factor which would help to support them at current levels or even increase them would serve as a good tailwind for JVA. In the near- to -mid-term, however, I would expect the low coffee prices to slow down the expansion of JVA's margins. 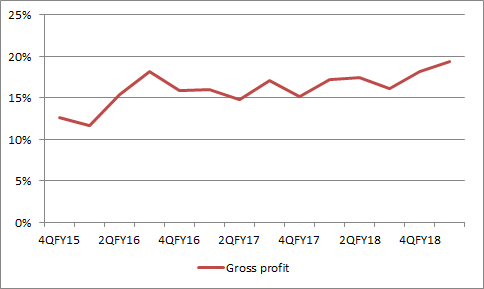 Cash generation and the line of credit

Another issue I discussed last September was FCF generation which had been quite volatile in the past. The company generated positive Simplified FCF (defined as net cash provided by operating activities less net cash used in investing activities) in the past 3 quarters - something JVA managed only back in 2013/14. While the Simplified FCF generated in 4Q FY18 and 1Q FY19 seems still rather low, things seem to be turning around. Steep & Brew operations helped to improve the generation, and I am excited to see the current quarter's FCF number because, in the past four second fiscal quarters, JVA reported a negative number. 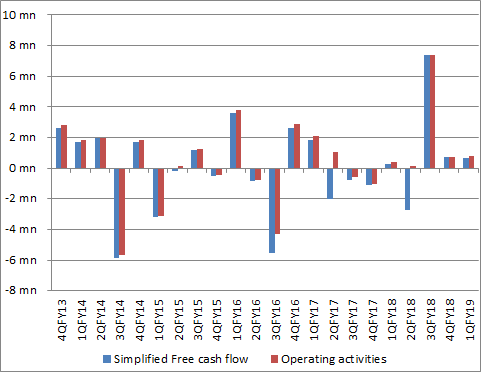 The company's cash generation and confidence are further proved by the decreasing line of credit, which consequently brings lower interest expenses and risk.

In January, the company's share price doubled. In his article, a fellow Seeking Alpha contributor Mark Krieger argued the gross margin expansion in 4Q of FY 2018 is behind the share price performance. Looking at the gross margin chart I show above, I agree with his reasoning.

I think, however, the market had become too excited, and that is the reason why the share price has somewhat decreased since then. The valuation of the company has jumped on the EV/EBIT and EV/EBITDA metrics to levels seen mid-last year.

I see the numbers reported for 1Q FY2019 as good and positive for JVA's story as the net sales grew c. 7% year on year, mostly on the back of the continued integration of Steep & Brew, margins are up (as discussed above), and EPS grew quarter on quarter. Looking at the year-on-year growth rates, the only drag that stands out is the almost 35% increase in the Selling and administrative expenses. The company says the increase was mostly caused by the acquisition of Steep & Brew as well as higher freight costs. For this reason, I believe some of these inflated costs may be regarded as being only one-off charges. If the selling and administrative expenses grew at the same rate like net sales, EPS would be around the $20 level. 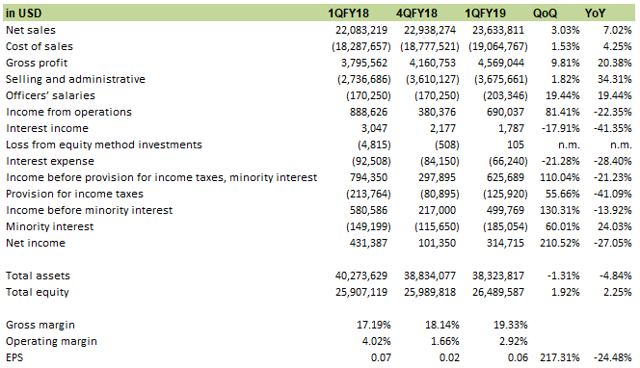 JVA's liquidity remains strong and is improving. The working capital increased circa $327 thousand (a second consecutive quarterly increase). The current, quick as well as the cash ratio not only remained high in the quarter but continued to increase as well (see the chart below). The reason I mention this is the fact that the Board has approved a dividend program again and expects the first pay-out to take place in the second fiscal quarter of 2020 from JVA's net income from the fiscal year of 2019. The improving liquidity increases the chances the dividends will be paid out.

Despite the current circumstances of the coffee market which lead to low coffee prices, which consequently partly offsets JVA's margin expansion, JVA manages its way in the market and grows its business both organically as well as through acquisitions. While my view of the short- and mid-term future of coffee prices remains pessimistic, JVA's outlook looks way more promising. The price of JVA doubled in January 2019 and remained quite high for some time. Currently, JVA trades at around $5.5 per share. I would regard the current price or any future weakness in it as a good opportunity to buy into the name.

David Lojkasek
99 Followers
I am a long-only investor mainly focused on small-cap companies which interest me for the lack of coverage and, hence, abundance of opportunities. I am a graduate of the University of Economics in Prague in Finance and Accounting, currently employed as an Equity Analyst in Prague, Czech Republic."Essentially, all models are wrong but some are useful." - George E. P. Box, one of the great statistical minds of the 20th century