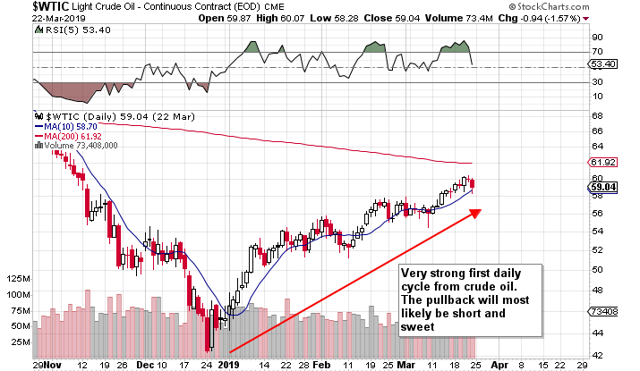 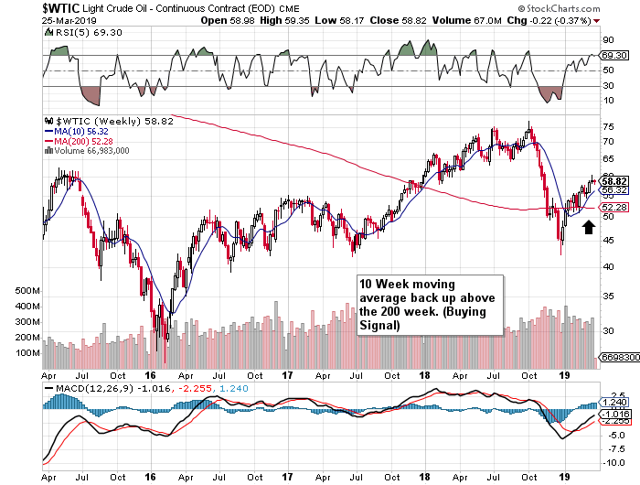 On the monthly chart, we have a monthly swing low and also at least a yearly cycle low also. Why? Because the last clear yearly cycle low in oil took place in June 2017. This means that the recent December low took place 18 months afterwards, which was a stretch to say the least. Therefore, considering the long timing band plus the sheer thrust of the rally out of the December low, we believe it will be only a matter of time before price takes out that 10-month moving average. When it does (this will be another buying signal), we will have confirmation of a brand new yearly cycle which started in December. 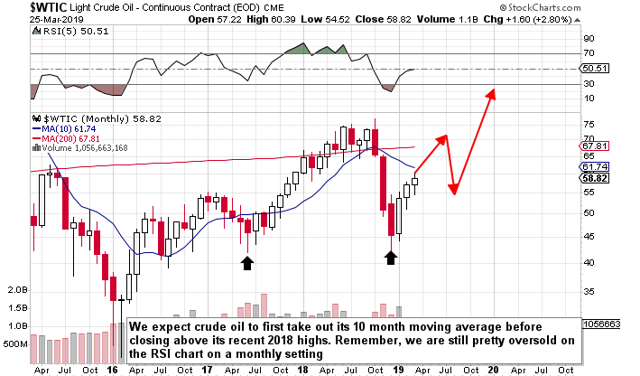 We have been monitoring both the CRB and equities for that matter in an attempt to gauge whether there is a possibility of both of these asset classes retesting their December lows. For example, many bears still believe that the recent December lows in stocks came too early which may be correct to a certain perspective. The CRB though for that matter cycles over a 3-year cycle whereas equities cycle over a 4-year cycle. Therefore, since commodities bottomed in early 2016, they were definitely in their timing band for a 3-year cycle low last December as shown on the chart below. Obviously, we need a convincing break of the 10-month moving average before we can confirm the CRB's 3-year cycle low. However, it looks highly probable (considering the strong rally over the past 3 months) that the 3-year low is in. 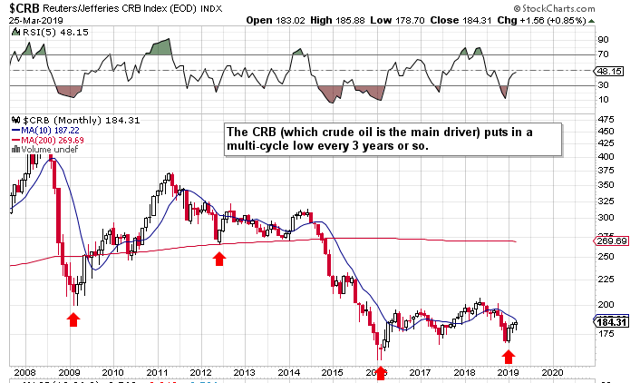 One word on fundamental analysis. It is obviously very important, but as chartists we believe that market action discounts everything. This basically means that any current fundamental event, such as OPEC cuts or US sanctions on Venezuela, has already been reflected in the charts. This is why we focus our research on price and chart patterns. Reasons why crude oil may rise or fall is secondary in our analysis.

Why? Because if the supply and demand situation changes drastically, this new trend will show up on crude's price action on the charts. We believe the fundamentals are bullish for oil as the commodity continues to make higher highs. Any potential negative piece of fundamental analysis concerning crude oil is secondary to crude's price action. It is all about supply and demand. If demand remains strong, price will continue to rise. If it is the contrary and the negative fundamentals gain the upper hand, price will fall off.

To sum up, asset classes many times print hard bottoms together. We continue to believe that we had this scenario play out in December of last year with crude oil and equities. Considering the high correlation we have seen between equities and crude oil over the past while, some fear seemed to enter the market when stocks, for example, fell over 60 handles last week in one trading day which again pressurized crude oil prices. From our research though, we continue to believe that all we had was some profit-taking in both asset classes. Let's see if crude oil can close above 10-month moving average over the next few weeks which will confirm its sustained rally.

Elevation Code's blueprint is simple. To relentlessly be on the hunt for attractive setups through value plays, swing plays or volatility plays. Trading a wide range of strategies gives us massive diversification which is key. We started with $100k. The portfolio will not not stop until it reaches $1 million.