Back in November 2018, I recommended Landmark Infrastructure (NASDAQ:LMRK) as a "spec buy" with a potential upside of 50-75% in the next 12-24 months. Year to date, LMRK has returned more than 46%, and since the bottom in December 2018, the unit price has increased by more than 58%. 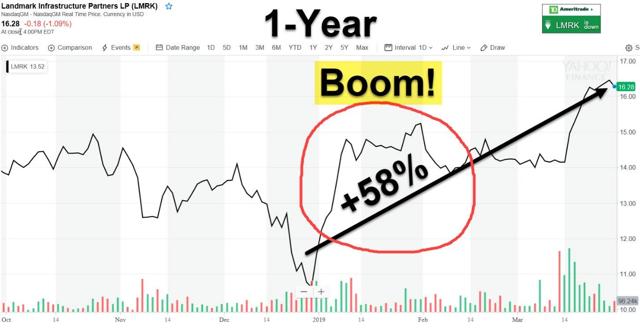 Despite the run-up in the unit price in the last three months, LMRK remains a buy-rated investment, with an attractive 9% yield and the units still trading at a meaningful discount to its peer group (LMRK at approximately 11x Price to forward AFFO vs. low 20x for tower companies and high teens for net lease REITs), which include the tower companies and net lease REITs.

In addition, as a result of the Brookfield Asset Management (BAM) JV transaction (a subsidiary of BAM) and the recent refinancing of the revolving credit facility, LMRK's balance sheet is improved with the capital raised from the transaction providing additional dry powder for higher cap rate and more accretive acquisitions.

Speaking of the Brookfield JV transaction, we believe that this transaction has been severely underappreciated by the markets. Setting aside the obvious benefits of raising capital at a lower cost of capital, delevering the balance sheet and strategically combining with a very strong capital partner, the implied valuation points to the significant discount at which LMRK trades.

Backing into the numbers provided in Landmark's historical SEC filings, from our calculation, the transaction was done at a low 5% cap rate. This cap rate is well below the historical cap rate of portfolios acquired by Landmark, which has ranged from the high 5% to as much as 7% plus.

Which brings the question as to what value the markets should place on LMRK's approximate 2,000 remaining assets, given the Brookfield JV transaction. I would conclude that a similar valuation on Landmark's remaining assets yields a unit price well north of the current unit price. This net asset value provides more than enough support for Landmark's current unit price and suggests significant upside for LMRK even after the recent run-up. 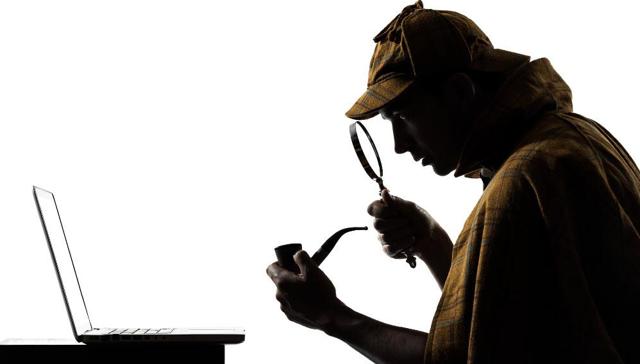 One of the most important jobs for a REIT investor is to dig deep into an underlying security with an emphasis on valuation. More specifically, we look for catalysts that drive valuation and ultimately provide user (and our subscribers) with superior performance.

For LMRK, we see potential near-term catalysts, including further progress being made on its distribution coverage ratio, as management expects coverage to reach 1x (from current 0.95x) sometime in the middle of 2019.

As this has been a sticking point with some of the Landmark bears, we believe that getting to a distribution coverage above 1x will help bring in new investors that have been waiting on the sidelines while also further justifying the current 9% yield.

We believe that the redeployment of capital that was raised from the Brookfield JV transaction, along with additional revenues from contractual rent escalators (greater than 2.3% on annual basis), lease modifications and renewals, should provide the accretion necessary to increase the distribution coverage.

Management is focused on the redeployment of capital on higher cap rate developments (FlexGridTM) and acquisitions, with the focus being on developments. FlexGridTM is also a near-term catalyst for LMRK.

As signed contracts with the mobile network operators are announced and the timing of revenues become clearer, the path to higher AFFO/distributable cash flow and the higher return profile of these type of assets will become more evident. In addition, new announcements with other real estate providers for FlexGridTM developments may also be impactful for LMRK as the company increases the pipeline of development projects.

Longer term, LMRK is planning on fully converting its structure into an internally-managed REIT from its current master limited partnership (or MLP) structure. This change is not expected to take place until LMRK can reach an adjusted EBITDA level of at least $150 million (compared to the current run-rate of approximately $65-70 million), or in about 2-3 years according to management.

We believe that this structural change will serve LMRK and its investors with several benefits, including a much lower cost of capital, higher institutional ownership, inclusion of LMRK in REIT indexes, and an improved corporate governance, among other benefits.

LMRK acquires, owns, and manages a portfolio of real property interests and critical infrastructure assets that are leased to companies in the wireless communication, outdoor advertising and renewable power generation industries. The company's real property interests and assets generate triple net lease rents, meaning they are not responsible for property taxes, insurance or maintenance and repairs, which, combined with organic growth from contractual rent escalators, lease modification, lease-up and renewals, lead to extremely high property operating margins, approximately 98% in 2018.

As seen below, LMRK's portfolio is comprised of attractive and well-known tenants that include many Tier 1 tenants (large publicly-traded companies), including the big four wireless carriers, big three tower companies, and big three billboard companies. No single tenant accounts for more than 13% of its revenue: 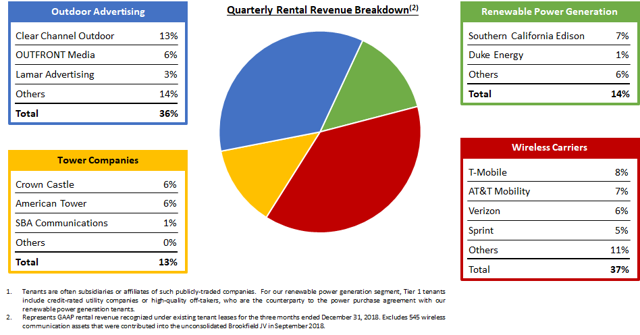 LMKR is well-positioned to take advantage of the expected growth in wireless network spending and transition to 5G, with the development and deployment of its FlexGridTM solution, which is a self-contained, neutral-host smart pole designed for carrier and other wireless operator colocation.

The colocation economics is comparable to the model for publicly-traded tower companies where one tenant on the pole generates an adequate return on its investment, but to the extent that a second and/or third tenant is able to collocate on the same pole, the incremental margins and returns are extremely high due to minimal incremental costs of placing the second and/or third tenant on the same structure.

In terms of specific deployments, LMRK is currently working on a number of projects, including the Dallas Area Rapid Transit (or DART) project, a commercial project in partnership with a Canadian commercial real estate owner, and a project to deploy FlexGridTM in the City of Lancaster, a municipality in the suburbs of Los Angeles.

LMRK expects FlexGridTM to be a significant source of its 2019 growth, with rental revenue from FlexGridTM anticipated to commence later in 2019 and activity accelerating in 2019. 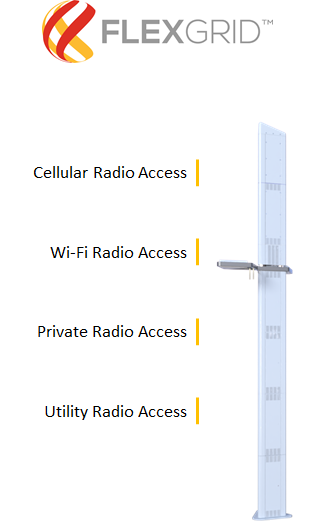 In Q4-18 LMRK refinanced its revolving credit facility into a new 5-year facility with borrowing commitments of $450 million. The facility bears interest at a rate equal to LIBOR plus a spread of 175-225 bps, depending on leverage.

When combined with the recent Brookfield JV transaction in September 2018, LMRK's balance sheet is in excellent shape for growth in 2019. Debt to Adjusted EBITDA as of Q4-18 was at approximately 6.5x, or at the lower end of the company's target levels. Essentially 100% of its debt is fixed rate debt or fixed through interest rate swaps, and LMRK now has additional dry powder to fund more accretive higher cap rate acquisitions and FlexGridTM developments.

In Q4-18, AFFO per diluted unit was $0.35, compared to $0.32 in Q4-17. Adjusted EBITDA (which excludes several non-cash items including gain on sale of real property interest, unrealized loss on derivatives and acquisition-related expenses) increased to $16.0 million, an increase of 13% year over year; Adjusted EBITDA increased 26% year over year (pro forma if assets included in the Brookfield JV were consolidated).

The increase in AFFO and adjusted EBITDA was principally due to the acquisitions completed over the course of 2017 and 2018 as well as organic growth generated from the portfolio.

In Q4-18, LMRK's coverage ratio improved sequentially and year over year, with the company making good progress in restoring its distribution coverage back to above 1x and expecting to accomplish this goal around the middle of 2019.

Clearly, LMRK investors (including me) deserve a victory lap, and I am thrilled to see my comment last year - "this appears to be the home run pitch of the year" - paying off. LMRK hit the ball out of the park, and this proves that, by paying close attention to catalysts, investors can reap sizable rewards.

For the record, LMRK is a small-cap stock, and investors should always maintain adequate diversification to protect against volatility. Unlike Uniti Group (UNIT), LMRK has sound operator diversification, so I am not as fearful of these risks. In our view, the dividend coverage is the greatest risk, but as noted above, the company is making good progress in restoring its distribution coverage. 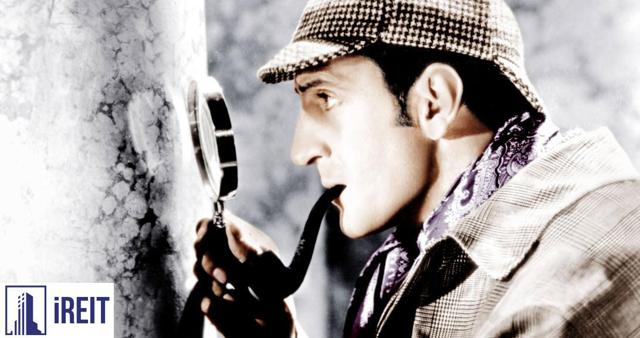 Author's note: Brad Thomas is a Wall Street writer, and that means he's not always right with his predictions or recommendations. That also applies to his grammar. Please excuse any typos, and be assured that he will do his best to correct any errors, if they are overlooked.

Finally, this article is free, and the sole purpose for writing it is to assist with research, while also providing a forum for second-level thinking.

"Your articles should be mandatory in High schools and Colleges, as a separate subject on real estate investments."

"Always well-written, factual, and very entertaining, and you did it the hard way."

"Brad is the go-to guy, with REITs. Wonderful info, he has provided great ideas, on which I read & perform my own DD."

"Brad Thomas is one of the most read authors on Seeking Alpha and he has developed a trusted brand in the REIT sector."

We are providing this special offer so you can sleep well at night...

Disclosure: I am/we are long LMRK. I wrote this article myself, and it expresses my own opinions. I am not receiving compensation for it (other than from Seeking Alpha). I have no business relationship with any company whose stock is mentioned in this article.