Monday April 1: Five things the markets are talking about

Will we see the same in Q2?

Optimism about trade talks among the world's two largest economies coupled with the Fed signaling a temporary halt to interest-rate hikes pushed some stateside equity indexes to their best Q1 in a decade, and this despite investors grappling with slowing global growth and the uncertainties surrounding Brexit.

Better manufacturing data out of China over the weekend has helped push equity markets into to the 'black' on day one of a new quarter. With a plethora of central banks turning more supportive for markets by extending their expansionary monetary policies, a number of investors have been fearful of missing the move.

Note: The Caixin-Markit China manufacturing purchasing managers index rose in March above 50 to 50.8.

Providing more investor confidence is the fact that the yield on US 10-year Treasury's has backed up +3 bps to +2.446%, climbing back above the yield on three-month T-Bills and ending the inversion of the yield curve that last week signaled the possibility of a recession in the market.

The UK Parliament is expected to vote today on a short list of options for how the UK could leave the EU, including perhaps one that combines a customs union pact with a second referendum. There is talk of a possible third general election in four-years gathering steam. Minus a deal, Britain is set to crash out of the EU on April 12 with expected "dire financial consequences."

In Japan, the Nikkei has rallied on day one of the new fiscal year overnight as hopes for Sino-US trade talk hopes and factory activity surveys lifted China-related stocks, helping to offset weak domestic corporate sentiment. The Nikkei share average ended +1.4% higher, while the broader Topix closed out +1.5% higher.

Down-under, Aussie shares closed at a three-week high overnight, after Chinese factory surveys on the weekend supported broader investor sentiment, with miners notching strong gains on firm iron ore prices. The S&P/ASX 200 index rose +0.59% at the close of trade. The benchmark was little changed on Friday. In S. Korea, the Kospi index gained +1.3%.

In China, stocks jumped overnight with the Shanghai Composite Index hitting its highest in 10 months, while blue-chips touched a 12-month peak, on signals of an economic recovery (see below) and the progress in Sino-U.S. trade talks. The Shanghai Composite and the blue-chip CSI300 indexes closed up +2.6%. While in Hong Kong, shares rose to their highest point in nine-months. At the close of trade, the Hang Seng index was up +1.8%.

In Europe, regional indices trade higher across the board with positive PMI data out of China providing global equities the 'bid.' 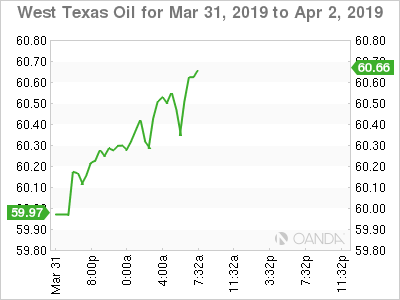 Oil prices have rallied overnight, adding to their Q1 gains when the major benchmarks posted their biggest increases in nearly a decade, as worries about supplies outweigh uncertainties of a slowing global economy.

Also providing support to 'black gold' is the encouraging data out of China on the weekend. Positive Chinese factory gauges and signs of progress in Sino-U.S. trade talks is lending a hand.

US sanctions on Iran and Venezuela along with supply cuts by OPEC+ have helped support prices this year, overshadowing concerns about global growth and the Sino-US trade war.

Crude oil bears believe price gains will be capped by potential softness in the global economy as well as the ability of US oil producers to ramp up production when prices spike.

However, providing support is that US production has also steadied, data Friday showed that US domestic output edged lower in January to +11.9M bpd. Also, according to Baker Hughes energy services US energy firms last week reduced the number of oil rigs operating to the lowest level in 12-months, cutting the most rigs in a quarter in three-years.

Ahead of the US open, gold prices have inched down as investor appetite for riskier assets has improved a tad on signs of progress in trade negotiations and stronger economic data. Spot gold has slipped -0.1% to +$1,290.98 per ounce, after touching its lowest since March 8 at +$1,286.35 in Friday's session. US gold futures are down -0.3% at +$1,294.90 an ounce. 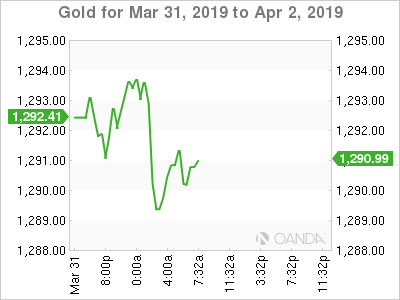 The German 10-year Bund yield fell -26 bps in March into negative territory in their biggest monthly fall in three-years.

This weekend's data has brought some calm back to global markets.

China's Caixin/Markit Manufacturing Purchasing Managers' Index (PMI) expanded at the strongest pace in eight-months in March, rising to 50.8 from 49.9 in February - the strongest print since July 2018. 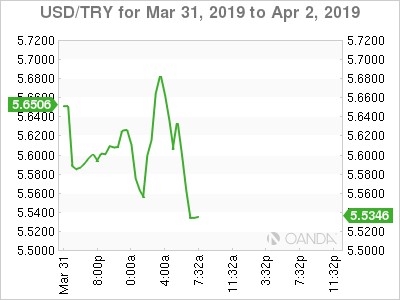 Turkey President Recep Tayyip Erdogan has supposedly lost control of the capital, Ankara, in local held elections yesterday, which has sent TRY to a one-week low of TRY5.6860. It's suggested that Erdogan limited access to TRY last week to prevent speculators from "shorting" it and devaluing it before the elections, in fear that his party AKP may lose the majority in the capital.

Note: Both Erdogan's party and the opposition party claim to have won the majority of Turkey's largest city, Istanbul. The lira has managed to retrace some of its losses, with USD/TRY last up +0.4% at 5.6169.

A stronger-than-expected UK manufacturing purchasing managers' survey sent sterling only briefly higher this morning, with GBP/USD rising to £1.3090 from £1.3074 beforehand. The PMI rose to a 13-month high of 55.1 in March, from 52.1 in February. Market consensus was looking for a fall to 50.9. The increase largely reflected Brexit-related stockpiling, with stocks rising at record rates. EUR/GBP is last flat at €0.8600.

EUR/USD is steady despite data this morning showing that Eurozone inflation missed expectations and remains below ECB target for the fourth consecutive month (see below). The pair is hovering around €1.1245. 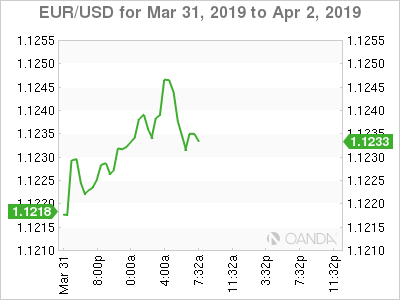 The annual rate of inflation in the eurozone fell further below the ECB's target last month, even as unemployment continued to fall and energy prices rose.

According to the European Union's statistics agency this morning, it said consumer prices in the 19 countries that use the 'single unit' were +1.4% higher than a year earlier, a decline from 1.5% in February.

However, more concerning for the ECB is the decline in the core-rate of inflation - which excludes food and energy - to +0.8% from +1% in February, its lowest level in 11-months.

The fall in the core rate leaves it far from the ECB's target of just under +2%, and reflects slower price rises for both services and manufactured goods. 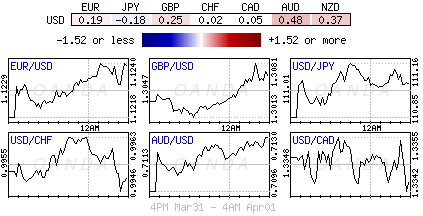