Here we are, again, standing at the fortified wall built by the Bears (aka the Rally-Sellers) back on September 20, 2018. The Bulls (aka the Dip-Buyers) are determined to punch a hole in the wall and release their thundering herd into the breach. The Bears are prepared to push them back, again, and protect the wall.

Origin of the phrase

​This phrase appears in Act III, Scene I of Shakespeare's play, Henry V. The scene begins in the middle of the blockade of Harfleur as King Henry's army has blown up some French fortifications. He encourages his army to attack the city again by uttering these famous lines: "Once more unto the breach, dear friends, once more; / Or close the wall up with our English dead."

The literal meaning of this phrase is, "let us try one more time," or "try again." King Henry speaks this phrase to encourage his soldiers, who are launching an attack on through a gap or breach in the walls of Harfleur.

His troops disrupt the gap in the city walls and fight against the defenders. On the other hand, the king urges them to attack again and demonstrate courage.

Here "breach" means gap, and by "unto" we mean "into." In common expression, this phrase implies that one goes into the battle again, no matter whether it is a real battle in the battlefield, or a battle in daily life; one should always try again.

Now that I've beaten this metaphor nearly to death, what's the relevance to this juncture in market history? The first and most obvious is that we are now just a stone's throw of breaching the old high of 2,930 on the S&P 500. The Bulls could achieve this tomorrow, if they have the will to do so. Or, it might take a few days or weeks to summon the strength to push through this significant resistance level.

One thing is certain. The Bears will not go quietly into this good night. They will put up a fight and defend the wall at all cost. It's shaping up to be a classic battle of wills between the two camps, and we all have a ringside seat.

Other forces at work

There are other forces at work that should be pointed out. First, there is the issue of weakening corporate profits. This isn't an opinion, it's the consensus of professional analysts who do this for a living. The Bulls will tell you that the market can, and will, look past this earnings slowdown and carry on to make much higher highs before the bull is finally put out to pasture.

The Bears will tell you that corporate earnings are slowing for good reasons. The injection of adrenaline from last year's tax cuts have begun to wear off. "Where is the next stimulus going to come from?" they will ask.

Valuations are another issue. Bulls say that the market is fairly valued, and they might be right. But the Bears have more data to support their view that valuations are stretched. I tilt towards the Bears on this one.

The flattening (inverting?) Treasury yield curve is troublesome at best and a significant warning of recession at worst. In my opinion, discretion is the better part of valor, and I'm raising cash in stages in client accounts.

Bulls point out that the Fed has now backed down from its mission to shrink its balance sheet and raise short-term interest rates. A dovish Fed is good for the stock market, as the story goes, but what about the mountain of debt and the exploding deficits that have been happening lately? Is there a limit to how much debt the U.S. can handle before inflation rears its ugly head? If you listen to the Bulls, the answer is "no." Deficits don't matter, as Dick Cheney informed us during the Bush administration.

This idea of unlimited debt, via printing money, has caught on amongst our fearless (feckless?) leaders in Washington. Nobody appears to have the courage to stand up and say, "Enough already!" But that's what they should be doing. It feels like we're riding a huge gravy train where there is no limit to how much we can spend because we just put everything on Uncle Sam's credit card. If you believe this, maybe you should take a night class in macroeconomics. Your company will probably pay for it.

The Breach in pictures

It's always helpful to use pictures to illustrate your point. That's coming next.

Chart 1 is a snapshot of market drawdowns over the last 12 months. It illustrates that we've been here before, in September of last year. The market had topped out at 2,872.87 in January 2018, and then hit an air pocket that took it down more than 10% in just 9 trading days. That set the low point (support level) for the run-up to September 20th, 2018. That support level was subsequently breached, and a new support was established at 2,351 two months later.

Chart 1. Drawdowns over the past 12 months 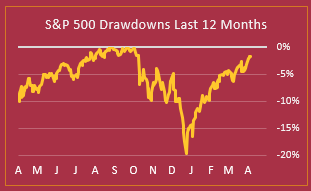 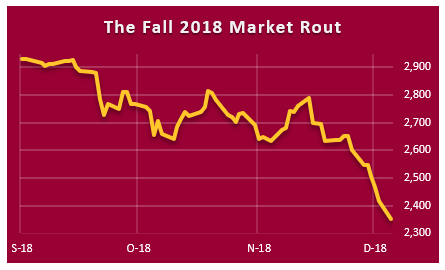 We have clawed our way back from that low point to where we are today - less than 2% from the previous high. Chart 3 shows the entirety of the Christmas rally from low to today. We are up 22.5% from the low that was set on Christmas Eve.

Chart 3. Once More Unto the Breach 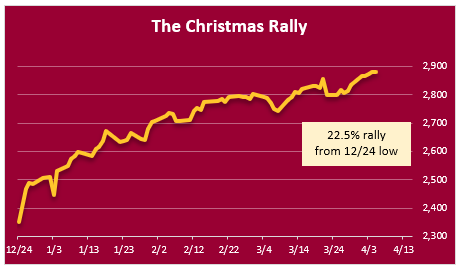 Whether you're on the side of the British soldiers bravely charging ahead under the command of Henry V or the French soldiers vigorously defending their heavily fortified wall against a potential breach, this is an interesting battle of will and determination.

One of the questions I've been asking myself lately is this: "What happens after the wall is finally breached?" There can be no doubt that eventually it will happen, but what comes next? Experienced investors have considered this question, and many of them have a good idea about how much upside the market has and how much downside.

This risk-reward ratio is a cornerstone of investment theory. Surprisingly few retail investors have an answer to my question when I ask them for their assessment. I have my own opinion, of course, but the only opinion that matters is your own.

I believe that there is twice as much downside than upside right now. That doesn't mean I'm out of the market, but it does mean that I'm reducing my risk profile and I'm ready to become aggressively defensive as this battle plays out.