This pro-to-pro macro conversation is a must-watch.

As she explains in the brief excerpt transcribed from the interview below:

"First of all to say, 'We're getting a recession' to me that's dumb. I don't know why that is seen as such a bombastic view. That's what happens at the end of a cycle."

The duo covers a lot of ground including why investors should be concerned about an "earnings recession" and possibly even economic recession over the coming quarters.

Liz Ann, I'm looking at the questions our viewers are asking, and it looks like everyone's asking you about the inversion of the yield curve. I definitely want your perspective on that because you study the history of markets.

Liz Ann Sonders: This is normally what happens when you get toward the end of a cycle. So yeah, there's nothing terribly unique about the yield curve inverting. But everyone panics about these things.

McCullough: I think it's because it's new or it's the latest thing to talk about.

Sonders: It's been a long time since it was last inverted, right? So you have to go back to mid-2007 which was at the end of the inversion that began in 2006.

So, it is by far the longest period in the modern era we've gone without an inversion. But that's tied to the fact that if we get to July without a recession, it will be the longest expansion ever.

But you know it's the natural order of things.

When the Fed tightens policy, then they back away, the long end starts to discount the coming downturn and you invert the yield curve. Then a recession comes and you start the process all over again.

McCullough: Let's talk about the Fed and their decisive decision this week and how that fits into inversion.

Sonders: The decision was not only around going into pause mode, which they did from December to January - but the announcement they made about the balance sheet not just the runoff broadly but taking the runoff of mortgage-backed securities and moving them into Treasuries which is almost a kind of a de facto pseudo-QE thing.

And then you add to that the incredible weakness that we've seen outside the United States. The PMI report we got out of Germany on Friday.

Sonders: You already were in negative yielding territory across parts of the rest of the world. That boosts demand for Treasuries which, surprise, surprise, when you boost demand for something, it brings the yield down.

So the combination of what the Fed did both on the rate part of the decision tree but also on the balance sheet and then you look at weakness in U.S. growth and weakness in global growth and the impact that had on buying interest and in Treasuries and you mix it all together and that's a recipe for inversion.

McCullough: So we're talking about it being very late cycle, the Fed going from hawkish with rate hikes to what we at Hedgeye called the triple dovish pivot. I mean you basically had policy gone dovish three times incrementally since the last rate hike. So what does this Fed look like when the curve is inverted? Don't they have to just cut?

Sonders: Well, yeah the market is telling you that there's a 60% likelihood of a cut this year.

McCullough: That went up in a hurry.

Sonders: I can think of a scenario under which the Fed probably has to hike here and that would not be a great scenario for risk assets. The scenario is they have to raise rates in a stagflation-type of environment. If you see tightness in the labor market move into more traditional measures of inflation and you get that in conjunction with a still slowing economy, it's kind of again worst-case scenario to the extent it forces the Fed to move.

McCullough: Let's go back to the sell-off in the fourth quarter. I can go back and show you every single time the Fed has tightened into a Quad 4 environment (U.S. Growth and Inflation slowing) and after that Quad 3 (U.S. Growth slowing and Inflation accelerating) exposures go completely bananas like right now.

If I went through every single data point in our predictive tracking algorithm which includes everything in GDP, you'd see the rate of change started slowing in October. We continue to slow, so growth slowing has indeed been the causal factor all along. And I still see a lot of people say, "Well, that was a one off; it's all priced in including the earnings slowdown," which also peaked in the third quarter.

Sonders: You saw the peak in the leading indicators in September. Within a month or two, in either direction, almost all the subcomponents of the leading index rolled over. You saw the significant tightening in financial conditions, which was one of the contributors to the rolling over and earnings expectations for 2019.

There's so many hits to earnings looking ahead in 2019; that's the simple math of the way year-over-year comps work. You have a tax cut passed into 2018. You don't have it again in 2019. You saw the strength in the dollar and the impact on exports. You saw weak global growth, especially in Europe which is a bigger driver of S&P sales than in China. You obviously had the trade war with China and you had the collapse in oil prices.

McCullough: We'll show on slide 70 exactly what Liz Ann just pointed out. I mean it's great to be able to talk to somebody who knows every numbers inside out.

Wall Street is now expecting a positive Q1, but it's magically going to re-accelerate by Q4. I mean I have earnings down like 7 to 9 percent throughout the second and third quarter year over year. So that's how I think you can get a more expensive market on the way down. Right. And I can't for the life of me understand why someone would like financials here. I don't like them because financials went from 31% growth to 3% in the last two quarters. They haven't even comp'd the tough comps yet. Like what does Jamie Dimon have to do in the third quarter of 2019?

If earnings are down 5 to 10% year-over-year, the precedent for that is buy stocks?

Sonders: I think if there were an instance where we could get an earnings recession absent an economic recession at some point, the market becomes buyable. I just don't think we're likely to see those two divorced this time really.

Sonders: Yeah, well first of all to say "We're getting a recession," to me that's dumb. I don't know why that is seen as such a bombastic view. That's what happens at the end of a cycle. 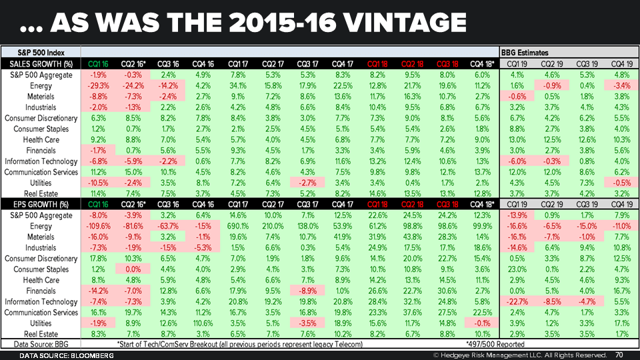 Hedgeye
2.86K Followers
Hedgeye Risk Management is an independent investment research and online financial media firm. Focused exclusively on generating and delivering thoughtful investment ideas in a proven buy-side process, the firm combines quantitative, bottom-up and macro analysis with an emphasis on timing. The Hedgeye team features some of the world's most regarded research analysts - united around a vision of independent, un-compromised real-time investment research as a service. We measure ourselves on our core values: Transparency, Accountability, and Trust.
Follow