In a previous blog post, GR-MD-02: Keytruda’s Partner, I outlined the rationale and mechanisms for galectin-3 blockade using Galectin Therapeutics' (NASDAQ:GALT) GR-MD-02 to improve clinical results of checkpoint inhibitor (anti-PD-1) therapy. There have been two highly significant developments in this field of interest to investors.

Firstly, at a recent Keystone conference, the Earl Chiles Center presented new Mechanism of Action (MOA) and overall survival data from its melanoma and head and neck cancer trial utilizing GR-MD-02 as a galectin-3 blocking agent in combination with Merck’s (MRK) Keytruda.

The combination was well-tolerated without any adverse events from GR-MD-02. The trial is being extended with the most efficacious dose, 4 mg/kg (Cohort 2 in red), which is also the same dose being used in the phase 3 NASH RX trial. The graphic and links below summarize the clinical results. 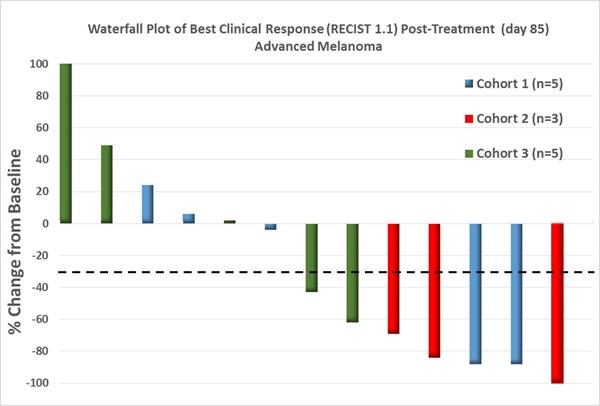 In addition, there was a significant decrease in myeloid derived suppressor cells (MDSCs) in responders to therapy. Recent research suggests that galectin-1 and 3 are involved in MDSC recruitment [1,2] and that MDSCs are a powerful force of immune suppression and nonresponse in I/O therapy [3,4,5]. Readers familiar with my articles may also recognize that Anixa Biosciences’ (ANIX) Cchek diagnostic hinges on identifying MDSC populations in the blood. MDSCs are now recognized as a useful biomarker to detect cancer.

Secondly, on March 31, 2019, a group from Rome and Stockholm published the clinical research study entitled “Predictive Biomarkers for Checkpoint Inhibitor-Based Immunotherapy: The Galectin-3 Signature in NSCLCs.” While this particular study does not address the question of causation, other recent data [6,7] shows that “galectin-3 has a strong regulatory effect on cancer-related inflammation and could present a key target in the management of lung, and potentially other galectin-3–driven carcinomas, in combination with immune checkpoint blockade.”

In this article on non-small cell lung cancers, the authors looked at 34 consecutive patients who were treated with checkpoint inhibition, specifically pembrolizumab (Keytruda) therapy, and then looked at their initial biopsies and stained them for galectin-3. They observed a large majority of patients (about 90%) with high galectin-3 tumor expression (score 3+) who showed an early and dramatic progression of disease after three cycles of therapy. In stark contrast, those with negative or low/intermediate expression of the disease showed an early and durable response to Keytruda, indicating galectin-3 as a predictive marker of tumor responsiveness. The researchers call this the “galectin-3 signature.” A summary graph of the patients’ responses divided into two groups – those with high versus low galectin-3 levels is inserted below. 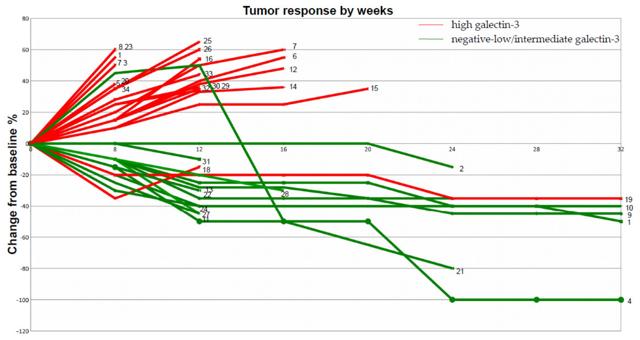 In addition to encouraging reports of galectin-3 in cancer, Galectin Therapeutics is now moving forward with its phase 3 trial in NASH cirrhosis, NASH RX. The study is slated to begin later this year, which would be over 18 months since the NASH CX top-line results announcement date. What took so long? Well, it appears that Galectin is benefitting from recent updates to FDA guidance for NASH clinical trials [8]. By waiting to start Phase 3 after the new FDA guidance, the company will now have a trial that is very well designed, with most relevant and updated endpoints.

Behind the scenes of this new FDA guidance, the Liver Forum and the NASH Education Council are two separate but collaborating entities that are still revising recommendations based on studies that are finishing. Additionally, a very recent webinar with NASH Key Opinion Leaders explained that even the KOLs are learning a variety of ways to improve NASH trials as trials are completed, such as grappling with what proper endpoints should be.

Taken together, these two recent clinical studies, from two different groups in different cancers, paint a powerful picture of the need to block galectin-3 while using checkpoint inhibition. The response differences in the NSCLC patients could hardly be clearer, as well as Galectin’s initial results with GR-MD-02 in combination with Keytruda, especially with the (likely) optimal 4 mg/kg dose.

Please refer to “The Role of Galectin-3 In Modulating Tumor Growth and Immunosuppression In the Tumor Microenvironment” (Farhad et al) or my previous blog post for more details of the mechanisms of galectin-3 in cancer.

Immuno-oncology represents the future of cancer therapy. We are just beginning to unravel the mysteries of the tumor microenvironment (TME) where the battle of our T cells versus the cancer takes place. Galectin-3 has emerged as an important guardian of the tumor microenvironment and now more clinical studies are backing up this data. This is potentially great news for cancer patients. 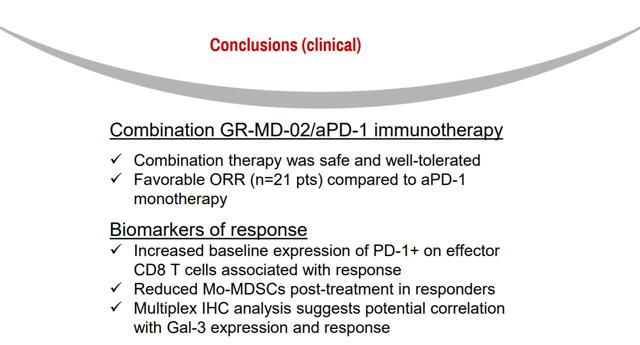 For an investor in Galectin Therapeutics, these findings represent a compelling reminder of the investment thesis. GALT has a NASH program that is about to embark on a Phase 3 trial in compensated cirrhosis. Recent competitors in that area, including Gilead, have not had any success. The company is chaired by multi-billionaire Richard Uihlein, who has recently extended a subscription rights offer to investors as money is being raised to further extend these studies. The Chairman of the Board is personally investing $20 million of his own money into the company.

The current market capitalization of ~$200 million is laughable given the company’s great chances in NASH (potential $20-35 billion industry per some estimates) and immuno-oncology (potential $125 billion industry). While Galectin is considered by most to be a NASH company, one has to ponder the robust recent research and clinical and preclinical data from multiple sources on galectin-3 in cancer immunotherapy, along with GR-MD-02’s impeccable safety profile and the immunotherapy market projected to eclipse the NASH market in size.

Given the recent data in immuno-oncology, I expect the rights offer to be oversubscribed. I would recommend getting in now before Wall Street understands the true implications of galectin-3 blockade. Investors wishing to participate in the rights offering will need to already be shareholders. This company is about to enter into a phase 3 trial for NASH cirrhosis with very limited competition. It would make sense if GALT traded at a similar market capitalization as other leading phase 3 NASH companies such as Genfit (GNFT), Madrigal (MDGL), or Intercept (ICPT). Even with moderate dilution of a rights offering, GALT would be substantially undervalued compared to peers.

Galectin is well-capitalized with a very favorable $10 million LOC from Uihlein and a low cash burn, about enough to last the company another year under current operations. However, as it is about to begin the NASH RX phase 3 trial, cash burn will increase significantly above the current ~$3 million per quarter. This increase is being funded through a subscription rights offer to current shareholders, so the probable dilution is already known. Investors who wish to benefit from the subscription rights need to buy in first. Richard Uihlein intends to minimize dilution damage to all shareholders with this rights offering, which would normally be an event reserved for institutions. With Uihlein chairing the company, I expect funds to be very well managed even as the company completes the rights offering, well-funded. Risks may also include NASH RX trial failure, as about 1/3 of phase 3 trials miss primary endpoints. This is an inherent risk with any clinical stage biotech company.

Disclosure: I am/we are long GALT. I wrote this article myself, and it expresses my own opinions. I am not receiving compensation for it (other than from Seeking Alpha). I have no business relationship with any company whose stock is mentioned in this article.