With earnings expected to climb just 3.6% in 2019 and PE multiples above both the 5-year and 10-year average, how is the S&P 500 (SPY) expected to generate a total return of almost 10%? That figure is divided up into roughly 7.5% of price gains to a level of 3096, based on consensus estimates, and roughly 2%+ of dividends. But with earnings expected to be up just 3.6%, analyst estimates imply that the multiple will expand even further above the 5- and 10-year averages.

While I am bullish on US equities, a closer look at analyst estimates casts some doubt on how equity market returns will play out this year if the analyst estimates are correct. One possible explanation is that analysts or companies are sandbagging. Companies generally outperform their guidance and analyst estimates do rely heavily on company guidance.

The average earnings decline estimate for Q1 as of March 30th was -4%. If we apply the 3.7% average increase then the actual decline for the quarter would only be -0.3%. That might drive up the CY EPS estimate, which would then make it more palatable that the S&P will reach 3000.

The other interesting point to note is that the average actual vs. estimated earnings over the last 5 years has been a 4.8% upside surprise. If that holds true then EPS growth in Q1 would be slightly positive. Will this happen again or will we see the first decline since Q2 2016?

A Look at the Numbers

At a CY EPS of $168.13, the PE multiple for the S&P would have to be 18.42 for the index to reach 3096. That's a 12% premium over the 5-year average multiple of 16.4 and a 25% premium over the 10-year average. That doesn't mean it's not possible. There have been several occasions when the forward PE ratio has been well above its long-term averages and has continued to expand. 2017 was a great example of this, as the multiple expanded from just above 16 to over 18.5. It is somewhat disturbing, however, that a mere 7% multiple expansion puts the multiple back at a 10-year high.

The chart below also highlights how the 10-year average came to be. From 2009 to 2014, the PE multiple remained below the average, but has remained above it for the last 5 years save for a couple of instances when it briefly dropped below it. If a reversion to the mean is imminent, then we need more robust earnings growth. 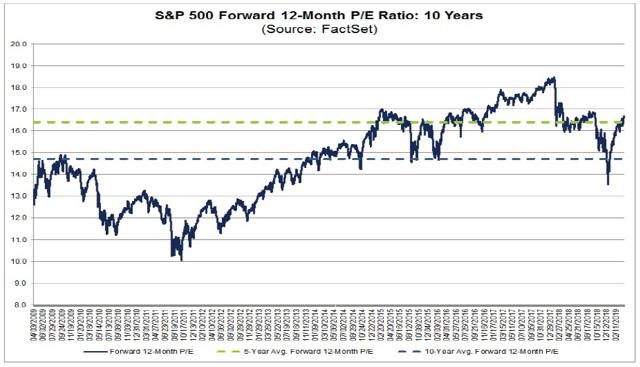 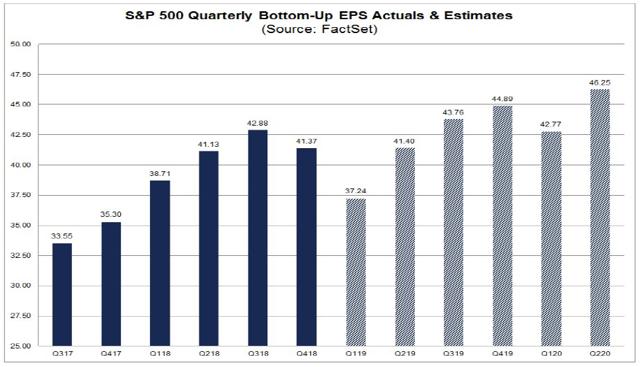 So what does the rest of the year hold for the S&P 500 and what does each scenario look like? As we already mentioned, in order for the S&P 500 to reach the analyst consensus of 3097 if the consensus EPS estimate is accurate, the PE multiple must expand to a 10-year high of 18.4. Quite possible, but not likely, and we certainly aren't pinning our hopes on that. The more likely scenario and our base case, is that EPS growth estimates end up being too conservative. 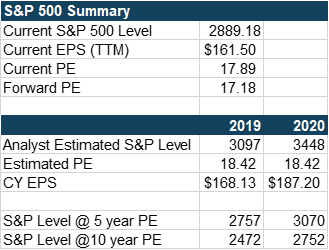 As mentioned earlier, actual earnings reported by S&P 500 companies have exceeded estimated earnings by 4.8% on average over the last 5 years. During this period, 72% of companies reported actual EPS above the mean EPS estimate. If we apply this average to the current average EPS growth rate of 3.6%, we arrive at EPS growth of 8.4%, or $174.42. The resulting TTM PE ratio would be 17.7 – still high but much more reasonable. Moreover, 74% of the companies issuing guidance for Q1 have issued negative guidance – lowering expectations and setting the bar nicely for an upside surprise.

Our base case is that the S&P 500 would end 2020 somewhere between 3313 and 3448, and likely to be closer to the top of the range if actual versus estimated earnings differences play out as they have historically. Despite approaching the longest expansion ever, we believe the S&P 500 still has more upside, albeit the next leg up will be more challenging and be more sensitive to negative news.

Investors should maintain their allocation to the S&P 500 for now but watch earnings announcements closely for any indications that actual results may disappoint. If they do, we believe it could invoke a short-term panic even if EPS estimates for the rest of the year remain intact.

We are changing the name of our service to reflect member feedback and strong influence from prospective subscribers. Our new service will include all of the features in our current service, plus:

Arturo Neto, CFA
10.98K Followers
I have been involved in financial services for almost 30 years. When I first started focusing on financial planning and money management it was out of a first-hand experience watching friends and family having to work well past retirement age because they hadn't saved or invested enough. Eventually I landed in a family office worth hundreds of millions of dollars where I was able to see 'how the other half lived' so to speak. I now operate a wealth advisory firm and publish articles on Seeking Alpha for DIY investors that prefer to manage their own money. As publisher of The Income Strategist, a premium subscription service on SA, my goal is to guide investors on how best to generate income from their investments. The service includes several income portfolios with different strategies that members can use independently or in combination. As part of the service, I also collaborate with other SA authors to provide broader and deeper coverage of investing. In addition to being a Chartered Financial Analyst, I am also a Certified Private Wealth Advisor and have an MBA from the Darden Graduate School of Business at the University of Virginia. I also hold a Master of Science in Finance and Bachelors in Finance from Florida International University. Having lived in Miami almost my entire life, my family and I relocated to Nashville, Tennessee in May 2018 in the pursuit of a better lifestyle and southern hospitality. If you're ever in the area, please do reach out. I'm happy to be teaming up with the following expert analyst contributors:1. Dilantha De Silva2. The Belgian Dentist

Additional disclosure: This article is meant to identify an idea for further research and analysis and should not be taken as a recommendation to invest. It does not provide individualized advice or recommendations for any specific reader. Also note that we may not cover all relevant risks related to the ideas presented in this article. Readers should conduct their own due diligence and carefully consider their own investment objectives, risk tolerance, time horizon, tax situation, liquidity needs, and concentration levels, or contact their advisor to determine if any ideas presented here are appropriate for their unique circumstances.