Because inflation increased 0.70% (rounded from 0.698%) over that period, the I Bond's new variable rate will be set at 1.40%, boosted by two recent months of relatively strong inflation. But that is still lower than the current annualized rate of 2.32%, available for I Bond purchases through April 30.

The inflation-adjusted variable rate lasts six months, and is combined with an I Bond's permanent fixed rate (currently 0.50%) to create an I Bond's composite rate.

Here are the numbers used in the variable-rate calculation:

I Bonds purchased before May 1 will receive the current fixed rate of 0.50%, along with a variable rate of 2.32% for six months, and then 1.40% for six months. Overall, that will provide an average return of about 2.4% over one year.

I am recommending buying I Bonds up to the full allocation ($10,000 per person per year) before May 1, to capture that 0.50% fixed rate, which is highly likely to fall when it is reset on May 1. The fixed rate is permanent, lasting until the I Bond is redeemed or matures in 30 years.

I'll be writing more about the fixed rate and overall I Bond prospects in an article later this week.

The Consumer Price Index for All Urban Consumers increased 0.4% in March on a seasonally adjusted basis, the BLS reported. Over the last 12 months, headline inflation increased 1.9%.

Both of these numbers were higher than expected. The consensus estimate was 0.3% for March and the 12-month estimate was 1.8%. 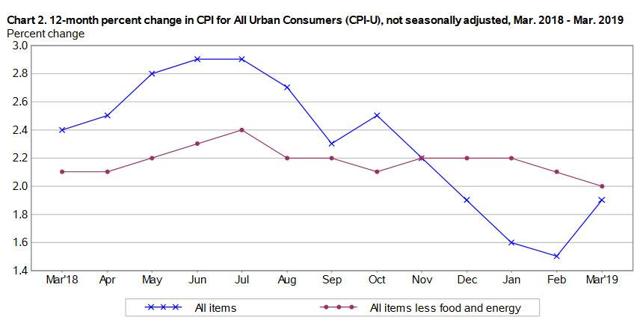 Balancing off these increases was a sharp 1.9% decline in apparel prices, which are now down 2.2% over the last year.

What this means for TIPS

The March index for non-seasonally adjusted inflation of 254.202, up 0.56%, means that principal balances for all Treasury Inflation-Protected Securities will rise 0.56% in May. Here are the new May inflation indexes for all TIPS.

The March numbers can be considered a wash. Energy prices drove headline inflation up sharply, but core inflation moderated and came in lower than expectations. This morning's U.S. stock market futures are predicting a slight increase at the opening, meaning this report isn't swaying the markets.