A key subsidiary for the Berkshire Hathaway (NYSE:BRK.A) (NYSE:BRK.B) parent company is Berkshire Hathaway Energy or BHE. My thesis is that the unadjusted free cash flow for BHE will be substantial in the future. If current spending plans stay in place, then this will be especially notable starting in 2021. Presently, much of their capex is growth as opposed to operating/maintenance and this can obfuscate the underlying economics. 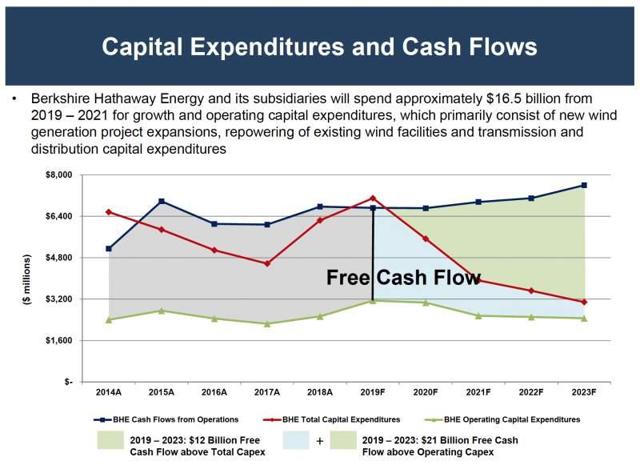 Page 103 of the BHE 2018 10-K shows the 2016 to 2021 capex numbers in a table (in millions). The breakdown between growth/investment capital in the first 3 rows and operating capital in the fourth row is important:

Much of the investments are in wind generation growth and this spend is expected to decline in 2021.

I think there was confusion about operational capital vs. growth/investment capital in the Spring 2014 meeting when a shareholder asked the following:

For the MidAmerican Energy segment, when I take earnings before interest and taxes and add back depreciation expense and subtract capex, the result is negative operating cash flow.

When I repeat that exercise for each of the past five years, in its best year the segment generates $308 million of operating cash flow. When I divide that by tangible assets, the result is a return on tangible assets of 0.86 percent.

Why are we allocating capital to a business that in its best year generates a return on tangible assets of less than 1 percent?

As the shareholder said, page 64 of the 2013 annual report from the parent company shows that $1,806 million earnings before taxes plus $1,577 million depreciation minus $4,307 million capex is a negative number for BHE. I believe the $1,806 million is after interest as opposed to before interest, but the point I'm trying to make here involves capex. Much of that capex number is growth or "added capital investment." As such, adjusted fcf where we don't subtract growth capex tells us more about the underlying economics than unadjusted fcf.

The first part of CEO Warren Buffett's answer is as follows:

You were doing great until you got to return on tangible assets. The - we love the math that you just described, as long as we are going to get returns on the added capital investment. And we are in businesses, whether it's wind energy in Iowa or whether with PacifiCorp after we bought it, there were lots of opportunities for capital investment. And the energy which we bought, we're looking forward to putting more capital in because as long as we get treated fairly by the regulators in the states that we operate, we will get appropriate returns on that.

And the return is not measured by the cash minus the increased capital investment we're making. It's measured by the operating earnings after depreciation. And there will be times in our businesses where no net investment may be required. But we actually prefer the ones where net - in the utility business - where net investment is required because we like the idea of getting more capital out at reasonable returns.

The "added capital investment" part of the answer above is key.

Buffett goes on to further clarify that much of the capex is investment/growth:

But if you compute net cash generated from those, you will see nominal or negative figures for a considerable period as we add to our investment and we make those utilities even more useful for people in those jurisdictions. I think we'll get a fair return.

Generally when we look at our utilities, we do pay attention to our capital, we try to keep it very close to our depreciation. That's what we put back into the business. We'll even earn on that capital, but the reality is the lion's share of our capital right now is growth capital. And we earn a very nice return on that. 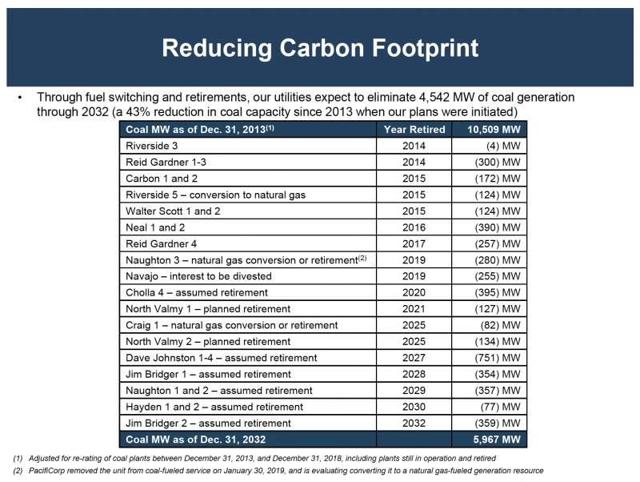 In the Spring 2012 meeting, it is noted that the federal subsidy for wind is 2.2 cents for ten years per kilowatt hour. Buffett talks about the fact that Berkshire with its serious tax appetite is well positioned to use the wind subsidies:

I don't have the figures, but I would guess that perhaps 80 percent of the utilities in the United States cannot reap the full tax benefits, or maybe any tax benefits, from doing the things that we just talked about because they don't pay any federal income taxes.

They've used bonus depreciation, which was enacted last year and where you get 100 percent write-off in the first year. They wipe out their taxable income.

And if they've wiped out their taxable income through such things as bonus depreciation, they do not - they cannot - have any appetite for wind projects where they get a tax credit or - in the solar arrangement.

Tax appetite of Berkshire Hathaway has allowed us to receive significant cash tax benefits from our parent of $884 million and $636 million in 2018 and 2017, respectively

I think Berkshire shareholders are in good shape with respect to the wind investments that are a major part of the BHE capex. Wind generation isn't a panacea for our energy issues - the wind doesn't always blow and the economics don't work without subsidies. Still, Berkshire should get a satisfactory return on the growth capex investments in wind generation.

Disclaimer: Any material in this article should not be relied on as a formal investment recommendation. Never buy a stock without doing your own thorough research.

Eric Sprague
3.37K Followers
I'm an individual investor heavily influenced by Warren Buffett and Charlie Munger. Munger's 1994 USC Business School Speech is something I think about a lot: ### Over the long term, it's hard for a stock to earn a much better return than the business which underlies it earns. If the business earns 6% on capital over 40 years and you hold it for that 40 years, you're not going to make much different than a 6% return—even if you originally buy it at a huge discount. Conversely, if a business earns 18% on capital over 20 or 30 years, even if you pay an expensive looking price, you'll end up with a fine result. ... Another very simple effect I very seldom see discussed either by investment managers or anybody else is the effect of taxes. If you're going to buy something which compounds for 30 years at 15% per annum and you pay one 35% tax at the very end, the way that works out is that after taxes, you keep 13.3% per annum. In contrast, if you bought the same investment, but had to pay taxes every year of 35% out of the 15% that you earned, then your return would be 15% minus 35% of 15%—or only 9.75% per year compounded. So the difference there is over 3.5%. And what 3.5% does to the numbers over long holding periods like 30 years is truly eye-opening. If you sit back for long, long stretches in great companies, you can get a huge edge from nothing but the way that income taxes work. ### Feel free to follow me on twitter: https://twitter.com/ftreric
Follow

Disclosure: I am/we are long BRK.A, BRK.B, VOO. I wrote this article myself, and it expresses my own opinions. I am not receiving compensation for it (other than from Seeking Alpha). I have no business relationship with any company whose stock is mentioned in this article.