I’ll make no secret that I’ve not been a fan of Frontier Communications (FTR) in the past. As recently as the end of January this year, I suggested the stock offered little value to shareholders. However, I try to look at each situation with a fresh perspective. As of now, Frontier seems to offer investors a light at the end of the tunnel. The company’s outlook for 2019 doesn’t exactly inspire confidence, yet 2020 may be a different story.

Adjusting for the adjustments

The first reason Frontier may surprise investors is the company is making good on cutting expenses. Many professional investors believe that companies have gone too far using adjustments, goodwill impairments, and restructuring, to change their results. Investors are likely to be skeptical of Frontier’s earnings with explanations like:

“We continue to expand the scope of initiatives underway in our transformation program in the fourth quarter, and multiple teams are now scaling a range of solutions that were developed through transformation initiatives.” 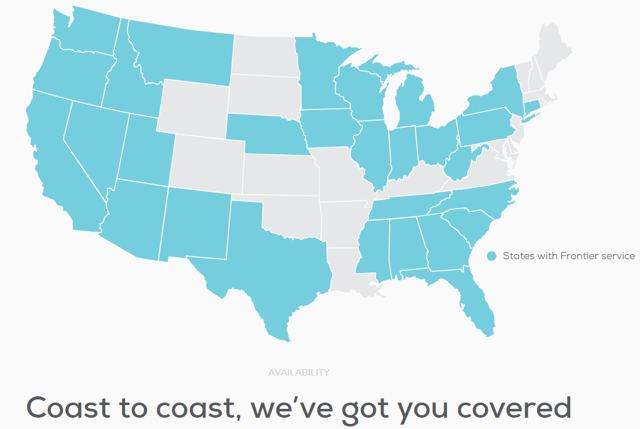 All investors really want is an update on progress being made toward the company’s, “targeted $500 million EBITDA benefit.” We can compare the fourth quarter of 2017 to 2018, and when we cut through some of the one-time adjustments, the bottom line is better than many realize.

Frontier is struggling to keep customers and witnessed an annual revenue decline of 4.2%. On the expense side of the coin, there are a few numbers we can compare and strip out other expenses to see if Frontier is intent on improving its bottom line.

With revenue down just over 4%, we can see that three of Frontier’s four core expenses fell at a faster rate. It also seems Frontier may have opportunities to cut costs in the SG&A line item to improve its expense profile further. The challenge for investors is attempting to figure out what’s real and what’s not, when it comes to costs like goodwill impairments and restructuring costs.

There are two schools of thought related to goodwill impairment charges. One is that a goodwill write-down is a non-cash cost, so it looks like a negative, yet doesn’t take money away from the company. The second thought is how can investors believe in the asset side of the balance sheet if the company must write down these assets on a regular basis? Last year, Frontier wrote down over $2 billion in goodwill. By September 2018, this number dropped to $400 million, and in the current quarter, it dropped again to $241 million. If the company can continue to eliminate this non-cash expense, investors will get a cleaner look at its operations. Frontier claims it is making progress on generating hundreds of millions in additional EBITDA. With the company cutting expenses faster than its revenue declines, it seems investors can believe management is trying to make good on this promise.

The second reason Frontier may surprise investors is the company is paying down debt and reported positive core free cash flow for 2018. One of the issues facing Frontier is the company’s debt balance. Though the company’s 2019 outlook doesn’t seem too exciting, investors don’t need excitement, they need stability.

Frontier is calling for Adjusted EBITDA of $3.45 billion to $3.55 billion. By point of comparison, if we multiply the company’s most recent EBITDA times four quarters, we get $3.58 billion. It seems Frontier expects EBITDA to drop by somewhere between just under 1% and about 3.6%. However, the company also expects interest expense to drop slightly compared to 2018. Frontier paid $1.5 billion in interest during 2018, whereas, in 2019, the number is expected to drop to $1.48 billion.

Looking at debt balances, there are two reasons to believe Frontier can make further progress improving its leverage profile. First, though some may find it hard to believe, the company repaid more debt than it took on during 2018. Looking at long-term debt, the company retired a net of $675 million. On the short-term side, the company borrowed a net of $275 million. If we combine these figures, the net paydown is about $400 million. Though the company did have some expenses to retire this debt, on a year-over-year basis, its long-term debt declined by just under 3% annually.

Another factor some investors may be ignoring is the fact that Frontier generated positive core free cash flow over the last twelve months. If we eliminate goodwill adjustments and the company’s significant income tax benefit last year, the bottom line is encouraging. This year, Frontier’s core free cash was about $358 million. Given that Frontier accomplished this feat with a similar EBITDA to what it is predicting for 2019 suggests that debt should be retired even further this year.

Real growth may be a year away

The third reason Frontier may surprise investors is the company could be about a year away from real revenue growth. I’m aware that many investors have been waiting for Frontier to return to growth for a long time. However, there are a few clearly definable trends that suggest the company is making real progress. At first, the trend is hard to find looking at Frontier’s overall performance.

On the surface, Frontier’s overall revenue trend line has been down. However, if we look further into each division’s performance, Frontier is doing a lot more than talking about better performance, the company is delivering.

We can clearly see that data and Internet revenue seems to have turned a corner over the last year. While voice revenue is likely to continue to decline because of secular headwinds, the rate of decline has been cut by more than half during 2018. Video revenue had a challenging first three quarters, but the fourth quarter showed a significant improvement. If we take these trends and project them forward, the bottom-line result suggests real growth is right around the corner.

Given that Frontier has been showing continued improvement in its data and Internet business, a conservative approach suggests a similar annual growth rate for this business during 2019. On the voice side of the house, it’s doubtful that continued improvement will continue, but it seems possible that Frontier may keep its annual loss rate at about 2.8% as in the fourth quarter. Where video is concerned, Frontier could continue to improve its losses in this area. Though traditional video has been challenging, a 2% further improvement per quarter in the loss rate seems achievable.

Using these assumptions and applying them to 2018’s revenue per quarter, Frontier’s overall annual revenue decline would improve with each quarter. Keep in mind, these calculations exclude “other revenue” and “subsidy and other regulatory revenue.” However, the combined net decline between the two line items represented less than 3% of the company’s current quarter revenue.

With this caveat in mind, Frontier’s annual revenue looks something like this in the next four quarters.

(Source: author’s assumptions based on above information)

As we can see, through 2019, Frontier’s overall revenue decline may steadily lessen. Some investors think of Frontier as a lost cause and just a local telecom company. However, some of the numbers suggest this “lost cause” still has life.

Frontier is committed to cutting expenses and has the numbers to prove it. The company’s projections for 2019 suggest a year of steady, slow improvement, and paying down debt. Two of the biggest overhangs for Frontier are its debt load and negative revenue growth. The company may begin to solve both problems in 2019. The stock isn’t for the faint of heart. Yet investors looking for a turnaround, with some numbers supporting the story, should give Frontier serious consideration.

Michael Henage
3.96K Followers
I've been investing for over 20 years and have written over 1,300 articles about investing and stock analysis. I'm a tech nerd and a completely obsessed NFL fan.
Follow