Netflix (NASDAQ:NFLX) performed admirably during 2018, and I expect it to perform quite well in 2019. Beyond 2019, growth and profitability will suffer, and the price will go down.

When the dust settles, Netflix could be King of entertainment, but it will face a tough start of the decade. In 2020 Netflix will have to compete against Disney (DIS), AT&T (T), Comcast (CMCSA), Amazon (AMZN), Apple (AAPL) and Google (GOOG) (GOOGL) while getting the content it relies on at a much higher cost.

Since February of last year, I have been using the mathematical model of how diseases spread in a population to predict how Netflix will grow its subscriber base. This behavior presents an S-Shaped graph. 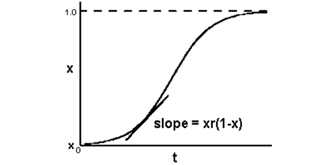 Through the year I have made small tweaks to the model; the accuracy has been consistent, but the minor tweaks have provided little to no benefit to the model.

Considering the little effect the tweaks have had in improving the accuracy of the model, and the already high accuracy the model has, I believe there will be no need to tweak the model further. For 2019, the model predicts that Netflix could reach 169 million subscribers and $19 billion in revenue, which is quite impressive.

I like to use Peter Lynch's ratio when valuing a stock. This method uses the ratio between the expected earnings growth plus dividends and the P/E of the stock to determine its fair value. A stock that has a 1:1 ratio is reasonably priced. The higher the number, the more underpriced the stock is.

Considering the earnings growth for the next two years, we can evaluate the fair price Netflix would have if it performed within the low, medium or high range of estimates. 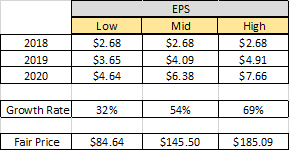 Even if Netflix managed to deliver on the higher end of the forecast, the stock would be trading at about twice its fair price. It is not unusual that companies with significant potential trade much higher than their reasonable price, as the potential payout is more elevated, but double its fair price seems to be too much. 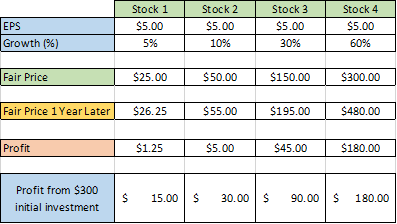 The chart above illustrates that a stock that as a 60% growth would give twice the payback as a stock that has a 30% growth. This effect is why high growth companies often have more demand and a higher price than the theoretical fair price. But a company that grows 60% and trades at double its fair price would give the same profit than a fair priced company that would only grow 30% annually.

If Netflix was only overpriced but had solid growth prospects, one could rationalize that in the long term the stock will grow much higher and the fair price is irrelevant. But the sick model predicts that Netflix will not be able to keep its impressive growth rate for much longer.

The Sick model has a relatively good precision in the quarter to quarter basis, but its real strength is on its long term capabilities. Even considering that nothing was to hinder Netflix's growth rate, from 2020 to 2025 Netflix would have a growth rate of 15.8% while from 2025 to 2030 its growth rate would be less than 5%.

A stock with a PE of over 100 with an expected growth rate of slightly more than 15% in the near future is disheartening. Even more so if we remember that this is the sunny side up valuation that disregards the effects of Disney, AT&T, Amazon, Comcast, Google, and Apple entering the same arena and fighting for a piece of the pie.

The prediction of the Sick model is quite generous considering the macroeconomic implications it has. The average household has about is about 3.5 members, and the Global population estimate for 2030 is 8.5 billion. 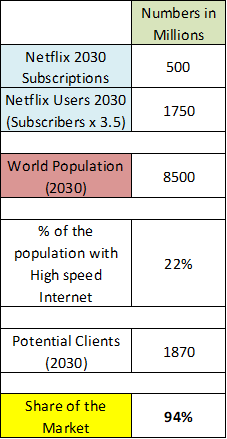 The current price of Netflix is held by the high expectations of its future earnings growth. The forecast is overly optimistic and assumes that Netflix´s subscriber growth and profit margin will be unencumbered by the many changes the industry will face at the end of 2019. 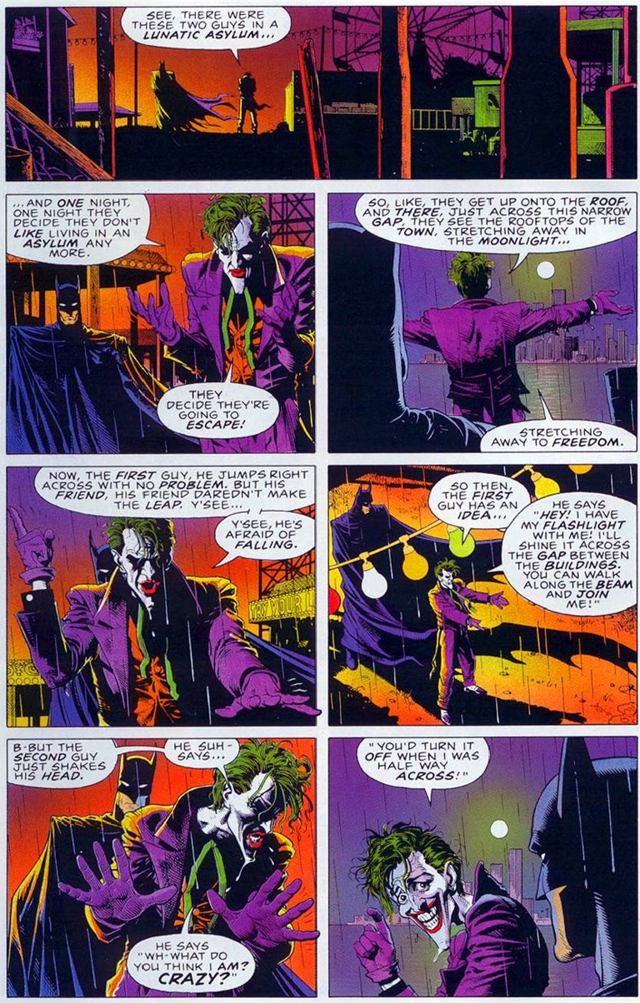 Similarly to the joke above, the earnings forecast in which Netflix valuation and price is based is not reliable. The company will not be able to cross to the other side and keep its growth rate and profit margin intact. What is more worrying is that even if it managed to pull through, it would still be highly overvalued.

Netflix stock is priced as if it were to grow 120% annually when it will optimistically grow 60% for the next couple of years, and realistically its growth will be lower than 30%, and for the years after that, the growth will go to about 15%.

Reed Hastings changed the entertainment business the same wayBilly Beane changed baseball. But the Oakland A´s didn´t win the world series; the Red Sox used Beane´s method and won. Disney and AT&T were behind Netflix on implementing a streaming service, but they are moving fast now and are better positioned than Netflix. Netflix could be luckier than the Oakland A´s, but the stock price will suffer nevertheless, as it is severely overpriced and its forecast is overly optimistic.

If there is anything in this article you agree or disagree with or would like me to expand further, I would sincerely appreciate you leaving a comment. I will address it as soon as possible.

Disclosure: I am/we are long GOOG, DIS. I wrote this article myself, and it expresses my own opinions. I am not receiving compensation for it (other than from Seeking Alpha). I have no business relationship with any company whose stock is mentioned in this article.