A lot of noise has been made about the sustainability of the current yield of Buckeye Partners (NYSE:BPL). However, the steadily declining partnership yields as the common unit price increases argue against such a scenario. Instead, a decent long-term investment strategy has probably begun. But it may take some time for the negative market attitude to vanish from the investment scene.

Therefore, it is probably time to pay attention to the unit price which has made serious progress from the 52-week low to determine what some investors may know that the whole market has yet to perceive. The rising unit price actually would indicate a slowly decreasing concern of another unit distribution cut.

Such a scenario implies that either the cash flow is sufficient or there is a lot of borrowing capacity and liquidity to see the partnership through whatever concerns may worry some observers. In this case, cash flow will probably get some aid from an unexpected source.

Many managements play a very old game to prop up common unit prices. If there is a bad year, the company writes off every conceivable possible problem. In fact, management may invent a few problems just to get rid of any unpleasant surprises while obtaining the ability to post above-average results after the horrible fiscal year is over.

The general rule of thumb is that write-offs in a bad year are extremely conservative. In fact, those conservative assumptions in bad years may easily be the most conservative in the industry that generally exceed any possible trouble in the view of the average seasoned observer.

What that means is that some still potentially useful assets get impaired to zero value or an extremely conservatively low value because the current scenario (though temporary) is gruesome enough to justify that zero value if one does not look at a potential recovery or conservatively assumes the recovery (if any) is well into the future.

In line with this strategy of being conservative, the partnership announced a $537 million goodwill impairment charge taken in the third quarter of fiscal year 2018. A charge such as that covers many possible scenarios. Possibly the goodwill should have been slowly adjusted over time and was not. Therefore, the current announcement is a non-cash adjustment to current realities. More than likely, management took advantage of the latest weakness in the business to pose the worst possible (or impossible) future scenario for these assets and then valued them accordingly.

Since American accounting standards do not allow for a future increase in value to reverse such a dire scenario, management can earn income from assets that were deemed impaired or even useless. Sometimes that income far exceeds the impairment projections. After all, estimates leading to impairments are just that. Now that the storage business is recovering, time will tell just how profitable those impaired assets really are.

This allows management to make the division and the company looks more profitable than it really is. That is why impairments need to be allocated to the proper future and past quarters covered. Those Caribbean assets are extremely likely to earn some income in the future as the storage market returns to a more profitable level of business. After all, management never stated they would dispose of the assets. They only stated they were valued less than in the past.

The immediate problem was caused by the decline of the Venezuelan business and the inability of this once prime customer to pay its bills. Maybe a replacement customer will take a while to find. However, South America has plenty of potential candidates like Brazil and Colombia. Mexico also has some areas leased to private industry that eventually may need storage. Therefore, the future of those assets may not be quite as dire as management presented during the conference call. This old game has been played many times. 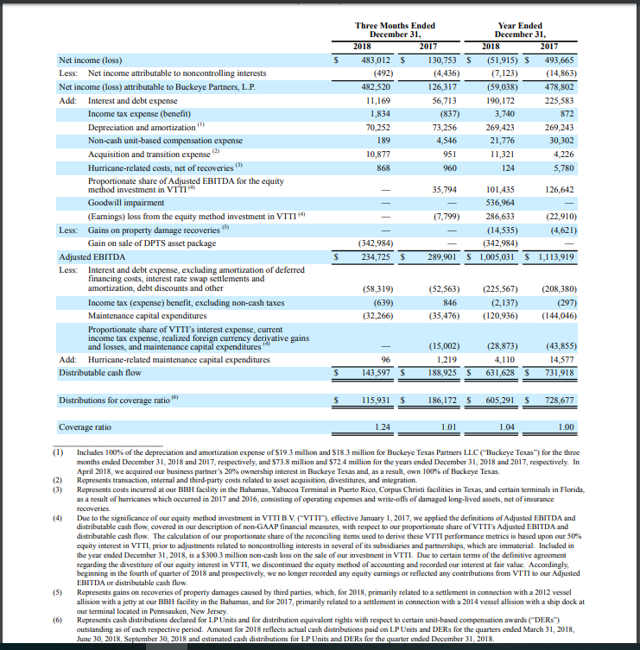 Notice that EBITDA and distributable cash flow did decrease. However, the decrease is not such a fantastic amount that it will take years to make up. Already, the terminals and storage part of the partnership are experiencing a cyclical strengthening of the market served. It honestly makes one wonder that if management had “stayed the course” this situation would have self-corrected.

However, there were customer needs to attend to. The capital available was insufficient given current market conditions. Management was unwilling to give up the coveted investment grade status that very few partnerships have. Therefore, corrections had to be made and future project upgrades were needed. This partnership was one of the last industry holdouts to modernize the partnership operation to sufficiently cover distributions.

Unfortunately, investors paid the price for that delay. Management clearly had market-mandated coverage of the distribution in the fourth quarter. Note that this partnership does have some seasonal businesses. So, the summer months could report weaker coverage because the butane business is primarily a fall and winter season business (for example).

Offsetting the seasonality will be the completion of several capital projects in the cue. These will add to cash flow throughout the year. The profitability and additional cash flow will aid in the ratios shown above in the fourth quarter. Furthermore, the strengthening of the storage part of the distribution and storage business will also aid cash flow.

This company not only had to deal with the Venezuelan production collapse (and the inability of the country to pay its bills) it also had to navigate some divisions experiencing cyclical weaknesses as well. Management (to its credit) dealt with both problems. First Venezuela was kicked to the curb and the related assets were written down (probably just in case). Secondly, management minimized the potential damage caused by the storage business weakness.

Many have tried to include the incremental growth from the new capital projects without projecting the recovery that is already underway in the distribution and storage business. The partnership suffered other setbacks from which this management will recover. Management may need more than a year to complete a recovery, but that recovery will happen.

A change in direction was indicated as the pipeline business is booming. Therefore, expansion of the pipeline business is indicated. The expansion of the marine terminal business and corresponding storage business needed to slow until the market cyclically recovered. Ironically, management needed to bargain hunt in this area instead of building new capacity through the VTTI subsidiary. Now, that is “water over the dam.” Still the marine terminals division probably has a bright future, just not right now.

The change to greater distribution coverage is probably permanent. It is also market mandatory for the foreseeable future.

As for valuation, the partnership valuation will undoubtedly change. This management ran a premier partnership whose shares traded at a market premium for years. Investors should expect the market relationship of old to be gradually restored as management re-establishes its track record.

That would mean a partnership unit increase over the next few years until the yield is back in the 6% range (roughly). It also means that management intends to restore the distribution growth of past years. This management generally increased the distribution one penny every quarter. At the very least that minimal expectation will happen.

Management is far more likely to take advantage of the Permian boom by investing in some fast payback capital projects that would result in a faster distribution recovery to old levels. There are additional shares outstanding but there is also a lot less debt and problems to deal with.

A combined appreciation and distribution rate of return would reasonably approach at least 15% per year from current levels. The initial recovery of these units should far exceed that objective as the year progresses and is highly unlikely to be less than that 15%. Many times the same market that feared the unit price downturn does not anticipate the unit price recovery now underway.

There have been some articles about the cash flow not covering the capital budget. However, the capital budget was never supposed to fund the entire expenditure. This partnership, like most in the industry will use a combination of debt and cash to fund the capital budget. The amount of cash reinvested in the business needed will depend upon the profitability of each project. Since management rarely discloses those figures, investors will have to rely on management that they have this covered.

Once a new record of accomplishment of success is established, then some traditional valuation models will work better. For now, it is clear that management is working its way out of the financial hole it dug. That is very good news for new investors and long-term investors.

I analyze oil and gas companies and related companies like Buckeye Partners in my service, Oil & Gas Value Research, where I look for undervalued names in the oil and gas space. I break down everything you need to know about these companies -- the balance sheet, competitive position and development prospects. This article is an example of what I do. But for Oil & Gas Value Research members, they get it first and they get analysis on some companies that is not published on the free site. Interested? Sign up here for a free two-week trial.

Long Player
15.9K Followers
Author of Oil & Gas Value Research
Get analysis on under followed Oil & Gas companies with an edge.
I am a high school teacher for a decade. Before that I was an analyst (operations and financial) and for a short time a Controller I have a B.S. with an emphasis in Accounting and an MBA (for which I studied Finance, Economics, and Management) I passed the CPA exam on the first try and am a retired CPA in the state of Maryland. I have a high school teaching credential and an MA in Math Education

Disclosure: I am/we are long BPL. I wrote this article myself, and it expresses my own opinions. I am not receiving compensation for it (other than from Seeking Alpha). I have no business relationship with any company whose stock is mentioned in this article.

Additional disclosure: I may buy more BPL at any time.

I am not an investment advisor, and this article is not meant to be a recommendation of the purchase or sale of stock. Investors are advised to review all company documents and press releases to see if the company fits their own investment qualifications.